This morning Tony woke me up early so I could do the Harley Show. The first thing I did after Tone took off to go drink coffee with his friends at the Old Timer, in Medina, was check my e-mail to see if my friend Fay, in Toronto, had sent me a note about seeing Kinky's show last night in Toronto. And she did!

"Hi Nance,
I just got home from seeing Kinky, it was AWESOME! It was a packed house, he has many, many fans in Toronto who just love him. He was so entertaining and he read from his book, told jokes and sang so well. The crowd adored him and there was a lot of excitement and a huge line up to get autographs and photos with Kinky. He was so great with everyone and signed anything that people brought.

I brought an album and one of his books that he autographed, I'm THRILLED.

The best part Nancy? During the show he wished me a Happy Birthday and talked about me adopting Kris Kristofferson from the Utopia Animal Rescue Ranch. I was so surprised, thrilled and I felt like a Goddess ; )) Then Kinky sang "They Ain't Making Jews Like Jesus Anymore" for my birthday song. I will be on Cloud Nine and will be until June (my birthday is May 31st LOL). I gave him some photos of Kris and he laughed when he saw them.

It was a magical and fantastic night, I am so happy to have finally met Kinky. He's wonderful!


And here are the pictures she sent. 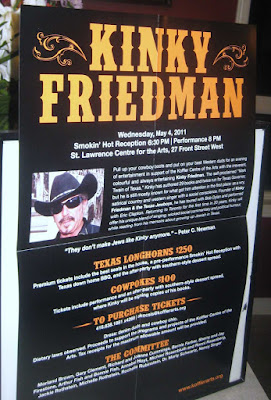 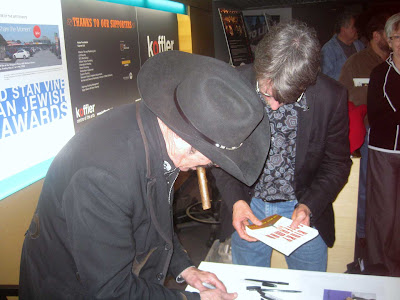 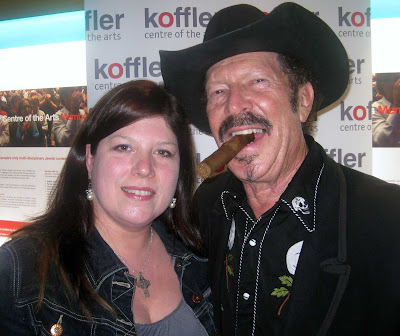 I am so glad that Fay had so much fun and I am so glad that Kinky finally got to meet her and talk to her about Kris Kristofferson. Thank you, Fay for the note and the pictures! I wish that I could have been there, but I don't fly.
Posted by cousin nancy at 8:20 AM