It's around two o'clock and I think I've decided to go up to Austin to visit my family and spend the night, but I'm not sure if I should just wait and go tomorrow as we had planned earlier or to start packing and get on the road.

A while ago I was tinkering around on Facebook and trying to figure out how to upload that cute picture of Tony and Belle, as one, in Kermit, after her swim, that I posted a few days ago, so I asked T. if he could show me how to do it. "I'm sorry, but I don't know how to do that, Nance. I just create photo albums."

Two minutes later I half-hollered down the hallway, "I did it Tone! It's up!" Tony and Belle Starr-Simons came running into the kitchen to see what was up. After they saw themselves on my Facebook Tony asked me to teach him how to do it and I did in less than thirty seconds.

Before T. took B. outside to "go potty" on command, I jokingly said, "That's pretty funny. Tony. You were the one who was supposed to teach me how to do Facebook and instead I just taught you." He sort of laughed and then he and his dog went outside so B.S.-S. could water the dirt, where grass once grew.

"I just did it!" Tone just hollered from his office. "I just posted a cute picture of Belle on Facebook. Check it out." I did and it was cute, but not as cute as the one I posted earlier on Facebook of Belle. I love this picture. 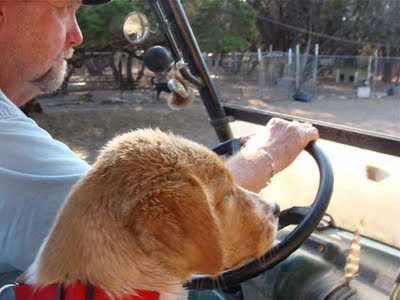 Now I must decide if I am going to take off for Austin now or leave early tomorrow morning. I am going to schedule this blog to post at eight o'clock tonight, in case I'm already up in Austin enjoying my family. I'll be back late tomorrow afternoon one way or the other.
Y'all have a great evening!
Posted by cousin nancy at 8:00 PM