I wrote this yesterday, but when I tried to post it yesterday I couldn't because Google Blogger was down for maintenance repairs. So here is what I wrote. Tonight I will blog about my hilarious morning that I spent with Eileen, Ellen and June, our super volunteers.

Today has been really great, because it rained early this morning and we got one inch of rain! When I called Harley, at seven forty-five to do his show, I was a nervous wreck, because it was thundering and lightning furiously outside and I never talk on the phone during thunderstorms, because of the risks of getting hit by lightning. But this morning I took the risk, so I could do Harley's show to talk about Gonzo, his Pet Of The Week and our rescue ranch, but I had a surprise coming. 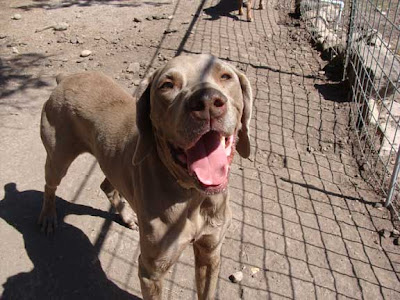 Off air I said, "Hi, Harley! It's Cousin Nancy. How are you?"
"Hi, Cousin Nancy. It's T-Bone. Harley's off today..." My Utopia segment of the show was fun with T-Bone, even though I couldn't wait to hang up on him, because of my fear of getting struck by lightning, like my uncle did many years ago.
The reason that I didn't post a blog last night was because I sort of got tangled up. Around six o'clock, after Frank and Tony had assembled my new loom for me, I thanked them for putting it together for me and then I named my small, beginner's loom, Little Loopy, then I started preparing (warping) it, so I could weave something.
I figured it would be pretty quick and easy to do, but as usual I was wrong. First, I had to pick out the colors of yarn to use, which were covering the drain board and the stovetop.

Then it took me over one hour and five minutes to measure and cut the yarn pieces to the same width and then it took me another hour to warp Little Loopy, and by the time I was done with all of that I was feeling a little loopy. 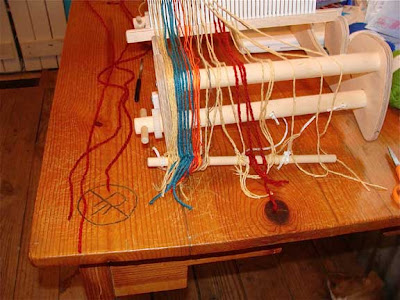 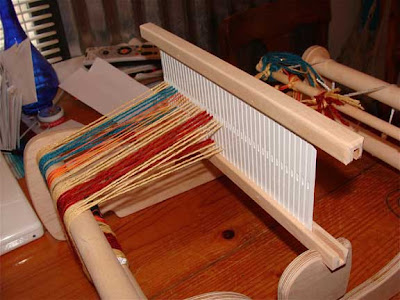 The last thing I had to do before starting to weave back and forth was to wind the stick (shuttle) with yarn, which would pass through the warp. Because I did not want to have to reload the stick/shuttle with more yarn, in case I needed more to finish my project, I used the entire roll of yarn, which turned out to be stupid, because it was so fat—it would not pass between the threads.
Not knowing what to do with the excess yarn, I decided to roll it into a ball as I unwound my over loaded shuttle and that cost me forty-one minutes. 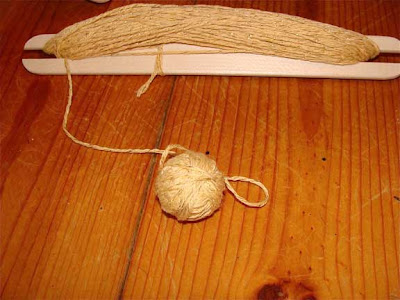 Then I finally started weaving or should I say, "Trying to weave."
The first three inches of my new project was not easy, because of loose threads and it looked pretty bad, but after that my weaving improved inch-by-inch. At the seven-inch mark Tony walked into the kitchen and said, "Nance, will you make me a hatband?" Then he walked over and looked at my "weaving work" and then he quickly added, "After you have practiced a few more times." Three inches later I quit and went to bed.
As I laid in bed, counting threads, I couldn't quit laughing about Little Loopy and the "work of art" that I was creating and before I fell asleep I had decided to mail it to Cindy, as a joke, with a card that reads: "I hope that you love what I have woven for you, because I spent an entire evening making this for you. I hope you love as much as I do and you will hang it in your big room, so everyone can enjoy it. I'm so proud of it! Love, Nance." 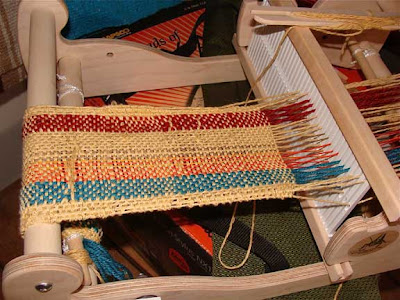 Because of all of the time that it took me last night before I could even start to weave, I've realized that smaller projects are for me, like using half the threads, instead of the forty I used, are about all that I care to weave on Little Loopy, because from here on out, we're talkin' hatbands, bookmarkers or potholders."
This evening Kinky called me from Washington D.C. to check in. He's having a blast on his tour and tomorrow night he will be performing at the Birchmere.
Y'all have a great evening!
Posted by cousin nancy at 12:56 PM

I think Kinky needs to sign Tony up for his next tour, he sounds like he could make a very good comedian. As to your loom, I think if you stick it out that you will become very good at making great bookmarks and hatbands :)
Have you ever thought about getting a speakerphone so you could talk hands free during a storm?
I havent had a chance to chat with you for a few days, my daughter brought me a newborn orphan kitten about 2 weeks ago and I have spend so much time being a kitten mom. But he is just so cute that I couldnt say no.