This morning I walked six fast miles! I then returned some phone calls and e-mails. It was now finally—My Time! I had just begun working on my book, when the phone rang—it was Kinky. "Nance, I just found a German paperback version of 'Meanwhile Back At The Ranch,' and you have got to come over and see it! Our names are all over it and it is pretty funny."

Twenty minutes later, I was over at the Lodge. After unloading some more of Tony's organic—tomatoes, onions, jalapenos, and zucchinis onto Kinky's kitchen table, I thumbed through the German paperback, finding Tony's and my name—here and there. I love that book—it is one of my favorite Kinky books. Kinky dedicated that book to Tony and me, and when I saw the dedication written in German, it made me grin! Here is a picture of the German Paperbook and the English version. 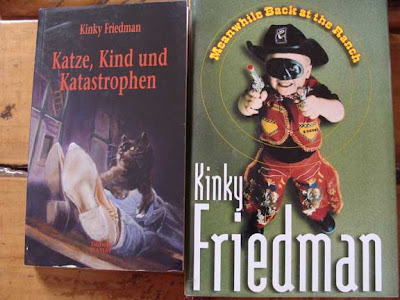 After looking at the book, Kinky and I went outside. He wanted to show me the bloom on his Texas Five Star Hibiscus, that our friends Rick R. and Leisa, from Port A., had given to him last year. It was beautiful and Texas sized, to say the least! 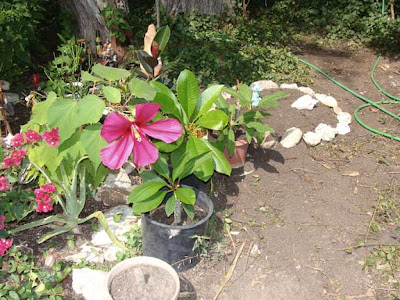 Kinky and I visited while he filled his hummingbird feeders. Before leaving the Lodge, Kinky invited Tone and me to join him for lunch—with Dylan, at Luby's. I accepted the invite, because I knew it would be fun to see Dylan, and also because we needed to run some errands in Kerrville.

At one o'clock sharp, the four of us entered Luby's cafeteria. Our lunch was so much fun! Dylan told us some very interesting stories, while Kinky kept interjecting some really funny remarks. I was the last to finish my lunch, because they had me laughing so hard.

After our Luby's lunch, Tone and I went to Wolfmueller's Books. We wanted to hear all about their Fourth of July pignic at the Trails End Guest House. Sandy and Jon told us that they had a blast! They said the food was delicious, of course, and Beckham is now living the life of Riley over there—and he is putting on the pounds! That news made my day!

Our visit with Sandy and Jon was fun, and I hated for it to end, but we needed to get over to Copies Plus, to get some printing done. When we walked inside Copies Plus, Trisha greeted us with a smile! Tony and I just love her. We had a fun visit with her, while she ran off two hundred copies of a brochure for us.

Tony and I are fixin' to watch Michael's memorial service that I taped earlier today. Y'all have a great evening!
Posted by cousin nancy at 8:09 PM