Today has been one great, powerful day! This morning after I had walked six fast miles with Leslie, and gotten cleaned up—Kinky called. After he told me that Mr. Magoo was doing great, he asked me to come over to the Lodge for a visit, so I did.

Kinky and I talked about our books, Mr. Magoo and the rescue ranch, then we went outside to sit by the Friedman Family Bone Orchard. "Guess, who I have coming out to see me today?" Kinky asked. "The World's Strongest Man—Pound for Pound, and New York Ratso.

"New York Ratso!" I said, with excitement in my voice! "OMG! Can I meet him? I've never met him and I would love to! I saw him once, years ago, when Jim and I were backstage at Willie's Fourth of July Picnic, at Zilker Park, in Austin. In fact, I took a picture of you and New York Ratso performing on stage. He was wearing some kind of a long kimona or moo-moo. That was when Sammy Allred had to be lifted onstage with a forklift, because he had just had hip surgery. June and Johnny Cash, Waylon and Kristofferson were there, too. Do you remember?"

"Yes, Nance. You've got a great memory," Kinky said. "I want you to meet them, and for them to meet you and Tony.

"Who is the World's Strongest Man—Pound for Pound?"

"Dennis Rogers. Ratso and Dennis are writing a book together, about Dennis, and that's why Ratso is down here in Texas."

"Wow! I can't wait to meet them! When are they coming out?"

"After one o'clock. I will call you when they arrive."

At one-thirty, the phone rang—it was Tony. "Nance, I got Van Morrison inspected, and as soon as I load up these crates at Hoegemeyer's, I'll be heading home. I should be there within the hour."

"Great! I have your lunch ready to eat. Love you."

At one-thirty-two, as soon as I had put the receiver back into the cradle, the phone rang, again—it was Kinky. "Nance, come on over—they're here."

Three minutes later, I was at the Lodge! Kinky introduced me to New York Ratso, Dennis Rogers, and Dennis' lovely wife, Sylvia. To say the least—I was so star struck! We all visited in the Lodge for a few minutes, then Kinky suggested that we go outside to continue our fun conversation. At one point, while I was talking with Ratso, I asked him if he knew John Mankieiwicz—and he did! Kinky and I then told Ratso about John's fun visit, back in May! I was having so much fun! I was sick that Tony wasn't there with me.

Twenty minutes later, Kinky asked Dennis about him being the Strongest Man In the World—Pound for Pound, Dennis told him he would show him. Dennis grabbed his duffle bag, and pulled out the biggest, and longest nail that I have ever seen—then he bent it in half! It was incredible! Then Dennis tore two really big phone books apart! I had goosebumps! Then Dennis drove a nail through a really thick board, using his fist! Then Dennis takes a horseshoe out of his bag, and twists it into a heart for me! Everyone there was totally amazed! Then Dennis did the most incredible thing—he bent a hammer in half! His final show of super strength was when he locked himself up in shackles, chains and handcuffs and busted out of them! Dennis had nothing more to prove. He really is the Strongest Man in the World—Pound for Pound!

Dennis Rogers is so strong, that you must check him out at Dennis Rogers, the Strongest Man In the World—Pound for Pound! Fortunately, I had taken my camera with me, and I have posted three new videos, on the side bar—showing his strength. I hope that you will check them out! My favorite is him making my heart!

When Tony finally got there, Dennis gave us arm wrestling tips, and then he drove another nail into a board, and twisted another horseshoe into a heart for Kinky. Seriously, this fifty-two year old man was super human! He's been on Oprah, and David Letterman, too! Here is a picture of New York Ratso, me, Dennis and Kinky, and a picture of Kinky and Dennis arm wrestling in Kinky's office! The Hummingbird Man lost—hands down! 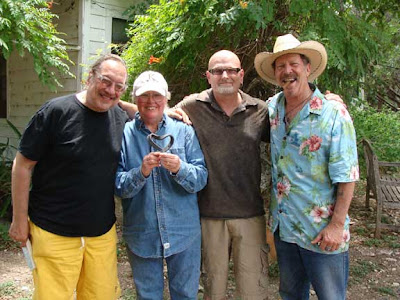 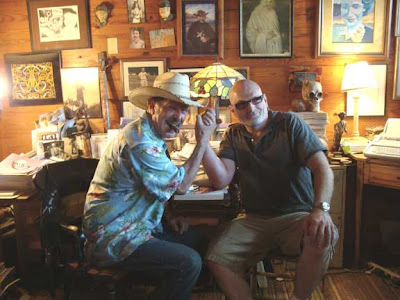 An hour later, before leaving the Lodge to come over to the rescue ranch, I had Dennis autograph my horseshoe heart! 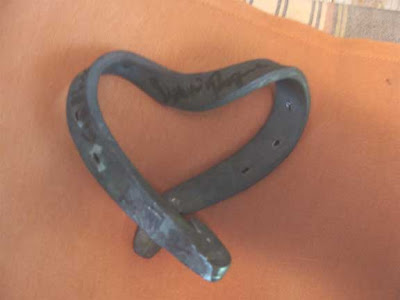 Kinky, New York Ratso, Sylvia and Dennis came over to the rescue ranch for a visit and a tour, and they went into Outer Space with us! They loved Outer Space, our trailer, the Space Ship and our rescue ranch! And, Rowdy /Roxie, our little Min Pin, stole Sylvia's heart!

Today was so much fun! And, I so enjoyed meeting Sylvia, Dennis and New York Ratso! I love them! Not to brag, I can now add three more famous people to my list of famous people, who have been inside the Nellybelle—and loved it!

Y'all have a great evening!
Posted by cousin nancy at 9:35 PM

Holy %#$& Nance, my day, which started with a dog attack and ended with my niece's Bridal Shower, complete with the ultimate gift of a "Slap Chop", pales in comparison to your day at the Ranch! Dennis is incredible, and, you met Ratso! I love Kinky's books, he's so funny and clever.

Good morning Fay! What is a 'Slap Chop?' And, I am so glad that you and Kris are okay! Dennis is incredible and I love my horseshoe heart! I can't decide if I am going to put it in Outer Space, the Space Ship or my writing cabin!