After my dogs had used me, for their human diving board, to leap off of the bed, I rolled out of bed. I went to the front door, let my furry-friends outside, and then I picked up the phone, and punched in Kinky's number. "Morning, Kinky," I said, sleepily. I just woke up." He and I talked for about three minutes. By the end of our conversation, we had us a plan. I would ride with Kinky, and he and Mr. Green Jeans would pick me up a little before eight-thirty, so we could be at the restaurant by nine o'clock.

After feeding our dogs and Lucky, I made some coffee, and then cleaned up. At eight-sixteen, there was a knock at our door—it was Kinky.

We had a really fun breakfast with Beth and her good friends, Norma and Mack. They were really nice, interesting people. Kinky had huevos rancheros, and I just had coffee, because I had drank my healthy smoothie breakfast, earlier. Following breakfast, Kinky ran a couple of errands, and then we headed back to the ranch.

Kinky and Green Jeans dropped me off at the rescue ranch around eleven o'clock. Our super volunteers, June and her friend, Kay, were here, and so was Jim! June and Kay were in the pens handing out treats, while Jim was out walking our dogs! I loved it, but not as much as our dogs did! Thank you, June, Kay and Jim!

Around twelve-thirty, the dogs outside—started barking! Without looking out the door, I knew who it was! Not because I am psychic, but because they had made an appointment earlier in the week. I picked up the phone and called Kinky! "Kinky, it's Nance. The Girl Scouts from Dripping Springs have just arrived with their doghouses!"

I grabbed my camera, and then left the trailer, so I could go greet them! When I arrived at the barn, I saw two of the prettiest, well built doghouses that I have ever seen, and then I met Sharon K., the sweet troop leader, in charge of their 'Bronze Award' project! Sharon's daughter, Rose, along with Girl Scouts Bonnie and Brady had built two super doghouses for us! The girls doghouses were beautiful, well engineered with air vents, and mighty heavy! I knew our dogs were going to love them!

I visited with Sharon, Brady, Rose, and Bonnie, and some other troop members, as Ben and Aaron unloaded the doghouses from the trailer. Then Kinky and Mr. Green Jeans arrived. Kinky was awestruck when he saw the super doghouses! While he shook hands and thanked the three girls for their hard work and fine craftsmanship, Sharon filled me in on Dunn, the little dog that she and her family had adopted from us, over three years ago! She told me that Dunn had turned out to be Rose's best friend, and they were inseparable, and he was spoiled rotten! I loved it! You might be wondering why I would name a dog Dunn. I named him and his little buddy, Brooks and Dunn, because I like their music.

After Kinky had admired the doghouses more closely, we had an awards ceremony! Kinky proudly awarded the 'Bronze Award' medals to Rose, Bonnie and Brady—thanking each girl, and then shaking their hands. I have to admit that it brought a tear to my eyes, but no one noticed because they were tearing up, too. Here's a picture that Tone took of the event! 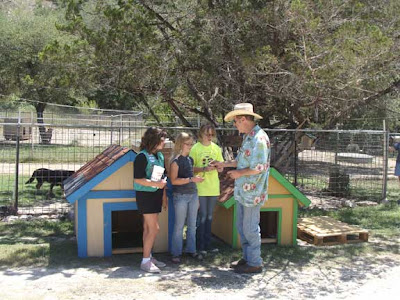 After the award ceremony had ended, Rose went to the car, and she returned with a giant sack, and a big box, full of dog toys, that she had spent her birthday money on—for our dogs! And yes, I teared up, again, but no one knew it, except for Tone, who took this picture. 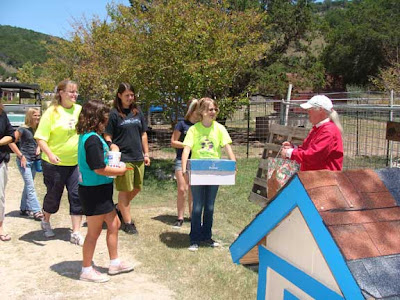 After sorting through the cool doggie toys, Sharon and the Girl Scouts went from pen to pen handing out Rose's collection of toys to our dogs! It was fun watching our dogs receive their toys and playing with them!
After all of the toys were given away, the girls wound up sitting in Oprah, Ellen Degeneres and Bandit's pen—playing with the happy pups!

When it was time for the Girl Scouts Troop 619, from Dripping Springs, Texas, to leave, we thanked them for being such great girls. And, before leaving the rescue ranch, they promised to return in a few months to volunteer! All that I can say is, "Troop 619 Really Rocks Big Time! We love y'all! Here are pictures of the new doghouses in the dog pens and Pearl playing with her new toy! 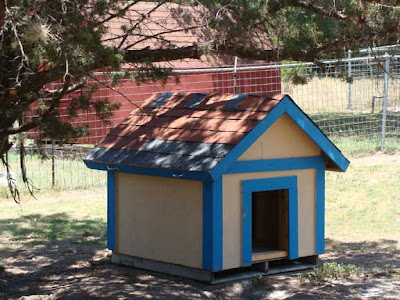 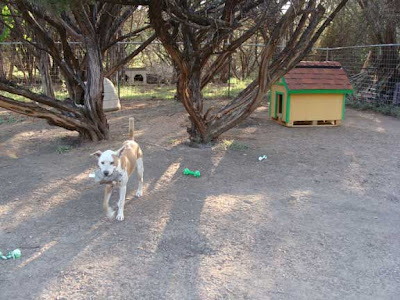 This evening, around seven o'clock—Kinky called. "Nance, Billy Joe is playing tonight in Pipe Creek. Do y'all want to go with me to see him?"

"I would love to see Billy Joe Shaver! Let me ask Tony." I asked T. and he shook his head no, because he was too tired. "Kink, we can't go. Tony is pooped and I need to blog tonight. Sorry. Please tell Billy Joe I love him. Wait, maybe Ben wants to go." I handed the phone to Ben. Kinky and Ben left the ranch at seven-thirty to go see our friend Billy Joe.

Before I go, I want to show y'all another picture that Tone took of our new Lab mix puppies. I love it! And, this morning Kinky and I passed that restaurant with the funny signs. This is their new sign! 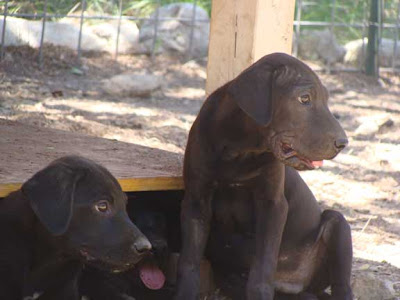 Major kudos to those sweet Girl Scouts! What a wonderful thing for them to do...the dog houses look amazing. A very heartwarming blog - so nice to read a story about people with big hearts who love animals. And as always, the pics you added were great too!

Hey Jude! Those Girl Scouts are awesome! Our gate will always be open for them! Bonnie, Brady and Rose Really Rock Big Time!