Yesterday morning, after I had happily walked six fast miles with Leslie Sansone, I was truly grateful that I never once had to shimmy, or circle the wagons, with my hands in my holster. After I had cleaned up—Kinky called to tell me that Alton and Maggie Lewis Warwick had just left Kerrville, and they were coming out to see us! I couldn't wait to meet these people!

A little before eleven o'clock, my dogs outside, started barking—Maggie and Alton had arrived! After greetings, handshakes and hugs, we immediately went into Outer Space for a short visit. Within minutes, I fell in love with these two, and I felt like they were family.

During our brief visit, I found out that Maggie enjoys reading my blog, they both love animals, and that she has been in the music business ever since she was a teenager, growing up in West Texas. She first made her name as a singer at the Louisiana Hayride in the late 1950's, then Maggie went on to a career as an award-winning songwriter in Nashville. And, Dolly Parton and Jeannie C. Riley have recorded many of her songs! To say the least, I was in awe of this woman. Then Alton tells us about their struggles to win back the Louisiana Hayride—and I was in awe of him!

But, the funny thing was, Maggie and Alton told Tony and me, that they were in awe of us and Kinky for what we do, and they were impressed and loved our rescue ranch! I guess this is where I am supposed to say, "Awe shucks." Anyway, after twenty minutes or so, they followed Buttermilk and me over to the Lodge for a visit with Kinky. Before I left the Lodge, I asked them to please come back over to the rescue ranch, after their visit with Kinky, because I wanted to give them a copy of my book, before we all went to Kerrville to have lunch with Kinky.

Forty-five minutes later, they returned to the rescue ranch! Tony couldn't stick around to visit, because he had to go pick up some hay, so the three of us continued our visit in Outer Space, while Tone went on his own Medina Hayride. At one point, I invited them to come inside the trailer, so I could later brag about adding them to my list of famous people who have been inside the Nellybelle, but they didn't know that. After they told me they loved my trailer, we went back into Outer Space.

Before they left for Kerrville, I gave them a signed copy of my book, and they gave me a CD and a cassette of some of Maggie's music.

Tone and I were supposed to meet Kinky, and them at Wolfmueller's Books, at one o'clock, and then we would go eat lunch. By twelve-thirty five, Tony had not made it back home, so I wrote him a note asking him to join us, and then Trigger and I took off for Kerrville.

When I walked inside Wolfmuellers, Mary Jo greeted me. Kinky, Maggie and Alton were already there. "Nance, you need to call Tony," Kinky said. I called Tony, and he told me that he wasn't going to be able to do lunch with us. I was really disappointed, but oh well, what the hay.

Our lunch at Francisco's was delicious and a lot of fun! I was in awe, again, as I listened to Alton, Maggie and Kinky trade stories, for over an hour and a half, about famous country music legends! Maggie had either known or been good friends with Hank Williams, Faron Young and Johnny Horton, just to name a few, and they talked about Elvis, Waylon, Willie, Cash, and their long lists of mutual friends of the Who's Who of country music. Believe it or not—I was speechless! I just sat there and ate it up, and didn't want our lunch to ever end!

After lunch, we returned to Wolfmuellers, and then we said our goodbyes. As soon as I got back to the rescue ranch, I put Maggie's CD into the Bose and cranked up the volume. OMG!—this woman can sing! Tony and I couldn't believe what we were hearing! She reminded us of Patsy Cline, Janis Joplin, and Bonnie Raitt—all rolled up into one, and on that CD, she sang country, soul, rock 'n roll and then the blues! It was fantastic! As soon as we had listened to all seventeen of her songs—we quickly added her music to our iTunes! 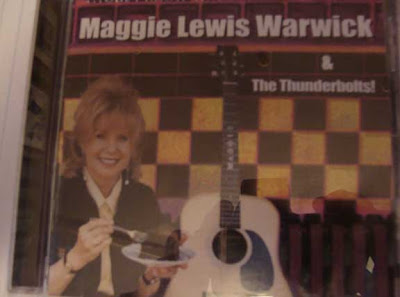 All I can say is, that I sure hope that she and Alton enjoy my book, just half as much as Tony and I have enjoyed listening to her music! And lastly, I've added going to the Lousiana Hayride to My Bucket List!

Y'all have a great evening!
Posted by cousin nancy at 9:15 PM

Nancy,
Talk about a National Treasure, I just got back to the lower 48. Just finished reading 16 days of your blog. I so look forward to reading about your work, and life, every day.

I didn't know if you would be interested in this or not, but I made this page my homepage so I could remember to go each day and donate food...free.

I know you probably can't post this, but if you aren't familiar with the site, check it out. It's a good site and they don't bug you.
Christy