I apologize for not blogging yesterday—it was a very busy day for me, to say the least! My morning started out fine. I got up early, fed my dogs and Lucky, made some organic coffee, and then I called Harley to do the Harley Show. It was a lot of fun! While I was preparing our breakfast smoothies, the phone rang. I let Carlton take it. "Nancy, Tony? This is Aaron! Please pick up..."

"Before coming to work, I picked up the three little puppies, that I found on Monday, from Hoegemeyers. I'm now on top of the mountain, and I don't know what to do. There are some puppies running around up here on 16! I'm scared they are going to get run over! Somebody must have dumped them."

"We'll take them—if you can catch them, Aaron." As soon as I hung up on Aaron, Tony walked inside the trailer. After greetings, I told him about Aaron and the puppies.

Tony smiled, "It looks like Aaron has turned into a puppy magnet." We sipped our smoothies in silence. At eight-thirty-six, Aaron arrived at our trailer—in his 'Puppy Patrol' pickup truck. Tone and I went outside to greet him, and to see the pups that he had single-handedly rescued.

"The ones I picked up from Hoegemeyer's are in the crate in the back, and the new puppies are crawling all over the inside of my truck! If they weren't licking me to death—they were pooping!" T. and I looked inside the cab window. They were cute, little Lab mixes, and there were four of them—maybe two months old, if that! Then we walked to the back of Aaron's truck, and looked at three adorable little puppies—probably two and a half months old. After checking out the seven pups—Tone and Aaron left to go put the happy little ones into puppy-safe pens. I returned to the trailer to check my calendar.

After carefully checking my calendar for cosmic events, I was disappointed to learn that we weren't under a full moon, and Mercury was not in retrograde, so I had nothing to explain our sudden puppy population phenomenon on—other than Aaron, and he can't help it. He is one super sweet, dog loving, good guy.

Starting around one o'clock, we had a string of unexpected visitors show up for rescue ranch tours. Even though we are closed to the public during the week, and it was pretty hot outside—I was a good sport and gladly gave them tours—with Tony's help.

And, the last couple who showed up, around six o'clock, didn't want a tour—they had just read my book, and they just wanted to take pictures of me standing by Yoda's graveside shrine, with the tombstone, Eternal Squirrel and the flying pig! I was honored to do it, even though I still miss my little Yoda—and always will.

So by the end of the day—I was wore out. And, that's my excuse for not blogging. I watched Gran Torino, again and loved it even more. Clint Eastwood is amazing!

This morning after walking five miles, Tony walks inside the trailer to tell me that Chuck and Ruth Buzzi—got porcupined during the night, and they were covered in quills, and he needed to take them to Hoegemeyer's immediately! After he left for Kerrville, Kinky called me, and asked me to come over to the Lodge—he needed to talk to me!

On Buttermilk's and my way out of the rescue ranch, I waved to Jim, our friendly dog walking volunteer, who was walking Martha Stewart and L.T.! Thank you, Jim!

When I arrived at the Lodge, Kinky asked me to help him edit his new book, the one that he is self-publishing—I told him that I would love to do it. Before leaving, with his manuscript in my hand, I told Kinky that Tone and I were having lunch with Sandy and Jon, before picking up de-quilled Ruthie and Chuck, and I invited him to join us.

In less than an hour Sandy, Jon, T. and I were sitting outside, at our table at Franciso's—waiting on Kinky. When the pleasant waiter came to our table, I once again asked for separate checks. "Tony and I are together, Sandy and Jon are together, and Kinky should be here any minute. The waiter smiled and took our orders.

"Should we order for Kinky?" Sandy asked. I shook my head no, and then I pulled my cell phone out of my purse, and did something that I have never done! I used my cell phone at a restaurant!

"Hi Kinky," I whispered. "We saw you pull into the bank across the street. Do you want us to order for you? We're all having the Special. Sandy said it is delicous!"

Our lunch was fun and filled with laughter! When the waiter came with our three separate checks, he handed them out, and then he carried off our empty plates. Kinky started laughing about us going Dutch, and he knew I was the one responsible for it, even though I wasn't wearing wooden shoes. As always, I was wearing my pink Justin Gypsy cowboy boots!

As the three of us were walking to our vehicles, a nice woman, walks up to Kink and says, "Hi Kinky! I'm a swallow! I wish I had my books with me for you to sign!" Kinky stops and shakes her hand, and then he tips his cowboy hat at her. I'm thinking, Kinky is a monkey, Tony is a horse and I am a rabbit in Chinese astrology—and there are no swallows! Kinky looked a little confused, and I am thinking that she is a loon. Then the sweet woman, quickly explains to us, that her name is Ima Swallow and she was visiting from Louisiana. I was relieved, as Kinky visited with her for a few minutes. Then we walked on and went our separate ways.

This evening, around six-thirty, I went over to the Lodge, to show Kinky my edits. His book was a great read, and flawless, except for a couple of typos. I can't wait for y'all to read it!

P.S. Tony walked inside, just a little while ago, with today's crop! We're talkin' radishes, onions, squash, zucchini, beans, tomatoes, and jalapenos! And, can y'all tell me what these yellow plants are, that just sprung up yesterday, in Outer Space! I have no clue as to what they are or where they came from! They're weird looking! 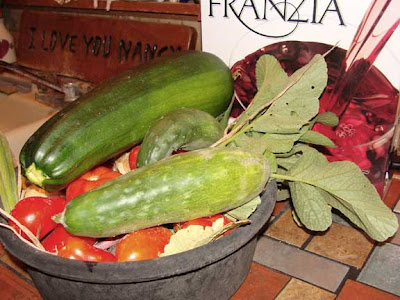 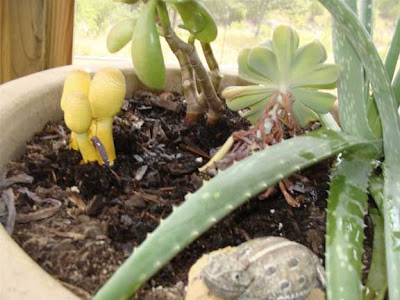 Hi Anon! That's exactly what I thought, too! Laugh out loud!