The Legend Of The Nellybelle!

Two days ago, while Jan and Todd were at Pet Supplies Plus, finding forever homes for Ellen, Oprah and Bandit, I received a phone call from Bob Wightman! Bob and his wife, Helen, are the super sweet couple, who sold me my beautiful 1983 Fleetwood trailer, back in 1995, when I moved to Utopia, Texas. And, they let me make low monthly payments to them, because I could not afford to buy it out right. I love these two people—they are the cream of the crop in Utopia, and were a Godsend to me!

I ran into Bob, three years ago at the Super S grocery store in Bandera, right after my book had come out. He and I had a long visit, and we caught up with each other's news, and then he told me about Blue's latest escapades.

Bob was one of the first people to adopt one of our dogs, back in 1998! I just looked it up in my book. On page sixteen, I listed "The Magnificent Seven," actually forty-one dogs, that we rescued during that Labor Day Weekend. Blue was the sixth dog that we rescued! In my book, it reads: "#6. Blue: Med. blue merle Aussie mix—male, approx. 3 months old."

Blue was rescued along with his two litter mates—Amigo and Candy—all beautiful puppies! I named Blue, because he had one blue eye. When we rescued forty-one dogs over that three day period—we didn't have much time to come up with names, when we were only two miles away from dropping them off at Hoegemeyer Animal Clinic to be spayed, neutered, given shots, etc. And besides—I love dogs named Blue. It is a great name—just ask Tony!

When Bob called, I was so happy to hear from him! He told me that he had had a very rough year. He had a hip replaced and his lovely wife, Helen, at the age of 79, had just passed away on June 5th, from cancer. They had been married for fifty-five years. His sad news broke my heart and I teared up. Tony and I loved Helen.

After we had talked about Helen and his loss, Bob changed the subject, and caught me up with Blue's news. I learned that Blue is doing great, slowing down a bit, because he is eleven years old, but he still goes on daily walks, down to the river, with Bob, and he now wears a seat belt when he and Bob go somewhere in his old white pickup! I loved hearing Bob's Blue's news!

A few minutes later, the phone rang—it was Bob! He told me that they were interested in meeting Rowdy, and Bob made an appointment for them to come out this morning around 9:45—they were on time!

After meeting Barbara and D..J., I gave Bob a big long hug. Bob then handed me a picture taken of Blue, last year, with this caption on the back, 'Blue 2008—On morning deer watch.' Tony and I loved Blue's picture! Isn't he beautiful! 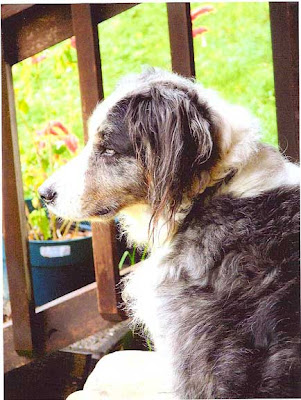 After I put Blue's picture inside Buttermilk, for safe keeping, Tony and I gave them the 'Grand Tour.' They loved the Space Ship, and going into Outer Space with T. and me! While we were visiting, I invited Bob inside the trailer, for a tour, even though it needed vacuuming! When he walked inside, he was amazed at what all Tony and I had done to it! He loved it! Then I found out that my trailer, the Nellybelle, was even more famous than it already was!

My trailer, over the past fourteen years, has been in several Kinky documentaries, a large picture of our bedroom, was on the front page of the Chicago's Tribune Lifestyle section, years ago, and just to name a few famous people like: Gary P. Nunn, Imus' MSNBC camera crew, U.S. Representative Lamar Smith, Bill Hageman, John Kelso, Little Jewford, Copper Love, Harley Belew, Billy Joe Shaver, Will Hoover, Animal Planet, Mike McGovern, Rambam, Captain Midnight, Ramblin' Jack Elliott, Sage and Dylan Ferrero, Tom Price, Kinky Friedman, Christopher Hitchens, John Mankieiwicz, Reverend Goat Carson, Steven Fromholz, PBS film crew, Larry Dierker, Kent Perkins and Ruth Buzzi—have all been inside it, and they loved it, and could not believe that it was a 1983 trailer! I love it!

Enough bragging. Bob told me Nellybelle's untold story. Bob and Helen had bought some property in Utopia. They hired a broker to find them a nice used trailer, in Houston. Bob told me that once a month, there were these trailer auctions, and on one rainy Saturday, their broker went to the auction. Because of the rain, not many buyers showed up. The trailers were parked in a half circle, like a horseshoe, and the Nellybelle was the last trailer their broker looked at. He bought it for a good price!

When the trailer was going to be delivered to Utopia—there was a problem! When it reached San Antone, on 410, the road was suddenly shut down, and their/my trailer caused traffic to stop, and pile up for hours and miles! Bob told me that he and Helen watched it on TV, as the news helicopters circled above our trailer, while the newscasters talked about it! Wow! Bob told me that they had it for over six years, before selling it to me.

After Bob's and my visit, the five us left Outer Space, and we went to show them Rowdy. As soon as Rowdy saw them coming, she turned on her charm, and started climbing up the fence, one foot at a time! When she reached two feet, she climbed back down, to get petted. Barbara and D.J. really liked Rowdy, and told us that they wanted to take a day to think about it. And, before leaving the rescue ranch, she told us that she would call us tomorrow! We've got our fingers crossed!

Y'all have a great evening!
Posted by cousin nancy at 8:00 PM

"The Magnificent Seven"... I loved that story in your book Nancy, and it is so fun to see a photo of Blue!

I love older dogs like that, they are so confident and have no troubles. With all their experience, intellect and instinct they are pretty much like people by that age, only nicer LOL!

Thanks to Bob for sharing that photo, I really enjoyed hearing about him.