For Tony and me, today was for the birds—literally—thanks to our great friends Rick and Leisa. Last week, when they were up here, they brought us a finch bird feeder, a bag of thistle, and the book, 'Kaufman Field Guide to Birds of North America.'

Late yesterday afternoon, Tony and I went to Wal Mart, so he could buy some more birdseed, and a couple of bird feeders. He also ended up buying a pole kit—to hang his new bird feeders from. When we left the store, T. was very excited about his fourteen dollar pole kit purchase, and his two new bird feeders!

As we headed home, I remembered a store. "Tone, can we check out 'Wild Birds Unlimited,' before going home? Drew and Renee told me that it was a really cool store!' In less than than three minutes, we were at the store.

OMG! When we walked inside, I loved everything that I saw, and the owners were nice and friendly, too! "Hi, I'm Cousin Nancy and this is my husband Tony. We run the Utopia Rescue Animal Rescue Ranch, with Kinky Friedman," I said. "Our friend, a lighthouse keeper, just gave us a great bird book, and we don't know much about birds—except that we like them a lot. We need your help and advice."

While Tony talked to them about birdseed, I fell in love with two things instantly—a large. pretty pink wasp catcher, and the 'Wild Birds Unlimited Advanced Pole System!' At the checkout counter, Tone purchased more birdseed and another bird feeder. Then it was my turn, I purchased the beautiful, eighteen dollar, pink wasp catcher, and their 'Advanced Pole System' which cost sixty four dollars plus tax! I didn't care about the price, because I charged it! It weighed about forty pounds, and T. had to carry it out to Buttermilk for me.

On our way home, Tony told me, that he thought that I had spent way too much money on my pole system, because his had only cost him fourteen dollars. I didn't care, because it hadn't cost me a dime—I had charged it—free right! (Suze Orman would probably freak out at this, I am sure.) Anyway, I was hooked on birding, I had caught the fever—and we're not talkin' the bird flu! The only thing that I could think about, was getting my new pole system assembled, to bring in the many beautiful birds and songbirds! Unfortunately, it was dark when we arrived back at the ranch.

This morning after chores were done, I was delighted that Tony and Aaron came up to the trailer, to put up our new pole systems! I grabbed our portable Bose iDock and my iPod, and then went outside to help, as it played one great song after another!

As they worked on assembling my pole system, Tony joked, "Aaron, this thing cost Nance sixty-four dollars! Mine only cost fourteen dollars at Wal Mart!" We all laughed, as they continued to put it together. Within five minutes, mine was planted deep into the ground, standing tall and straight—we're talking seven or eight feet high! I loved it, and get this—it was made of heavy metal, and it had a cute, cutout metal bird on the top of it! It was way too cool! I loved it—it was high quality! 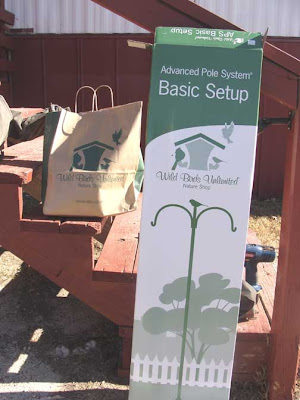 Tony and Aaron then opened up Tony's smaller pole system box! It took them less than a minute to put it together. It was only four and a half feet tall, made out of black painted aluminum, with much smaller poles. Aaron and I were trying not to laugh, but when they stood Tony's miniature pole system, next to mine—we all started laughing and couldn't quit! "You get what you pay for, T.!" I teased. "On a scale of one to ten, ten being the best—mine is an eleven, and yours is a wannabe one! How sad." Then we burst out laughing, again!

"Tony, if we sink this into the ground, like it says, man," Aaron chuckled. "It will only be about three and a half feet tall, and your little dogs will knock the feeders off." I couldn't control myself, and I burst out laughing, again, along with T. and Aaron! Then Mick Jagger started singing—'You Can't Always Get What You Want!' I came unglued, and had to go inside the trailer, to compose myself!

When I came back outside, Tone and Aaron were over by our fence, trying to tie his little pole system to our front yard fence, about three feet high, up off of the ground! I held my breath, ran back inside, and laughed as hilarious tears fell from my face!

I wanted to go outside and try to make T. feel better about his little wannabe pole system, but I couldn't, because my back was starting to ache, from so much laughing, and I didn't want to throw it out, so I watched from the window—with my dogs!

When the guys were done securing the Wal Mart Special to our fence, Tony and Aaron came up to the porch, and began filling our new bird feeders, with various birdseed— and that's when I went outside, and joined them—I was totally laughed out. Y'all have a great evening!

P.S. Please note: Trying to keep up with Lighthouse Keepers—can be extremely costly, but it is worth it—just charge it! We love you Rick and Leisa!
Posted by cousin nancy at 5:56 PM

I hope Tony gets some beautiful bird photos and share them!

Me, too, Fay! Thank you for commenting! Have a great evening!