Today has been a busy, but great day for me! In fact, I was so busy today, I still haven’t had time to answer all of my e-mails. I plan to answer them tomorrow morning, after I do the Harley Show, on The Rose— 99.9 FM.

This morning, around ten o’clock, I went over to visit with Kinky. We had a few things that needed to be discussed and then after that, we went outside, so Kinky could throw balls—for Mr. Magoo! Gooie loved it!

When I returned to the rescue ranch, I caught T. and Aaron, inside our trailer, at the kitchen table, reading my blog! Aaron could not believe that he is mentioned so often! After Aaron had caught up with my latest blog he said, “Nancy, Tony told me that people all over the world read your blog. Is that true?”

“Yes, Aaron. And, you had better be careful what you say around me,” I teased, and then we all broke out laughing. “Hey Aaron, since you are on a break right now, let’s go outside and let me show you how to rope a post.” There was silence. I went to our bedroom, picked out three of my favorite ropes, and then returned to the kitchen. “Here’s your rope, Aaron,” I said, as I handed him one of my guest ropes. “Let’s go outside.”

As we left the trailer, I handed another one of my best ropes to Tone. When we went to the front yard, over by Tony’s wannabe roping posts—that are definitely not going to be my official roping post, Tony said, as he swung his rope above his head, “Aaron, watch me.” Then he let go of his rope—and roped the post!

“Yeah Tony!” I said. “You haven’t lost your touch!” Aaron then swung his rope into the air and then he threw his first rope—he missed the post by at least three feet. “Not bad, Aaron,” I said, hoping that he wouldn’t give up. “It’s not as easy as it looks!” Then I threw my rope up into the air, made about five twirls and threw my rope—I lassoed the post! I loved it! “I did it!” I said with excitement! “The first one to rope five posts wins!” That’s when it became dangerous for me!

The three of us began throwing our ropes, faster than fast! At one point, when I had roped the stump, I was walking over to remove it from the post, when Tony’s and Aaron’s ropes nearly hit me in the head! Two minutes later, Tony won ‘The First Rope Off of 2009!’

Here is a picture of three of my favorite ropes, that I have collected over the years. The blue rope, my favorite rope, which I used today, is called a heeler rope, with the pink bandana tied to it, and I love it! The rope with the red bandana tied to it, is my second best rope—the one T. used, to win our first roping contest in 2009. And the rope laying on the porch, with our radish pots beside it, is one of my many guests ropes—that Aaron used today. 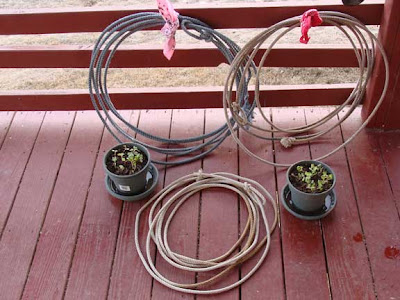 My guest ropes are good ropes, too, but not nearly as good, as my pink and red bandana tied ropes, which always hang from the headboard, on my side of our bed, along with a couple of my favorite cowboy hats, and my fringed, custom embroidered leather chaps. Tony built our beautiful cedar ranch bed for us, after we got married, back in 1999, and I love it and him so much! Y’all have a great evening!

P.S. To add to my daily three mile, inside the trailer walk, I plan to start roping, my soon to be new roping post—everyday for at least thirty minutes!
Posted by cousin nancy at 7:26 PM

Hi, Nancy and Tony-long time no see. Sounds like you guys are doing great. Stephanie, all 4 dogs, the 3 cats and I are doing well also. We've been meaning to get up there to see you guys and Kinky for at least a year! It sounds like you get plenty of company but we'd like to see ya anyway. One of these days. Keep up the good work, give Kinky our love, and God bless you. Love jimmy and Stephanie

Roping really sounds like fun...You have to let me try next time I come out! And please don't try to shorten your blog posts...I don't want to miss a word!!! 8^)

Hi Jimmy and Woody! It is great to hear from y'all! Jimmy, we would love for you and Stephanie to come out and see us—maybe y'all could play my guitar, again and give us another great concert. Tone and I would love it so much! Y'all are too talented!

Howdy Woody! I hope that your married life with Rose is the best! I'm sure it is, because y'all are both so great and deserve each other! T. and I love y'all! And yes, next time y'all come out for a visit—we're talking roping contest—California style vs. Texas style! Please tell Rose, I will let her wear one of my bandanas!

Thank y'all for your comments!