This morning, as soon as the sun came up, I put the two buckets of radishes, outside and took this picture! They had grown overnight! When Tony returned from Medina, he could not believe the size of our radishes! 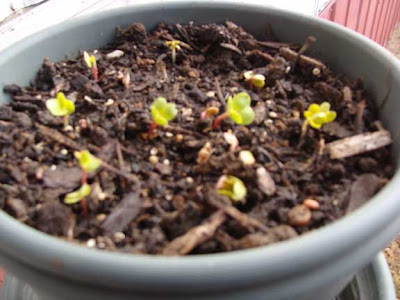 Today was spent doing end of the month, and end of the year reports. It was a beautiful day outside, eighty-degrees and clear sky, so I took my laptop into Outer Space, and worked out there, while my iPod played one favorite song after another.

Around three-thirty, Tony asked me to go with him to check on the cows—he wanted me to see Petey, a calf born on New Years Day! As we were going out the front door, Kinky called and invited us to come over. I told him that we were headed out to go check on the cows, and take pictures of Petey, and then we would drop by.

Tony and I took off in Buttermilk. When we reached the cows, Petey was nowhere to be found! His mama, Ms. Curly, was with the herd, eating hay. "Tony, do you think someone stole Petey?" I asked.

"No, Nance," Tony said, with a laugh! "Curly has him hid. I'll bet you that he's over there." Tony, Buttermilk and I then headed across the pasture, to a thick grove of trees. Tony stopped the car and got out. He walked about ten feet, and then T. told me that he had found him and to come see him!

Before getting out, I checked to make sure that Curly wasn't running towards us, to protect her newborn calf. Fortunately, she continued to eat, and just watched us. Petey is one handsome calf! Here are a couple of pictures that I took of him! 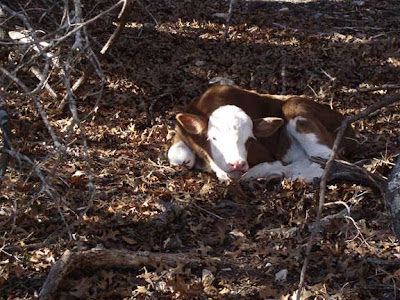 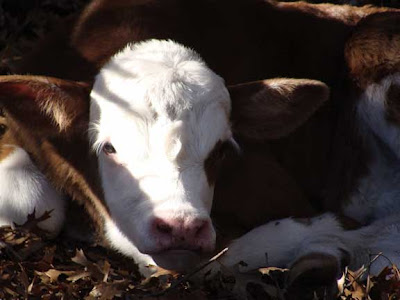 After taking pictures, we went over to see Kinky. We visited for a few minutes in the kitchen, and then Kink challenged Tony to a game of pool. They both made some impressive shots and the outcome was, The Hummingbird Man - 1, The Medina Bulldog - 0! After 'our' loss, Tony and I came back home.

Just before the sun went behind the mountain, I took this picture of the radishes! More had sprouted and they had grown bigger! Y'all have a great evening! 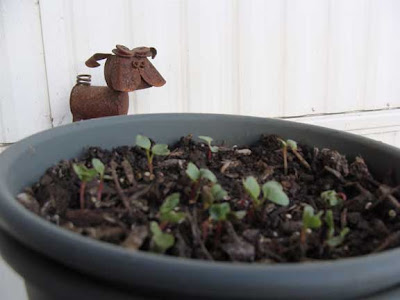 OMG! Petey is so gorgeous and cute, how sweet to be born on New Year's day. New in every way ; ))

Nancy, your radish sprouts are very impressive! Their sweet wee faces just reaching out to the sunshine are precious! I found this poem I wanted to share, it's written by Karla Kuskin in her book "Moon, Have You Met My Mother?". I think you'll enjoy it!

Write about a radish
Too many people write about the moon.

The night is black
The stars are small and high
The clock unwinds its ever-ticking tune
Hills gleam dimly
Distant nighthawks cry.
A radish rises in the waiting sky.
- Karla Kuskin

Hi Fay! I love the poem! Here's mine!

I think that I shall never see a radish sprout as big as me....Nance

I love that Nancy! You're writing Haiku without trying, very cool! The rhythm is:
5 syllables,
7 syllables,
5 syllables

Haiku rocks, you're a natural Nancy!