Something To Talk About!

Wow! Today was fantastic in so many ways! To begin with, our organic, heirloom radishes, grew about another half inch! As soon as the sun came up over the mountain, I put them outside on the porch railing.

At ten o’clock, after I had started a batch of beans, slow cooking , in my crockpot—Kinky called. He needed my help with a project, so I took off for the Lodge. When I returned to the rescue ranch, I found Aaron and Linda T., from Harker Heights, walking Dr. John and Buffalo Girl, back to the rescue ranch! Yeah! I love seeing our dogs go for walks!

After returning them to their pens, I joined Linda and Aaron. We took Lulu, Maggie, Goliath, then Aaron had some work to do, so Linda and I walked Maggie and Happy. When we returned them to their pen, there was a couple visiting with Tony, down by our trailer.

Linda and I waved to them, and then she and I took Nash and Alfie for a nice long walk—the dogs loved it! When we returned to the rescue ranch, the couple caught up with Linda and me, and the dogs. The man got out of his big SUV, “Hi, my name is Tom P., I know that one of you came from Harker Heights—just to walk dogs, today, and one of y’all are Cousin Nancy. I love y’all’s rescue ranch! I hope that y’all know—there is going to be a very special place in heaven for all of y’all.”

Linda and I introduced ourselves, then Tom’s wife, using a crutch, came around the side of their vehicle, “Hi, I’m Linda, too.” We all shook hands, and then we had a really fun visit, under the big oak tree, near our puppy pen! “We’re from Arlington, and we decided to come see the rescue ranch, and we are also big fans of Kinky Friedman, and we voted for him!”

“Arlington,” I said. “I was born and raised in Fort Worth. I love Fort Worth.”

“Me, too!” Tom said. “I grew up in Fort Worth, on the west side...” Well, that’s all it took—I love talking to people from Cowtown! Tom and I talked about Fort Worth, where we had gone to school, Carlson’s Drive Inn on Forest Park Boulevard, Camp Bowie Boulevard, T.C.U., General Dynamics, etc. It was sorta like going down memory lane, with someone you didn’t know back then, but was there when you were—it was a blast from the past for me!

As we talked, a black car drove into the ranch—it was our friend, Julia, with her friend, Karen! They drove past us, and met up with Tony, who was working, down by the pig pen. And, this is when Tom’s sweet wife, Linda, was finally able to get a word in edgewise— “I’m from Arkansas!” She was great!

Karen had told Julia a while back, about wanting to adopt a dog, and Julia told her about our rescue ranch, and asked her to please consider coming here to adopt a dog! In fact, she offered to drive her down here, and she did!

As Tom, Linda, Linda and I visited under the tall oak, I saw Tony take Julia and Karen for a tour, to see if we had a forever dog—for Karen. I had my fingers crossed.

After explaining who Tony was giving a tour to, I said, “Y’all ought to stay around to meet Kinky. He should be back at the ranch within an hour.”

“We’d love to, but we are headed to Medina for lunch, and then we’re going to Lost Maples. Maybe the next time, we can meet him,” Tom said. After shaking hands, Tom and Linda drove away, Linda and I took Maggie and Happy back to their pen. Then Linda and I went and found Karen, Julia and Tony over by Pearl and Laz’s pen.

After greetings and introductions, we finished up the tour with them. “I want to adopt Goliath!” Karen told us. “He’s the one.” All of us were thrilled with her decision!

Karen and Julia told us that they were going to go over for a short visit with Kinky, and would be back soon to sign the adoption form and take Goliath to his new home. After they drove away, Tony said, “Nance, I’m starving. Are those beans ready, yet?”

“Yes, but I still have to make some cornbread.”

“Let’s go to the trailer. I’ll just eat a bowl of beans for now—I’m starving.”

When we reached our front yard gate, Linda grabbed her lunch sack out of her car, and we came inside. While Tony lapped up his beans, and Linda ate her lunch, I made some organic cornbread, and put it into the oven, as we three visited.

After they had eaten their lunch, Linda told me that she was ready to walk some more dogs. I was tired, and my back was aching a little, because I had almost tipped over (fallen from a big loose rock, that I was standing on in one of the dog pens), so I declined to join her. She understood, and took off to go walk Blackie and Kahoula.

When the cornbread was ready, Tony and I ate lunch together. Just after I had put our dishes into the sink, to wash, the dogs cranked up outside! “Nance, someone is driving in, I think it is Tom and Linda!”

“Great! I really like those people.” I then picked up the phone and quickly punched in Kinky’s phone number, and then went out onto the front porch, and waved to them, as they pulled up. “Kinky, this is Nance, would it be okay for me to bring some really nice people, over there to meet you? They voted for you, and are big fans of yours and I love them!”

Two minutes later, Linda, Tom, Kermit and me were headed over to Kinky’s. Linda T., who had just returned Blackie to his pen, jumped into the back of Kermit, and we went over the river and through the woods.

Talk about a fun time! There was so much laughing—my back really started aching from laughing so much! Everyone seemed to really have a great time, and before we left, there was plenty of picture taking. Unfortunately, I had forgotten to take my camera, and was disappointed about not having it, so I could show you.

When we left Kinky’s, Linda stood up in the back of Kermit, the whole way back to the rescue ranch, as the four of us laughed more, with Karen and Julia following us!

Before signing Goliath’s adoption papers, I ran inside, I mean, skipped inside the trailer, and grabbed my camera. I asked everyone to pose and I shot them! Then Linda asked me to take a picture with her camera, and then Tom and Linda asked me to take a picture of them with their camera! From left to right here are our friends: Tom, Karen, Tony, Linda T., Linda, and Julia! 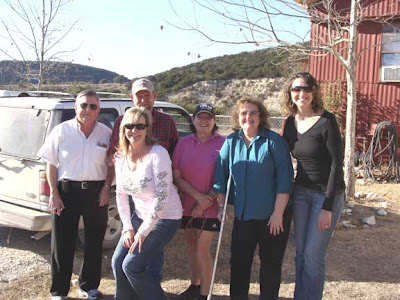 While Karen filled out the adoption form, my new friends, Linda and Tom from Arlington, Texas thanked us for the fun time, said their goodbyes, and drove away, followed by Linda T.

When we reached Goliath’s pen—he already knew that he was getting adopted! His tail was wagging faster than fast, as Tony slipped a leash on Goliath! Here’s a picture of Karen with her new found best friend! I hope that y’all had as great a day, as I have! Y’all have a great evening! 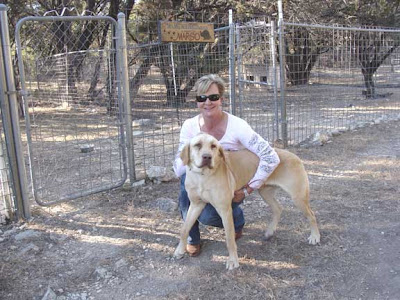 OMG! That is incredibly wonderful ; )) I don't know who's smiling more: Goliath or Karen! They look perfect together! I knew he wouldn't be long at the Ranch. What a fantastic start to your new year! And Goliath's. Awesomecool!