Well, I am happy to report, that today has been another great day for me! I rolled out of bed a little before six o’clock. I put the dogs outside, and then I went directly to my laptop computer and went online, so I could watch and listen to my good friend, Harley Belew, do The Harley Show! Harley is Kerrville’s favorite DJ, and everyone listens to his show. And now, because his show is a live web cast—I’ve become addicted to watching it!

While listening to Harley’s entertaining show, I fed our dogs and Lucky, I made some coffee, and then I realized that I was constantly turning around to look at Harley—to see what he was doing, who was in his studio, etc.

While Harley was talking about Randy and Lisa’s Save Inn Restaurant, I went to our web site: utopiarescue.com, to see who was going to be Harley’s Pet of the Week—it was Sam, the sweet black Lab mix, who was just returned to us! Then I went back to The Harley Show, and he was talking about our good friends, Trisha and Rodney’s—CopiesPlus!

At seven-forty-two, I did what I always do every Thursday morning. I stopped the washing machine from washing, I turned off the stove top, that was cooking up some sizzling chopped organic onions and potatoes, in my cast-iron skillet, and then I cut off our noisy central heating system. Why? Because I am hard of hearing, and didn’t want any extra background noises making it difficult to hear Harley. I then muted Harley’s Show, and punched in the station’s phone number.

The show was fun, and Harley made me laugh a lot, but when he suggested that they put up a picture of me, on their web cast, while I do his show, I burst out laughing! “Harley, you’ve got to be kidding me?” Then he flipped open our Utopia 2009 calendar, and put my picture up to the camera! Thank goodness, the picture was small!

“No, I’m not kidding, Cousin Nancy. In fact, I bet we could get Trisha, over at CopiesPlus, to do a life-sized cardboard cutout of you.” Then we both cracked up laughing!

“I’m sure Trish could do that, but we’re talkin’ using a wide-angled camera! Good grief, it would be gigantic! That’s all I need.”

“Not a problem,” Harley laughed. “They’re made out of cardboard, and we or you, could whittle it down, you know shave off a few extra pounds, here and there...”

After saying goodbye to Harley, I turned the volume back up on Harley’s live web cast show, started the washing machine—washing again, turned on the burner, on the stovetop, and cranked up the heat—I had noise.

Ten minutes, before Tony showed up, I had three different phone calls, from friends, who had listened to the show—encouraging me to do a life-sized cutout picture of me! “No way,” was my answer to all three, “And besides, I know for a fact, that cameras add ten pounds on you.”

When Tone walked inside the trailer, he was laughing. “Nance, the show was really great! I think that you ought to do a life-sized picture of you.”

“That was hilarious, when Harley said, that maybe they could find someone who knows how to do a ‘Clutch Cargo,’ on your mouth!” Then Tony started laughing, again!

During breakfast, T. and I sat at the kitchen table—watching and listening to Harley. Tone is addicted to Harley’s web cast, too.

After breakfast, I cleaned up the dishes—then I started doing my three mile brisk walk, with Leslie Sansone. With my two pound, lavender weights in hand, and marching faster than fast—Aaron came inside the trailer. He and Tony started watching Leslie, and started making funny remarks about my walking guru’s workout—which were pretty funny! They left the trailer, when I was at my two and a half mile mark—thank goodness.

At 9:28, my good friend, Fay called, while I was putting on my new Justin Gypsy cowgirl boots, because I was going horseback riding at noon, but needed to leave at ten-thirty. Fortunately, I was able to get them on, and I picked up the phone, just before she hung up! Fay told me that she had missed Harley and me, because she thought Toronto was two hours ahead of Texas time. She told me that while watching Harley’s live web cast show, she sent him an e-mail, telling him that she was watching from Toronto, and asked if she had missed the Cousin Nancy segment. “Nance, I then watch Harley write something on a piece of paper, and then he holds it up to the web camera! It had a big smiley face drawn on it, that read: 'Watching in Toronto!' Nancy, I love The Harley Show!”

As always, I enjoyed talking to Fay. (Fay, if you could, would you please make another comment on my blog, telling everyone about your Harley Show expereience—I’m running out of time and space here! And, thank you for calling me this morning!)

At ten-thirty, Buttermilk and I left for Bandera, to meet Cindy P., so we could go horseback riding! At noon, Jeanne, Cindy and I rode off into the ‘no-set!’ The weather was absolutely perfect—63 degrees, no wind, and sunshine! Jeanne rode her big sorrel horse, Diego, Cindy rode the brown and white pinto, Davy Crockett, and I rode Black Jack Cadillac! We had a blast riding for two hours! And Tone, surprised me, and showed up at one-thirty, to shoot us as we rode in! Here are his photos, that he took of us! And, the last picture is of the new rooster, that Tony rescued today, while I was out pretending to be a cowgirl or should I say—cow-woman. The handsome rooster’s name is Churchill! I can't wait for Kinky to meet Churchill! Y’all have a great evening! 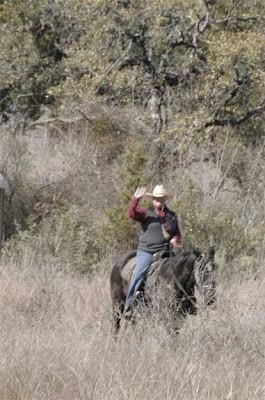 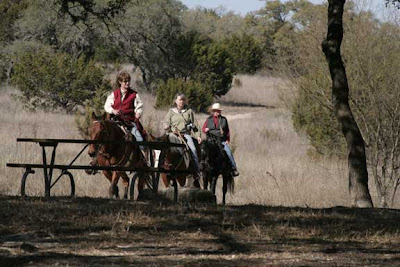 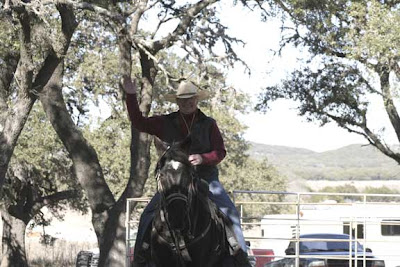 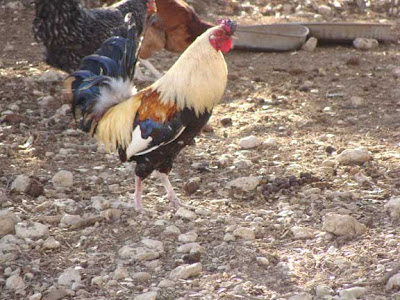 Hi Nance, Looks like you had a great ride with your pals, love the sunshine. I'd be happy to share (for those that weren't watching after you were off the air LOL)...

I tuned in to the webcast thinking it was 7:45am in TX and was watching on my laptop for about 10 mins. You weren't on so I sent Harley this email:
"Good morning Harley,
I'm listening from Toronto, Ontario, Canada. I LOVE the streaming video, very cool.
To your radio listeners: you won't believe what he does in that studio ; ))
Has Cousin Nancy been on yet? I think you're 2 hours behind us, not sure. Did I miss her?
She shared this link on her awesome blog, and here I am.
God bless Utopia Animal Rescue Ranch and Texas!
Fay xo"
Another 10 minutes went by and I see him writing on a piece of paper and next thing I know he holds it up really close to the webcam: It was the one with the smiley face you mentioned earlier. I bust out laughing, it was so funny! He takes the paper away and turns it over, wrote something else and held it up again, really close to the webcam. It said "Cousin Nancy is GONE". It was so cute and funny.
Shortly after that I phoned you and left a that huge long message on your answering machine which gave you 10 minutes to pick up LOL!! It was great to talk to you too Nance, I gave Kris a big hug & kiss for you.
Here's the link again to tune in on Thursday mornings, it's really fun to watch!
http://www.roseradio999.com/ and you just click on "The Harley Show -Live Video Broadcast".
Send him an email too, he just might have chalk and a chalkboard on hand next week! LOL!!

Hi Fay! Thank you so much for sharing! I loved our visit this morning! And, thank you for watching The Harley Show!