Queen For A Day!

Today has been great, but I am writing my post early and scheduling it for tonight, because of some possible upcoming thunderstorms later on tonight.

Last night around 7:00, Deanna called to tell me that she and her sister wanted to come out, if it wasn't too late for a visit. "I would love for y'all to come out. I've already written a post for my blog tonight, cleaned and dusted our thirty-year- old trailer and I've just put our new bedspread on the bed, for the very first time!"

I didn't tell Deanna that when I put our new quilt on our bed there was a big problem. The quilt was not the size that I had ordered. I had ordered a Queen size for our bed and the bag said it was a Queen size too, but when I pulled it out of its zippered bag, it was a King size quilt.

When I first put King on our bed, both sides of the quilt touched the floor. So, I pulled the visible side of the quilt to the correct height and I had about a foot of extra quilt lying on the floor, on the opposite side, next to the window, that hopefully they would not see. Then I rolled up some of the extra length and hid it under the pillows and it looked great and that's when I took that picture of it. And it really didn't matter, because within a year, I am sure that Tony's dog Beau will have reduced the size of King down to a Queen size, with rough scallops and holes in it.

After adios-ing Deanna, I gave Abbie her evening pills. Then I went outside and jumped into Kermit and took off, to go open our front gate for them. Once I was back inside The Cabin, I realized that I had forgotten to put up the chickens. So I went outside again and skipped all of the way over to the pigpen and put The Golden Girls back into The Egg Palace.

A few minutes later, I went outside to greet Deanna, her sister Danielle and Hank, Danielle's adorable mutt, which she had adopted from a shelter. "I love Hank," I said. "He is too cute." We then went into The Okay Corral and closed the gate behind us. While Hank was busy checking out the yard, I gave Deanna and Danielle a tour of my writing cabin. And not to brag, "They loved it, too."

When we came back outside to check on Hank, Deanna said, "We are dying to see your trailer."

"Okay, let's go into Outer Space first, so y'all can check out the view." One minute later, we were sitting in Outer Space getting to know each other and laughing, as we traded stories. And I will admit that I talked too much. And they can vouch for it.

Before we came inside The Cabin, Danielle took off to her car, to fetch a bottle of white wine, for Happy Hour, which actually should have been called, Hilarious Hour. When we walked inside The Cabin, Roy, Mama and Belle greeted my newest friends. Then I gave them a tour of The Cabin and yes, they loved it, too and Deanna told me that she wants to bring her husband over, so he can see it, too.

After the tour was given, I was so thankful that they had not seen the rest of King, lying on the floor, near the window. We settled in the kitchen for a fun visit. As they sipped their white wine, which came out of a bottle, and I drank my fine, boxed, red wine we got to know each other. When I told them about Carol being my best friend and wanting them to meet her, we decided that in the near future, we're going to do lunch, in Kerrville, so they can meet her and Tony, too.

During our Hilarious Hour, Deanna bought copies of my Cowgirl Sisterhood: Part I and Part II  novellas and I gladly signed them to her and Danielle. "Y'all please note that these are fiction and Carol, in real life, is not the zany, fictional character, that I have made her out to be, in my novellas and..."

The party ended around 8:45. I had a total blast visiting with Deanna and Danielle and I was sad to adios them and watch them leave, because their visit was so enjoyable. And I was deeply sadened, when I had to go remove King, the beautiful, Queen for a day quilt, from our bed and replace it with Queen, that was once beautiful and had aged from Beau's wear and tear.

To prove how a stupid thing, like a quilt, can make me so sad, I took these pictures of King, last night, pretending to be a Queen and then the old, ragged Queen, that now sadly graces our bed once again, thanks to Beau. I hope these pictures don't depress you, too. Also, please note that I cropped the first picture, at the bottom, so you can't see the rest of the quilt lying on the floor. 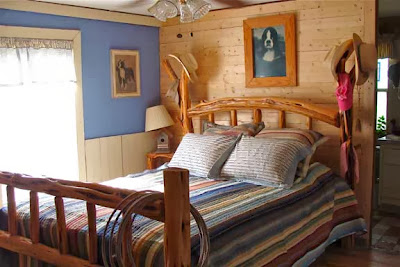 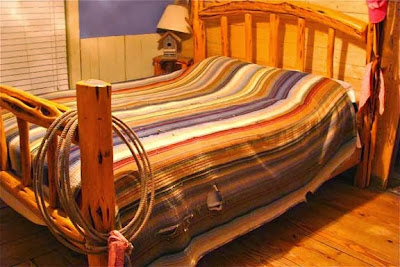 Carol called me this morning and she could not wait to hear about Deanna and Danielle's visit and we laughed and laughed. She is so looking forward to meeting them, as much as they are about meeting her and Tony. And that is about it for today. I hope that we get a lot of rain, without thunderstorms, tonight.

Y'all have a great evening!
Posted by cousin nancy at 7:18 PM