Today has been great, even though last night, thanks to Roy, I could not remove the grease from the kitchen floor no matter how much I steamed cleaned it. This morning when Tony and Brandon returned from The Old Timer, in Medina, I complained to Tony about how disappointed I was not being able to remove the grease stains last night. "The stains will eventually go away in time, just like the flour that was stuck on the floor."

"You had flour stuck on your floor?" Brandon asked.

"Yes," I said. "In 2007, Abbie went nuts one night, after we had gone to bed. She flung an entire sack of flour all over the big room and the kitchen, and Tony tried to remove the flour with a wet mop, while I was still sleeping. We had flour stuck all over our kitchen floor. Actually, it was pretty funny and I even wrote about it. In fact, my Flour Power, story was my very first story that I wrote for my blog." Then I looked Flour Power up, in my archives, on the side bar and I was shocked to see that it had happened, on September 28, 2007—just three days shy of being six years ago, when Abbie made our trailer look like it had snowed inside, with snow drifts here and there.

"The grease stains don't look that bad," Brandon said, trying to cheer me up. "They'll go away some day."

Today has been a very busy day for me, with some very exciting, good news about my novellas, but I can't divulge that information, yet. Around 4:30, I decided that my work for today was officially over. So, I decided to make up a funny sign about Roy's grease stains and then take a picture of Roy wearing the sign.

When I tried to tie the sign around Roy's gigantic neck, he balked and pulled the string out. So I asked him to please get up on our bed, which he was happy to do, because I guess he thought it was "nap time" for us. He circled on the bed and then he laid down. I then pushed the sign close to him, to make it look like he was wearing it. Then I took his guilty-looking picture.

Because it is hard for me to read the sign in the photo, his grease guilt sign reads:

BECAUSE I RAIDED THE TRASH CAN
AND
GOT GREASE ON
THE WOODEN
KITCHEN FLOOR,
THAT NANCY CAN'T REMOVE.
I AM GROUNDED AND HAVE TO WEAR THIS
STUPID SIGN ALL DAY LONG.
BUT IT WAS WORTH IT, BECAUSE
I LOVE HER FAJITAS, TOO! - ROY 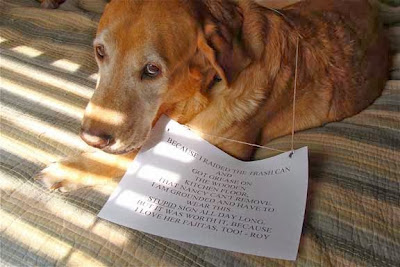