Today has been so much fun even though Mercury in retrograde wreaked a little havoc right before sunset.  This morning I got up real early so I could do my morning chores, walk with Leslie and get the trailer cleaned up, because my good friend, Joni Daniel, the Publisher of "Texas Animal Imprints" magazine, the one that I write a bi-monthly column for, was coming out to visit us around one-ish and I couldn't wait to see her!

Around eleven-thirty, while I was cooking our lunch the phone rang—it was Jon Wolfmueller. After we said our howdys to each other he started laughing and said, "Have you gotten your mail today?"

"We just got our mail and I wanted to tell you that we got the new Club Ed's 2011 Spring catalog of classes and you're in it!"

"What? Are you serious?" I asked, with excitement.

"Yes. When I picked up the catalog to look at it, I opened it up on page 55 and there was a picture of you and a short article about "Cousin Nancy Loves Club Ed" and I nearly fell out of my chair. It's a good picture of you and a great write-up by Phil Houseal—you're famous, Nancy..." Jon and I talked a few minutes more about how excited I was being featured in Club Ed's catalog and what a nice man Phil Houseal was, and before we hung up I thanked Jon for letting me know.

Then I went back to cooking and then the phone started ringing off of the wall—with friends and well wishers telling me that I was in the 2011 Club Ed catalog! To say the least, I was more than thrilled. Thank you, Phil—you made my day today and I am so honored that you included me in the catalog!

After lunch I walked two more miles with Leslie, to complete my total of eight miles walked today and then I cleaned up. An hour or so later Joni showed up in her cute, baby-blue colored VW Bug convertible, with her sister Julie!

As we drank coffee and nibbled on Ellen Jackson's delicious holiday cookies, inside the trailer, we caught up with each other's news and then we started talking about the magazine and the upcoming "Texas Animal Imprints" January/ February issue. And by the time that conversation ended—it looks like T. will have one of his beautiful pictures appear on the cover of "Texas Animal Imprints" magazine! I don't know who was more excited about it, but I think Tony was. I am so proud and happy for him. "Tony!" I said. "You're a professional photographer and can now brag that your pictures have appeared in magazine articles and on magazine covers, calendars and books, too. I love it!" T. blushed and said nothing, but I could tell that he was more than happy about it.

We had the best visit with Joni and Julie, even though it was too short, but there was so much laughing I had to take an Aspirin. After we went outside and visited with all of our rescued dogs—they told us that they had to leave and we hated to see them go.

After Julie and Joni left the rescue ranch, Tone printed out and showed me two pictures to get my opinion on them and I absolutely loved them—they grabbed me! And, when we went over to the Lodge to give Joni's gift to Kinky, we took the pictures with us for Kinky and Marcie to see and they thought they were beautiful, too! And here they are. The second one is of Little Jewford and Shalom on the ranch and I think these pictures look like paintings. 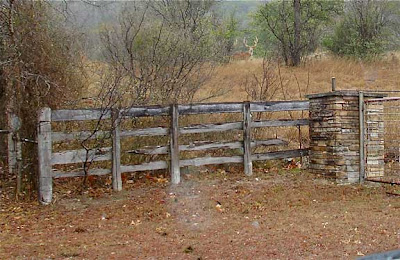 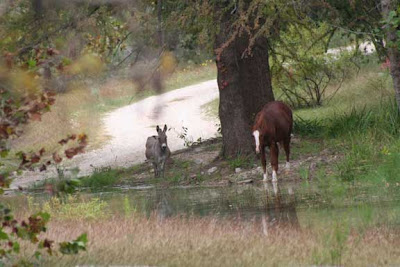 Y'all have a great evening!
Posted by cousin nancy at 8:02 PM

Ok,I don't just LIKE, but LOVE Tony's two pictures, BUT!
I'm hanging my head here. It took me until TODAY - actually TONIGHT - to notice the axis buck in the first one. WOW!

It's a great enough photo without that buck, but that 'surprise' addition makes this a really fun and beautiful type of 'camo art'.

i know the word everyone said on viewing tony's photos...WOW, adding ....extremely beautiful

Happy New Year, Mari and Anon! I love those two pictures, too and am going to have posters made of them at Copies Plus and hang them in the big room!

P.S. The buck surprised me, too!

If Tony will sell me a copy, I'm "in" for the one of the axis buck and fencing. That misty, dreamlike quality sets a great 'mood' for the surprise of the buck in that photo!

I would buy it in any regular frameable size, but I have to think that a poster might make it too easy for anyone to spot that buck, which would 'ruin' the 'surprise' element!

The more I look at the picture, the more I LOVE it!

But, if I have to settle for a postcard when it's printed, that's ok too. Just let me know when Jon & Sandy start selling them so I can get there before they sell out!