Even though today was the shortest day of the year, I accomplished much, but I didn't get to walk today, because we had unexpected visitors show up wanting to meet us and visit and take tours, which was fun, but it messed up our plans for our day. And now I am starting to get really concerned about not reaching my goal of walking 1,825 miles before the New Year, because of all of the holiday seasonal traffic.

This morning after breakfast, Tone and I went over to the Lodge to have a short visit with Kinky, before we officially started our day. While we were drinking coffee with him, he said, "I watched some of the eclipse of the moon last night..." When I asked him if the moon was coppery red—he said, "No, because it was real foggy outside and..."

After a fun visit and drinking a cup of coffee with Kinky we came home, which was good, because thirty minutes later we were surprised when three different groups of people showed up, within twenty minutes of each other, without prior notice—because they didn't know that we are only open to the Public on Saturdays or by appointment only during the week.

It was fine. They were all really nice people and I enjoyed visiting with all of them. They told me that they came out, because they just wanted to meet us and visit and take tours, so I entertained them in Outer Space and gave them tours, while T. fed the dogs and cleaned the dog's pens. By noon the visitors were gone and I was feeling a little pooped.

So, after lunch, I spent an hour catching up with the newest paperwork and then, while Tony went to Medina to mail out several more letters for me—I finally went to work on my "Bookshelf Project," for my office, which I can proudly brag was, "Made In America—Medina, Texas—to be exact!" And, it only took me about an hour to build, and of course, it is not perfect, because "It' A Nancy." Here are some pictures that I took of the ten boards of cedar before I cut them up on the front porch, which I only had to use six and a half of, my finished bookshelf, the bookshelf doing it's job in my office inside the trailer and the other picture is of my office. Please note that my handmade, cedar wood bookshelf only cost me ten dollars to build and I am thrilled with it! 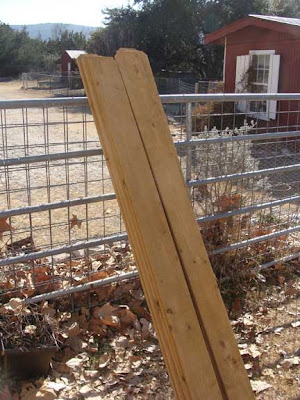 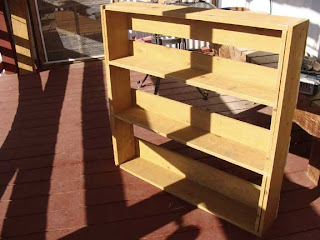 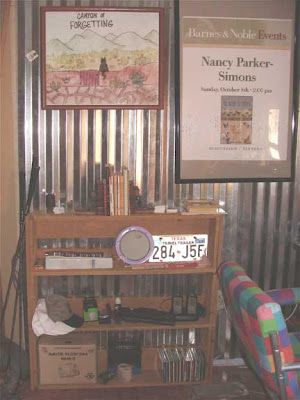 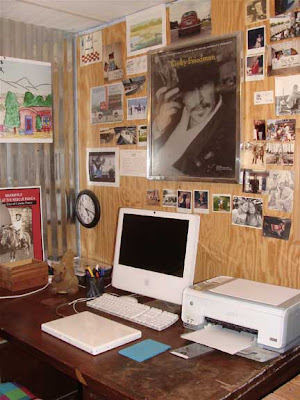 Please note: That beautiful old desk, that I truly cherish, that the computer is sitting on, which is oddly, exactly like the old desk in Kinky's office, belonged to my sweet grandfather, then given to my dad and then passed down to Ronnie—that Ron gave to me over twenty-some-odd-years ago, and I can guarantee you that it was Made in America, too, because it is still solid as a rock and was made with American pride.
This evening while we were over at the Lodge, visiting with Kinky, The Friedmans and Frank—FedEx showed up with a delivery for Kinky. A good friend of his had sent him some presents and a big canister of delicious looking Chocolate Peppermint Bark cookies. As the men nibbled on the delicious cookies, I looked under the pretty, decorated canister and said, "Guess where these cookies were made?" After they had swallowed some bark, I said, "Made In Mexico. Can you believe that?"
It is now way past my bedtime and I need to hit the hay—so to speak.
Y'all have a great evening!
Posted by cousin nancy at 9:43 PM

I blew up the wall next to your desk by clicking on 200% on my browser. My next reaction was "aw shucks", our Holiday Card was not on your wall. I'm trying to be a brave little soldier about it.
Happy Holidays, and as Kinky says, may the god of your choice bless you.
'Erb and Karen