And Then Came Maude!

Sunday afternoon a little before two o'clock, Tony dropped me off at The Yoga Space, so I could drum to my hearts content in their Drumming Circle, while he went and ran some errands and took pictures. When I walked into The Yoga Space, the vibes were great, just like the time before, and I was greeted by the friendly staff and people who could not wait to start pounding on the drums.

After removing my pink boots in the entry way, I quickly found my favorite drum and as I was sitting down in a chair I heard a familiar voice say, "This is my first time to here and I can tell by the pink boots on the floor, that Cousin Nancy is already here."

Jeffrey Rector, our talented drumming circle facilitator, who is a lifetime musician, with really good vibes and who has in the past facilitated hundreds of drum circles over the past four years, had us smiling and grinning as we beat our drums to a different beat. And within a matter of minutes he had our drumming circle of strangers, become one and in sync with all of the thirteen drummers present. It was absolutely incredible how he did it and it was a total blast for me! To say the least, "We sounded good!"

An hour and a half later, when the drumming circle ended, Eileen told me that she really enjoyed it and then Jeffrey asked me, "Why didn't Tony come today?"

Being caught off guard, I smiled at him and said, "Well, Tone is a Country Boy, if you know what I mean? He grew up in Medina and he only listens to country music. He beats to a different drummer, so to speak. He enjoyed your last class, but he only came to it because it was my birthday." Jeffrey understood and we laughed. "By the way, since you teach music at the elementary school, over in Comfort—do you know Dylan? He's a good friend of mine and Kinky's and he teaches in Comfort. I love him and Sage."

The young, red-headed instructor grinned. "Yes, I know Dylan Ferrero. I was going to ask you if you knew him. He is a great guy..." After a fun visit I went outside to find Tony, but he was nowhere to be found, so I called him on my cell phone.

"Tony, where are you? The class just ended and was so much fun. I'm cold."

"I'm sorry, Babe. I just lost track of time. I'm in the park taking pictures and I will be there in four minutes. Bye." Five minutes later Tony picked me up on the corner of Earl Garrett and Main, and then we went to H-E-B to get groceries and then we came home.

This morning, the only thing that I could think about while I walked eight more miles with Leslie Sansone and her crew, was whether or not to get rid of my Direct TV receiver and never watch TV again. An hour and thirty-six minutes later I had finally made up my mind—I'm keeping it, because of "Men Of A Certain Age." I love that show so much, that airs on TNT tonight with their new season premier, at nine o'clock and I wouldn't miss it for the world.

Late this afternoon T. and I went over to the Lodge to visit with Kinky, because he has been out of town for several days and we needed to catch up with each others news. While Tone was outside talking to Frank, while he fixed his car, Kinky and I talked in the kitchen about Zeus and Mabel.

After we discussed Zeus, we talked about Mabel, the sweet, little, black, ten to twelve year old dog, that came with Buddy, the goat. "I love Maude—I mean, Mabel," I said. "I'm sorry I can't quit calling her Maude for some reason..." After Kinky and I talked about her and a few business matters Tony and I climbed into Buttermilk and headed home.

"Tone, I want to bring Maude, I mean Mabel into our house. She is old and alone and I'm sure that she will get along fine with our other old dogs, Hank, Toto, Little Girl and Thunder. What's one more? Mama and Abbie will never know she's here, since we keep them separate from the old ones. And, I am going to change her name to Maude. For some reason I keep calling her Maude not Mabel and..."

When we drove up to Mabel, in the puppy pen, Buttermilk stopped and T. got out and went into her pen and picked her up. Then I opened the car door and he put her into my arms. "Mabel, we want you to live with us, okay?" I said, as I petted her and as Tone closed the gate to the puppy pen. "But, I am going to rename you and call you Maude, if that is okay with you, because you look like a Maude to me and..."

After we put Maude in our front yard, T. let out our four Golden Oldies outside to meet her and it was a very friendly meeting. Ten minutes later, our old dogs walked up the ramp to our trailer to come inside and then came Maude Parker-Simons right behind them, with her stub-of-a-tail wagging. "We've got a new dog, Tone! Welcome home, Maude. We love you and..." 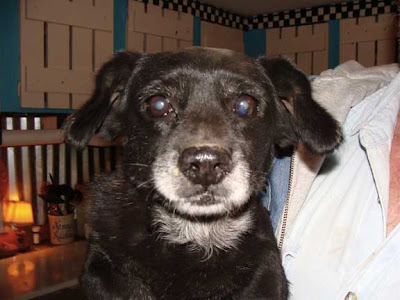 When we came inside, Carlton was flashing, so I pushed the play button. "Tony and Nancy, this is Carol. I just wanted to let you know that I just finished reading Canyons To Remember and I loved it! Thank you, for loaning the book to me...Can James and I come over tomorrow for a visit?" I picked up the phone and punched in Carol and James' phone number and it looks like our good friends are coming over tomorrow afternoon for a fun visit and I can't wait to see them.

I've got to go watch Men Of A Certain Age!

Y'all have a great evening!
Posted by cousin nancy at 8:47 PM

Nancy, don't you get rid of that DirectV receiver! Did you know that RFD-TV is airing Roy Rogers' Happy Trails Theatre on Saturdays? You gotta watch THAT! Chl 345.

Hi Mari! I didn't know that. Thanks for letting me know. I will definitely watch it. See you, Sunday!

What a sweet story, and Maude is a lucky girl ;)) We finished decorating the tree last night, with Kris Kristofferson looking on in disgust. Seriously! Every year he has watched me decorate the tree he just lays there giving me the sideways glance with the whites of his eyes and looking down his long nose. If he could talk, I'm quite sure he'd say, in his Texan drawl..." If you can't eat it or chase it, why the he## are you hanging stuff off it?! He's so comical, love that dog!! xo

Gotta comment on Maude's ears - she is EXTRA adorable because those ears look like little girl pigtails!

You do KNOW that "I", as a senior person, have a "soft spot" for all the senior dogs!