Today has been great. This morning while Tony and I ate breakfast, he told me something that he had just read on the Internet and it was so bizarre sounding—I couldn't believe it. "I just found out that you will never have to buy dryer sheets again, because aluminum foil works just as good and it leaves a smaller carbon footprint," Tony said, as I nearly choked on my smoothie.

After Tony repeated what he had just said, he says,"Nance, I know it sounds really weird, but I think that you should give it a try. It said to pull out about six to eight inches of foil, make it into a ball about the size of a golf ball and then just throw it into the dryer. But, the next time you use it for another load, pull off a strip of foil about an inch or two inches and wrap it around the foil ball. One woman wrote a comment about it and said, "The bigger the ball gets—the fluffier the clothes get."" We started laughing.

After T. went outside to do his chores, I made an aluminum foil ball about the size of a ping-pong ball and tossed it into Airy Queen to dry a load of laundry, while I walked four miles with Leslie. During the forty-eight minute walking-workout I could not stop thinking about the aluminum ball—hoping that it would work, because I would love to quit using laundry sheets, save a little money and leave a smaller carbon footprint.

As soon as Leslie's video ended I race-walked to the dryer and opened the door and pulled out some clothes to see if they had any static electricity—and they didn't have any static electricity! We're talkin' NONE! I was shocked, to say the least. I got so excited about my little silver ball, I decided to wash another load of laundry while I walked another four miles with Leslie Sansone.

As soon as I was done walking, I pulled off a two inch strip of Reynold's "Made In U.S.A." Aluminum Foil and wrapped it around the magical ball and then I tossed it and another load of wet laundry into Airy Queen and started the dryer to test it again. Then I decided to wash our bedding, so I put our sheets and a blanket into Queen Bee and started the washer and then I quickly folded and put up our first load of cleaned, static-free laundry.

Because I was so thrilled about it working I couldn't wait to tell Tony, who was still outside working, or someone about it and then the phone rang—it was Ronnie. After he wished me a merry Christmas I excitedly told him all about the little silver ball. "Ron, it is so unreal! For me, it's the Little 2010 Medina Miracle and it has made my year!" My brother started laughing, which caused me to start laughing.

"How sad, Nance," he teased. "I'll tell Nita about it and get her to give it a whirl in the dryer." Then we started laughing, again and had a fun visit.

Tony was the next to hear about the miracle ball that he told me about and then I called my sister Cindy to tell her about the powerful little aluminum ball. After I had enthusiastically encouraged her to give it a try she says, "Sorry, Nance, we don't use laundry sheets, but I think it is great that you are so happy and..."

Kinky was the next to find out about this magic silver ball, when we met him for lunch in Kerrville and I must say—he didn't seem real impressed with my exciting news and unenthusiastically said, "That's great, Nance. Tony, would you please pass me the tortillas and some..." And that made Tone and I laugh. After lunch we drove off in different directions to run our errands.

Our last stop was at Albertsons to grab a few last minute groceries. When Tony parked Buttermilk and turned her off, he started laughing and rolled down her window. "Hi, Charlie!" T. said, as I looked over and saw our good friend and neighbor Charlie Cooper, sitting in his car, right next to us, with his and Ellen's three cute, little dogs.

After greetings, Charlie held up their little Min Pin pup and introduced us to her. "We named her Poco," Charlie said, and then Tone and him started talking about trucks. When Ellen walked up, I jumped out of Buttermilk to go greet her and to tell her about my latest discovery.

After I had told her everything there was to tell about my aluminum foil ball, Ellen smiled and said, "We use liquid fabric softener, but that's good to know..."

When we got home I washed the rest of our blankets, then foiled the ball, again, tossed it into the dryer with the blankets and dried them. And I must say—there was no static cling, once again.

After I remade our bed I took these before-and-after pictures of my miraculous, little, silver aluminum ball, which by now, has grown to the size of an extra-large egg. And, I have affectionately named my new little helper, "Knock-Knock," and it is not a joke, because he makes these cute, little thumping sounds as he bounces around inside Airy Queen. 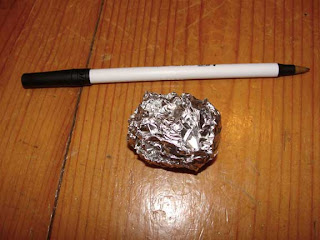 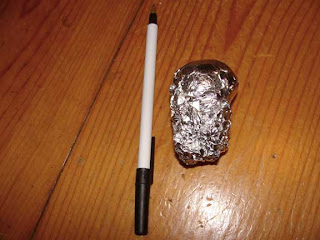 Y'all have a great evening and Merry Christmas to all!
Posted by cousin nancy at 6:13 PM