Today has been great. The first thing that I did this morning, after breakfast, was to take care of my paperwork, then instead of walking I cleaned the trailer, because Marie-Clare and Lawrence, from San Angelo, had made an appointment with me earlier in the week, to come out and meet us and take a tour of the rescue ranch, around two-ish—before heading down to Houston!
Around one-ish, the trailer was sparkling clean and it looked like we didn't live here, and I had had a good workout. Around two-ish they arrived and I knew that I liked these two, the minute I saw them. After greetings and introductions, outside the trailer, "We brought you a gift," Marie-Clare said, as she pulled two bags out of her car and handed them to me. "I own a company in San Angelo called, "Blazin' Brittle," and there are two packages each inside the bags, of the three different Artisan made, spicy pecan candies I make." Tony's and my eyes lit up, because we love brittle and pecans.
After we thanked them for their sweet gift I said, "We have a gift for y'all, too." Then I handed them copies of my first two books. After thanking us and putting the books inside their car—Tony and I gave them a tour of the rescue ranch, so they could meet all of our dogs and then we went inside the trailer for a fun, but short visit and before we went into Outer Space, T. gave them a package of Miles of Chocolate to try, that Ben had given to us a few months back. After they left—we left for Kerrville to get groceries for our first Italian Christmas dinner. We're talkin'—Cousin Nancy's Lasagna, which Tone loves.
When we got back home, after putting up the groceries, Tony and I decided to sample Marie-Clare's brittles. We started with the ginger pecans, "Ginger Sunset Blazin' Brittle," and it was absolutely delicious, so then we opened up the sack of smoky, chipolte pecans, appropriately named, called, "Blazin' Brittle," and we loved it, too! After we drank a glass of water, we ate a piece of the cinnamon pecans, "Cinnamon Girl" and just like the other two, mouth watering brittles—it was totally delicious, too and we couldn't decide which brittle was our favorite. 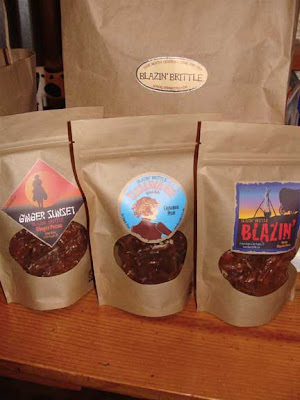 "Tony, Kinky has got to try these. I'm going to call him right now, to see if it is okay for us to come over."
"Are you going to give him three sacks of the brittles?" Tone said, wearing an upside-down smile on his face.
"Yes."
Five minutes later, we walked into Kinky's kitchen and I handed him his sack of the three varieties of tasty pecan candy to try. As Kink sampled and munched happily on the candy, I told him all about our fun visit with Marie-Clare and Lawrence and her Blazin' Brittle company, where her candy is made in San Angelo, Texas—U.S.A.! And, needless to say—Kinky thought the brittles were delicious, too. "I just read an article," Kinky said, as he grabbed another piece of candy, "that says that pecans are the healthiest nut to eat and that peanuts are the lowest on the totem pole, when it comes to nutritional value..."After a fun visit over at Kinky's Lodge we came home.
This evening before I started to write tonight, I received a comment on yesterday's blog from 'Erb, my dear doctor friend, up in Boston, who before retiring—used to operate and repair people's brains for them.


I blew up the wall next to your desk by clicking on 200% on my browser. My next reaction was "aw shucks", our Holiday Card was not on your wall. I'm trying to be a brave little soldier about it.
Happy Holidays, and as Kinky says, may the god of your choice bless you.
'Erb and Karen
December 22, 2010 5:44 PM
Instead of posting a comment back to him, I decided to write it here instead.
"Hi "Erb and Karen! We received your cute, funny holiday card two days ago, that you designed and we loved it and so did Kinky! Thank you for making us laugh. The reason that y'all's card was not on the wall in my office is because I put it on the refrigerator, because I spend more time in the kitchen and I want everyone who comes inside the trailer to see it. I love the picture of you and Karen ballroom dancing on the front that reads: "On New Year's, Dance With A Purpose Or Dance with a..." and when we opened up the card and it read: "Porpoise! Happy 2011" and there is Karen dancing with a porpoise in the water—we laughed out loud. Thank y'all for sending it to us and Happy Holidays to y'all. We love y'all and miss you. Keep dancing! 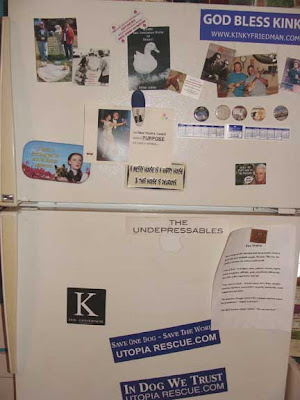 Well, it is time for me to hit the hay, because I need to get up early, so I can do The Harley Show at 7:45 in the morning.
Y'all have a great evening!
Posted by cousin nancy at 9:38 PM

Retired? If you click on the neurosurgical side of my website under Photo of the Month, please don't tell that 87 year old lady that I was retired last month when I fixed her lumbar spine!
Also, you didn't divulge the fact that above my return address on the envelope I said there were no "snakes, stickers, scorpions or centipedes". That's the kind of phobias you get when you're a city slicker like me.

Also, I forgot to mention. If you happen to show Kinky my 87 year old patient, make sure you let him know that she reads at an 88 year old level.
'Erb

Hi, 'Erb! I'm, sorry. I thought that you had retired last year for some reason. I will check out your 87 year old patient and show it to Kinky and tell him that you said, "She reads at an 88 year old level."

And, when I saw the back of y'all's envelope and read: "No snakes, stickers, scorpions or centipedes here" with the arrow pointing to y'all's address I laughed out loud! I love you and Karen and thank you for sending us the card. Happy Holidays! Love and Best Wishes, Nancy