This morning Tony woke me up early so I could do the Harley Show at seven forty-five. Doing Harley's radio show was fun, because as always, Harley had me laughing and Pumpkin was his Pet Of The Week. She's the cute little one-year-old dog that we rescued from the pound the day before Thanksgiving. I love her eyes. 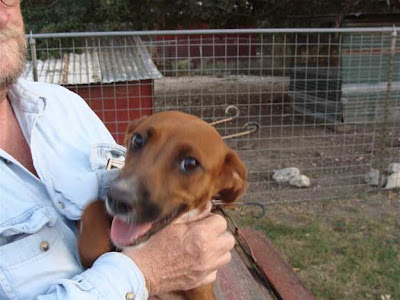 This morning I didn't walk with Leslie, because my deadline for writing my column in "Texas Animal Imprints" magazine is due tomorrow, so I spent much of my morning working on it, in between several phone calls. One of the phone calls was from our good friend Carol, inviting us over this afternoon so, she and James could teach me how to weld. "James and I talked earlier and we've decided that I am going to teach you how to use the plasma cutter and James is going to teach you how to weld..."
"That sounds great, Carol, but I'm not sure if we can do it today, because I am in the middle of writing my column for "Texas Animal Imprints" and we have to go to Kerrville to run a few errands. Let me call you later in the day..."
At one o'clock I officially came down with a bad case of "writer's block," so T. and I took off for Kerrville in Buttermilk. On our way to Kerrville I told Tone about Carol's earlier phone call. "Carol told me that she and James had just finished reading my blog about them and said it had made their day and..."
"How sad," Tony joked. "The next time that I see them, I'm going to kid them about it and tell them that they need to get out more."
"Well, that just might be today if we get back home early enough. Maybe welding will help end my "writer's block" like my water coloring did..." An hour and a half later we were back home.
"Tony, please call Carol and James and see if it is too late for us to come over, while I put on my welding costume. Carol told me to wear the oldest, worn out clothes I have, because I might want to trash them after handling and welding on old dirty, rusty pipe. I wish that we had had the time today to go to Gibson's, so I could have bought a welder's cap..."
While T. talked to Carol on the phone, I shed another pair of 501 Levi's which were made closer to home in Mexico, not Haiti like the other pair was, and then I dressed in my old, oversized paint-stained sweat pants and sweatshirt. Then we left the ranch.
After howdys and hugs we quickly got down to business. "Nancy," Carol said, "you're going to get to wear this painted welding helmet that we bought at a garage sale. When I saw it—we laughed.
"I love it!" I said, as they helped me put it on and showed me how to use it. "I can't wait to get my own helmet and paint it pink! Won't that be cool!" Then we put on our helmets and that is when Tony shot Carol and me. And, please note: that it is not my new teeth shining brightly—it is the protective eye cover. 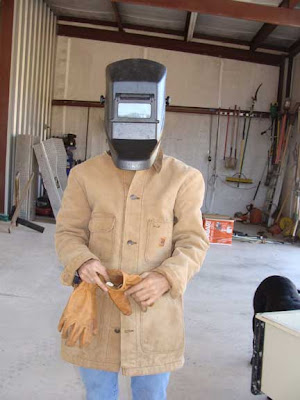 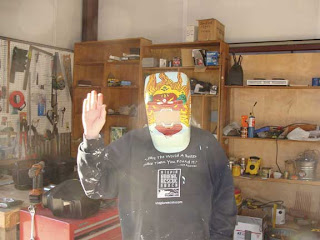 Before Carol sat down to give me my Plasma Cutter 101 lesson I noticed a pretty piece of pipe laying on the floor. "Carol, this is really cool looking. You should keep it and put candles in it. I really do like it. You should name it The Piece Pipe, because it is made from three pieces of pipe." Carol & James and Tony started laughing.
"No way," Carol said. "It's what I have been practicing on. You can have it. I don't want it."
"Tone, guess what we are getting for Christmas from Carol and James—The Piece Pipe," I joked, and then I shot it. 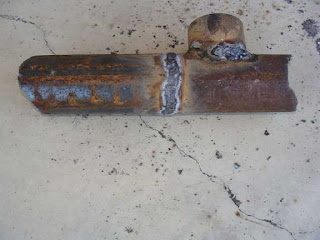 Then Tony took this picture of Carol and me getting ready for her class. Don't we look feminine! 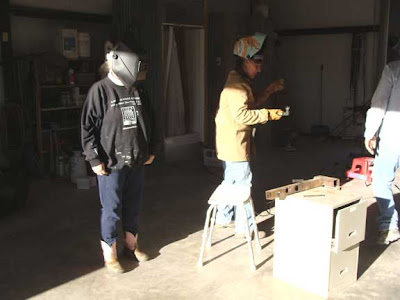 Here is a short, nineteen second video that T. took of me using the plasma cutter for the very first time after Carol's great lesson. And I especially love Carol and James positive feedback.
After I had learned the basics of how to use the plasma cutter from Carol, which I now want. I put on Carol's heavy, leather welding gloves and then James sat down with me and patiently showed me over and over again how to weld, which is a whole lot harder to do than it looks and it was pretty scary when you have hot sparks flying everywhere around you.
James was a great instructor, too and his lesson ended after I had used up five of their welding rods and had learned the basics of welding. Before we took off our helmets I asked Tony to shoot us one more time. 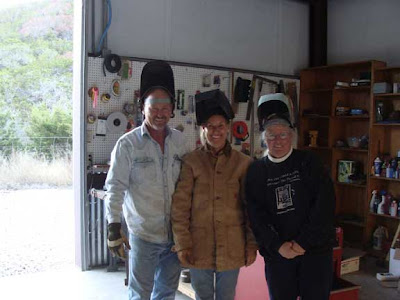 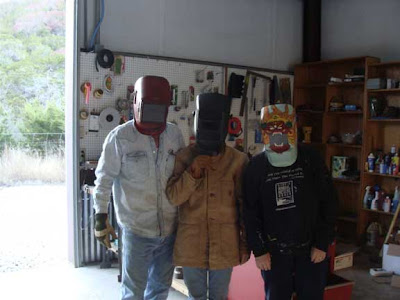 As soon as we got home the first thing I did was punch in Kinky's phone number. "Kinky, I have some exciting great news for you! Guess what! I'm a welder and I know how to use a plasma cutter, too! Carol and James taught me today."
"Oh really?" Kinky said, and then he chuckled. "That is some great news for me, Nance."
"I know," I said. "If you ever need something welded—I can do it for you, but I need to practice some more before I do it and..." After we talked about my new learned skills, we talked about Maude. "Maude is such a great, little dog and I am so glad that Tony and I adopted her. This morning I couldn't find her in the trailer and started looking for her. I finally found her sleeping on a  pillow, under the bench in our bedroom, where Yoda used to sleep..."
Today has been so much fun thanks to Carol and James. And because of them—my writer's block went away and I have finished writing my piece for "Texas Animal Imprints" January/February issue. Thank you, Carol and James. Tony and I love y'all and we feel so honored to be your friends and neighbors!
Y'all have a great evening!
Posted by cousin nancy at 9:32 PM

You might love Pumpkin's eyes, but I love those 2 cute little antennae coming out of the top of her head in this picture!