This morning I got up really early so I could do my chores before calling Harley at seven forty-five to do his radio show. After a fun visit with Harley, I started cooking breakfast. Normally I don't cook us breakfast, unless you count boiling water for T.'s oatmeal cooking, but last night I promised Tony that I would fix him Huevos Rancheros this morning, because it is one of his favorite meals that I cook.

For those of you who are not from Texas, Mexico or the Southwest, Huevos Rancheros is basically eggs cooked how you like them, covered in salsa and served on a hot corn tortilla, with a side of refried beans and hash brown potatoes, but I make mine a little different every time, because I like to be creative with what's currently in the refrigerator.

This is how I made Tony's Huevos Rancheros this morning. I cooked some home made hash browns with onion and bell pepper while the corn tortillas and a couple of slices of leftover Thanksgiving ham, warmed inside the oven, while some homemade pinto beans cooked on the stove top. When everything was heated up, I cooked two eggs over medium and then threw it together.

I plopped the hot tortillas on the plate, covered them with some homemade salsa, divided up the hash browns, topped them with the ham with the eggs on top, and the beans on the side, and Tony's eyes lit up when he saw what he was going to eat for breakfast.

As Tone ate my latest version of Huevos Rancheros, he kept telling me how delicious it was and then he says, "Nance, you need to make these for Kinky and Frank..." So, I called Kinky.

Twenty minutes later Kinky and Sophia greeted us at the kitchen door and then T. took off to a bunkhouse to go tell Frank that I had made Huevos Rancheros for him, too. During their breakfast there was a lot of laughing and they told me that they loved my Huevos Rancheros—which made my day and it was still early.

When we returned to the rescue ranch, our great volunteer Jim, was already here walking our dogs. While Tony did his outside chores I walked six miles with Leslie and right after I had finished Mama and Abbie started barking, so I looked out the front door to see who was here—it was Eileen, another one of my favorite dog walking volunteers and her dog, Callie was with her. So, I went outside to greet her and to pet Callie Dean, the super dog that she adopted from us on Memorial Day—that Sharon Griswold trained.

"Nancy, I came out to give you the money for the dog's Christmas dinner, but I can't stay long, because I have to..." After I thanked her for the donation I had a really fun visit with her and C.D.

"Callie Dean sure turned out to be one beautiful dog," I said. "She is so lucky that you adopted her and..." Before Eileen left, I invited her inside the trailer to show her my latest decorating and she told me that she loved it, and that June, Ellen and her were excited about coming out Christmas morning to help us cook and serve our dogs their home cooked Christmas dinner! "Tony and I are thrilled that y'all are coming out to help us—it will make our Christmas great."

Late this afternoon, because of another pile of paperwork that I had to take care of and mail out, Buttermilk took us to Kerrville, so we could buy our dog's holiday dinner at H-E-B. Our first stop was at Wolfmueller's Books so I could drop off the movie that Mari, of the NoMads, had loaned to me, so she could pick it up there and to also say hi to our friends Sandy & Jon. When we arrived at their bookstore it was packed full of happy customers buying tons of their books. After a fun, but short visit with them and their son Kurt, who was in town visiting them—we took off for H-E-B.

Before we walked inside H-E-B I dumped a ton of letters into the mailbox outside and then Tony and I grabbed two shopping carts and went inside. T. followed me up and down the isles as I put our groceries into my cart and he put our dog's holiday dinner in his basket on wheels. In less than thirty minutes we were standing in line to check out our groceries and I went first.

After writing a check for sixty seven dollars and twelve cents I said, "I'll wait for you outside, Tone." Several minutes later Tony walked out of H-E-B. "How much did it cost?" I asked, as Tony handed me the receipt.

"A hundred and nineteen dollars and ninety-two cents."

"That's seven dollars less than what we spent on Fay's Thanksgiving dinner for our dogs," I remarked. "I guess it is because we didn't buy dinner rolls and bought cheaper stuffing this time." 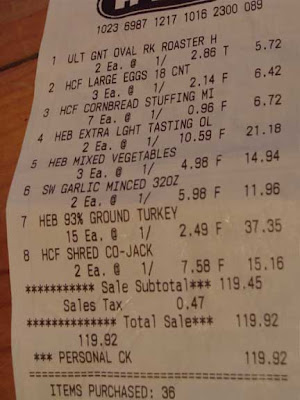 On our way home I said, "I think the next time we go to H-E-B I'm going to buy seven dollars worth of dinner rolls and more stuffing so no one wins the "Friendly Texas vs. Canada Food Fight." T. started laughing. "No, I'm serious. I love Fay, June, Ellen and Eileen for being so nice and covering the cost of our dog's holiday dinners this year and as far as I'm concerned— they are all winners in my book."
"Nance, the next time we go to H-E-B please buy some Static Cling, because I am tired of being shocked everytime that I open up a gate. Please put it on your shopping list."
"Why don't you just put a little piece of wood in your pants pocket, instead?" Tony starts laughing so hard, he nearly wrecked Buttermilk. "What's so funny? Wood will keep you from getting shocked."
"No, it won't, Babe," Tone says, followed by a laugh, as he taps the steering wheel hard and shakes his head sideways. "I'm sorry, but wood is conductive to electricity and..."
Y'all have a great evening!
Posted by cousin nancy at 8:24 PM

It could be that age has also affected my comprehension, not just my memory, but I really want to find out for sure, so please help me, Obewan Nancy - you are my only hope.

Hi, Mari! I was just checking out my post and caught the last part, that somehow got deleted, which I blame on Mercury in Retrograde. I just corrected it and bridged the gap, so now it should make sense—I hope.

P.S. I am still telling everyone about RockBox and how much fun we had!

AHA! Now it DOES make sense! Thank you but no thanks to Mercury in Retrograde!

Just like you my Mom in Bellaire is also talking up the Rockbox, only she simultaneously shows everyone her copy of Texas Animal Imprints (I gave her my subscription copy that arrived after you had already given me a copy of that issue). She embellishes HER Rockbox story by pointing to the picture of "Media Star" Tony and by then bragging to all that she sat next to him AT the Rockbox!

Say - you could do the same thing! After all, you sat on the OTHER side of that "Media Star" Tony at the Rockbox!