The Sign! Rest In Peace Bob! or Harry! or Tattered Volunteers!

Today has been great. This morning I had an important meeting, in Outer Space with Lee, a future Eagle Scout.

After the meeting, Tony and I took off in Trigger to go to Billie Gene's Restaurant, in Kerrville, because we had a lunch date with our dear friend Jim, The Mineral Man. We were the first to arrive and when we climbed out of Trigger, I looked up and started laughing. "What's so funny?" Tony asked.

I pointed up towards Billie Gene's latest, hilarious sign and then Tony started laughing, too. "Billie Genes and Hoegemeyer Animal Clinic have the best signs in town!" I said. "I love them because they always make me laugh out loud." 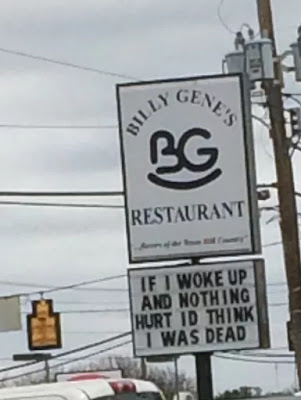 Tony and I had a really fun lunch with Jim. Jim and I ordered the exact same thing, The Special and Tony ordered catfish which were all totally delicious.

While we were eating, we spotted a couple, dining outside on the deck, with their beautiful Cockatoo. So I grabbed my cell phone and snapped these pictures of the couple sharing their lunch with their feathered friend. 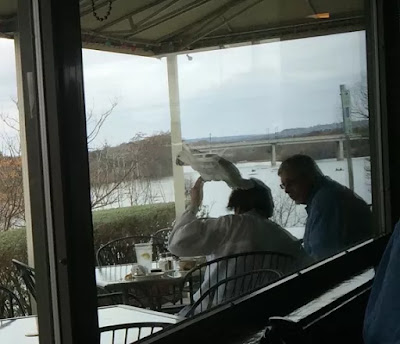 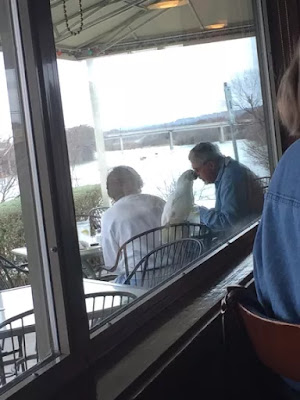 After our fun lunch with Jim, we went to the big H-E-B, to pick up a few groceries. Then we took off to go vote, because we are big fans of early voting. Then we came back home.

When we got back home Carlton was flashing on top of the breakfast bar, but I ignored him, because I wanted to take my new, bigger Bob outside and put him inside my pretty, pink writing cabin, until we use him in our upcoming Longmire—Texas Style video spoof.

You see the other day after Bob had arrived safely, from the International UFO Museum, in Roswell, New Mexico, Tony blew him up partially for me and then he stopped, because Bob was already nearly standing six feet tall. So I decided to put Bob in my office for safe keeping, but because Bob was already so big and taking up way too much Space I made the decision, the other day, to keep Bob, inside my cabin. Here are a few pictures of my new Bob. 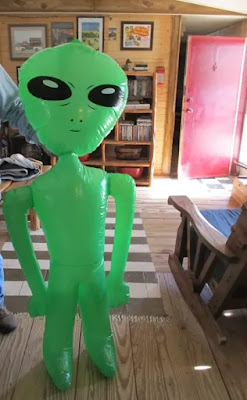 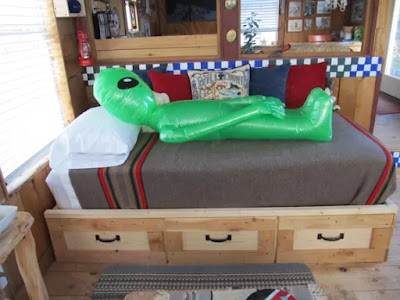 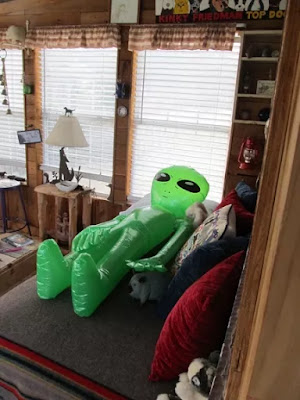 After I put Bob to bed to rest in peace, I came back inside and pushed Carlton's button, and heard an old, familiar voice say, "Hey Cousin Nancy, this is a voice from your past. This is Harry Barnard and I am calling you, because...." Then I immediately picked up the receiver and punched in Harry's phone number.

"Hi Harry! Oh my goodness, it is so great to hear from you! How in the world are you and Wanda doing? And where are y'all?...." I had the best time talking to my dear, eighty-something-year-old friend Harry. We laughed and talked about life and what all we've been up to. And talking to Harry today really did make my day more than great.

Harry is an awesome friend of ours and so is Wanda, his super, sweet wife that has one of the cutest laughs I've ever heard. Kinky, Tony and I have known Harry & Wanda for over twenty some odd years and we love and adore this couple. So you can imagine just how great it was to talk to Harry today.

In 1964, Harry wrote Tattered Volunteers: The Twenty-Seventh Alabama Infantry Regiment, C.S.A. "It is more than an exciting story. It is a detailed and documented record of brave men. Such a mass of records has seldom before been made available in one book." 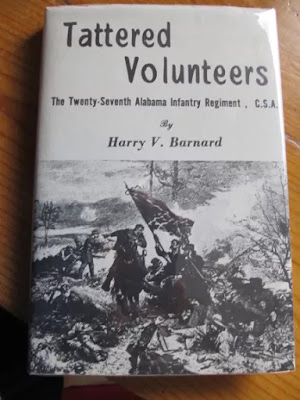 "The book tells the story of the Twenty-seventh in the words of the men who served in it, from the official records of the Confederate and the Union armies, and from the service records of the men who served in the regiment." And Tony and I have a signed copy of Harry's fabulous book, which is now considered to be a rare book and we cherish it as much as we do our friendship with Harry & Wanda. "We love you, Harry & Wanda! And tell Kathy & Jim that we said, Howdy!"

So once again—Life is Good.

Y'all have a great evening!
Posted by cousin nancy at 6:56 PM