Today has been great. Our new friends/volunteers, Paul & Janet, are now hooked on Longmire, as much as all of us are, because recently I had loaned them my first three seasons of Longmire DVDs to watch.

Anyway, Paul sent me a beautiful, humorous story today that he had written about his sweet dog Bessie. And I totally enjoyed reading it. He is definitely a very talented and gifted writer. And he suggested that I might put it up on my blog, so here it is to enjoy, with a picture of him and of Bessie. 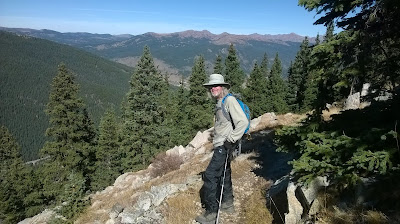 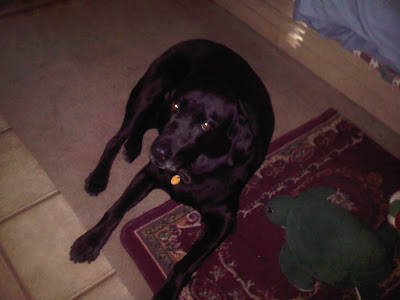 She usually wanted to sleep late so I was surprised when I heard a "woof." As I ignored her, I rolled over and went back to hitting home runs for the Cardinals as my adoring fans gave me standing ovations. But there it was again, "woof." Okay, I guess you really have to go. As I shook the webs from my head, I heard that familiar rat-a-tat-tat on the roof.....it was raining.  Are you sure, I said. "Woof, woof" was her answer. After putting on raingear and a pair of shoes, I noticed it was four in the morning and was the coldest night so far at 35 degrees! As we moseyed along at a pace that the proverbial tortoise would admire, she finally found an area that interested her. But wait a minute, there was another spot across the street that was even more inviting.  As we meandered across the asphalt, a wild fox appeared in the distance and all bodily functions were put on hold.  She lunged and barked as Mr. Fox just stood there and seemed to be amused. "Another tourist" he appeared to be smirking.  Slowly he walked across an open field and flicked his tail as if to say, catch me if you can. Always up for a challenge, she lunged and pulled and barked until the fox was out of sight.  At that point, I was thoroughly soaked and my bare fingers were turning blue.  Of course, now she had to start the search for the perfect spot all over again.  As she sniffed and looked, the rain intensified.  Finally she espied a grassy area and took dead aim on it.  Once on the deposit-worthy ground, the ritual of smelling and half-fanny-down began.  After several false alarms, she let her fly! Now it was my job to retrieve this "gift" and dutifully place it in a designated receptacle.  And then it occurred to me, I had forgotten to bring the necessary wrap and bow. In other words, I had no bag. What should I do, take a chance that the neighbors were either deaf or blind (or both) and just ignore it or somehow mark its location and return with a bag?  About then the training from St Nell and the nuns kicked in and I knew that I would obey the rules.  As we slowly walked back home, the rain turned to wet snow and the wind picked up.  I finally got home, snagged a couple of bags (it was a particularly generous gift this morning) and started to retrace my steps.  It was then that my flashlight decided to take a rest. But enough light, I thought, to be able to see.  I finally found the big black rock that marked the sacred ground and commenced to scan the area with the precision of a laser.  Ah, found it....no false alarm. Look..., look..., eek....my left foot found it!  Did what I could with dim light and wet plastic bags while uttering epithets about ancestors and female dogs!  Finally, I was back home, out of the snow and ready for return to dreamland. But she had another idea. After I do my business, she said, I always eat. NO, not this time, I said firmly.  As she turned on the charm and looked at me with those big brown puppy eyes...I gave in.  Got the kibble, her supper pan, filled the water pan, and placed both in front of her.  She looked up at me and said, but I always get my special food in the morning.  It was a canine conundrum....experience dictated that I get the meat and properly place it on the kibble.  As she watched with breathtaking anticipation, I finally got her food prepared "just right" and she began to eat.  Wide awake and starting to get hungry myself, I decided to make it a party and fix some pancakes.  Being the gourmet cook, I only use Aunt Jemima pancake mix! But, alas, her cupboard was empty, so I decided to make a little omelet.  I took the egg carton from Amana but noticed that I was out of orange juice and what is an omelet without juice? Okay, forget the juice I thought, just brew some coffee.  Got out the omelet pan (or more accurately the only skillet I own), melted the butter and started to break the eggs. Wait, what's the matter with these eggs?  They wouldn't break. After much high-level analysis and critical thinking, concluded they were frozen!  "Oh for crying-out-loud, what else can go wrong?" I said.  Maybe the altitude affects the frig temperature and a setting of low was required or its contents freeze, I thought. And, yes, the carrots and onions were frozen too.  "Yep, that must be it," I said as I turned the frig knob to low. At this point, Bessie was sound asleep on my bed, stretched crossways so that the only unoccupied space were corners which could only comfortably be used by a contortionist.  After more special words and ancestral references, I washed the lonely skillet and took out the cereal.  So three hours after the initial woof, I ate my flakes and prepared for the day.  As I looked to my left, out of the window, I saw the sun low on the horizon.  It was beautiful. A big, orange, glowing ball offering warmth and light for the day.  It was then that I realized she really had given me a gift that morning. Without her I would have missed this little glimpse of god and his wonder.  Thanks, Bess, I said.  Hearing her name, she sleepily lifted her head and then immediately went back to sleep."

Y'all have a great day!
Posted by cousin nancy at 1:40 PM

What a great read this story is! I am sharing the link to your blog with like a gazillion people I know, especially those who own Labs (ok, two of them have Labs). And I don't do social media or there would be several gazillion people to forward your link to!

Hi Mari! I love the story, too. Paul's a great writer just like you are.