The Life and Times of the Thunderbolt Kid!

The last few days have been great. I took Wednesday off and Trigger and I went up to Fredericksburg to meet my sweet sister for lunch. And so I could meet Sophie, her new, precious Boston Terrier.

We first ate lunch, at Hilda's, that several friends of ours have highly recommended we try. I am glad that we ate at Hilda's too, because their Mexican food was absolutely delicious, the staff was super friendly and Cindy and I got to eat lunch, outside on their porch, with Sophie beside us.

After that we went over to a nearby park and went for a walk around the park several times and then we had a fun visit, sitting inside the shaded gazebo, across the street from the jail.

While we were catching up with each others news I told my sister about the book that I'm reading, that I recently purchased at Wolfmueller's Books. "Cindy, this is one of the funniest books that I've ever read. Seriously, all I do is read a paragraph and then I laugh out loud. The Life and Times of the Thunderbolt Kid" A Memoir by Bill Bryson is an unbelievably great read. Bryson was born in 1951, in Des Moines, Iowa and it is about him growing up in the Fifties. You've got to read it as soon as you can, because it reminds me of us growing up in Fort Worth...." 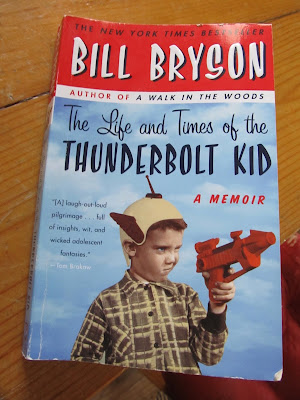 Today has been a lot of fun, too. This morning I went outside, about 9:00, to greet Kay, Janet, and Paul, three of our super friends/volunteers that showed up first. When I caught up with Janet, who was returning Layla to her and Little Girl's pen, I asked where Paul was. And when I went for a walk, down to the creek, with Janet and Jack Black I found out that Paul and his sweet, old dog, Bessie, had already taken off to Colorado. "Have a safe trip Paul!"

A little later, the rest of our dear friends/volunteers started arriving. When Eileen showed up she was carrying a blue, paper sack. After greetings, Eileen said, "Nancy, I got a little something for you and Tony's Valentines presents. It's not much." Then she handed me the pretty sack.

I looked inside and burst out laughing. "Oh my goodness! I love it, Eileen! Y'all look at Eileen's presents!" Then I held it up for all to see and they all started laughing with us.

"The Valentine candy is for Tony," Eileen said, with a chuckle. "And when I saw this stuff toy I had to buy it, because it looks just like Little Debbie."

"Did it come with the eye-patch?" I asked.

Eileen laughed. "No, I made that."

"Thank you, Eileen. I love it," I said. "I'm going to have Little Debbie wear this eye-patch when we shoot the final scenes of Longmire—Texas Style! And I love that pretty, little, pink bow, too..."

Then a few minutes later when Tony and Kermit drove up I showed him his candy from Eileen and the adorable, stuffed toy and like us he laughed out loud, too. "Tony, will you please drive up to the house and get Henry, so Kris and I can take him for a walk, down to the creek?" Tony and Kermit took off and a minute later, Kris and I took off with Henry.

Henry did great on his hike with us. When we arrived at Big Foot Wallace Creek, Henry waded into the water and then he came back out and walked over to Kris, who was sitting on a huge rock. "Henry," Kris said. "Sit." Henry immediately sat down for her and as she gave him a doggie treat, she said, "Good sit, Henry. Good sit."

A little while later, I realized that we hadn't seen anyone walking dogs around us. "Maybe we need to head back, because it might be time for lunch," I said. So we took off with Henry and seconds later I heard Kermit. "I bet Tony is coming to pick us up, so we can go to lunch." I was right and I was wrong—it was Tony and June coming to get us. And it ended up that Tony and June took Henry, with his wet feet, back to the rescue ranch and Kris and I walked back.

As always, lunch was delicious, at the Koyote Grill, and we had a total blast with our dear friends. When I told them about reading Bill Bryson's hilarious, laugh out loud, book The Life and Times of the Thunderbolt Kid: A Memoir we all agreed that we love Bill Bryson's books and then we started reminiscing about growing up in the Fifties. We laughed and laughed about all of the black & white television shows back then, when our families got their first color televisions and all of the crazy things that we did and those TV dinners, etc.

When Tony and I got back home I took Eileen's sweet, Valentine's gifts out of the pretty sack and then I placed them on top of our breakfast bar and took this picture. 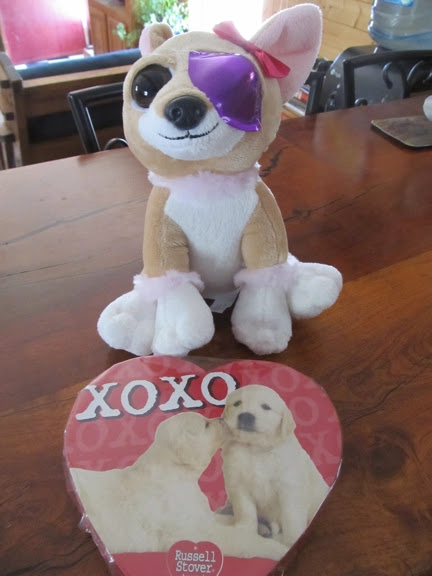 And that is about it for today.

Y'all have a great evening! And as soon as you can read Bill Bryson's hilarious The Life and Times of the Thunderbolt Kid: A Memoir!
Posted by cousin nancy at 4:39 PM