The Day After! or Henry! or First Carrot!

Today has been great. This afternoon we met our good friend Jim "The Mineral Man" for lunch, at Billy Gene's Restaurant, because we love their Monday Special—Chicken Fried Chicken, Twice Baked Potato, Squash Casserole and Green Beans. And to say the least, "We all ordered the exact same thing, except Tony had sweet tea and we had regular iced tea."

While the three of us were eating our delicious lunch together we invited Jim to go to James Avery with us, because Tony and I wanted to get each other something to celebrate the Day After Valentine's Day, because we didn't celebrate Valentine's Day.

Then we started talking about the old cars that we have owned when we were young. Jim told us an hilarious story about his '55 Chevy and him going out to California in it. And on his trip back to Texas he had to carry quarts of used oil, in the trunk, because he had to keep adding oil. So, because I  too, had carried a case of used oil in the trunk of my first car and was constantly refilling it, I told them about my $50.00, rusted-out Studebaker that had a clutch, that I owned for only one week. Because when I drove it up to Fort Worth the first thing my dad said when he saw the sorry condition that it was in, he said, "Nancy, a person's car says everything about them. Follow me to Jim's Used Cars, because I am going to buy you a nicer used car to drive." And he did—a dark blue, '69 VW Bug with a white interior and eight-track stereo. And I named it Blue.

Then we started talking about our dogs. "Charlie," Jim said. "He is ten years old and...."

"What is it?" They both asked.

"I'm naming him after the Henry character in Longmire. Is it Henry Running Bear?"

"No," Jim replied. "I believe it's Henry Standing Bear."

After a fun lunch we followed Jim over to James Avery, on the other side of I-10 and it didn't take us long to pick out our Day After Valentine's Day presents. I gave Tony a beautiful, silver arrowhead necklace and he gave me an stunningly beautiful silver guitar pick necklace.

Our last stop before leaving Kerrville was at the big H-E-B store, on Main Street, so I could pick up a few groceries, but most importantly— to buy Henry Standing Bear some carrots to munch on while he is teething. (Ellen, our dear friend/volunteer, who came out Sunday with her sister, had suggested that we give Henry carrots instead of chew toys.) So, the last thing that I tossed into our grocery cart was a huge sack of carrots that weighed about ten pounds or so I thought.

When we got back home the first thing I did was take a picture of the carrots and that's when I discovered that they only weighed five pounds—not ten pounds. 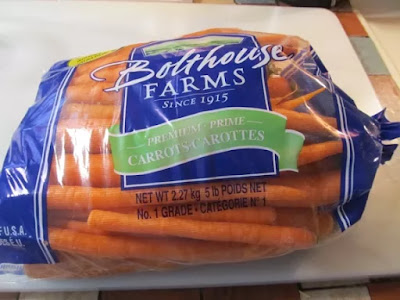 Then I washed off a big carrot and peeled off the top layer. Then I went outside and gave it to Henry Standing Bear. And he totally loved it! 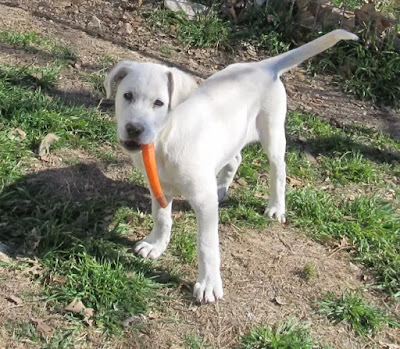 And this is my picture of Henry Running Bear. 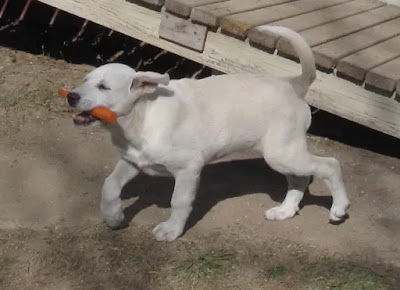 As of 4:45, as I finish writing this, Henry Standing Bear Simons has gone through a total of two carrots. And I am hoping that tomorrow morning we will find that his coat is still white and not orange colored, because I don't want to have to change his name again, to Henry Orange Standing Bear Simons.

Y'all have a great evening!
Posted by cousin nancy at 4:47 PM