Today has been great. This morning our dear friends/volunteers came out to walk our dogs for us and so did sweet Marguerite and Scout.

Marguerite and I first took our pups to meet and play, in the pink cabin's front yard. When we first unleashed our dogs they took off in opposite directions and it must have taken about ten minutes before Scout and Henry started sniffing each other. It was hilarious, because neither of them wanted to play together.

Then Marguerite started tossing Scout's super cool toys, in the yard, for them to chase, in hopes that would get them to playing with each other, but it didn't. So Marguerite and Scout sat down at the picnic table and then she picked up Henry, and Scout and Henry basically ignored each other, except for a couple of kisses they gave each other on their noses.
. 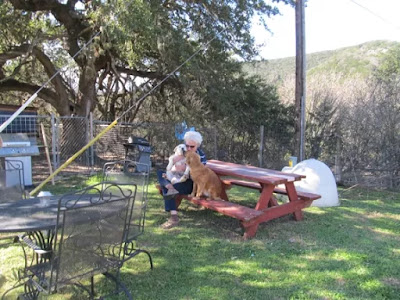 So we decided to take Scout and Henry for a walk down to the creek and that was a lot of fun, because it was fun watching our pups stop and sniff everything on their path. When we got to the creek Henry walked into the cool water, about up to his ankles and then he just stood there like a furry statue, while Scout cautiously stuck her toe into the water. And the funny thing is both of our dogs liked each other, but neither one of them seemed interested in playing with each other.

A little while later, all of us took off for the Apple Store, in Medina, because everyone wanted to eat their delicious Friday Catfish Special. And while we were eating lunch, a very nice man showed up and he started setting up his musical equipment outside, near our tables and few minutes later, when the musician began to sing a tune it really got Henry's attention—big time.

And once again, like a furry statue, Henry Standing Bear just stood there, next to our table, watching and listening to the man sing and it truly mesmerized him. And the next thing Henry did was lay down, in front of the friendly musician and just stare up at him. Seriously, a beautiful Poodle could have walked past him and flirted with him and Henry would not have noticed her, because he was so focused on watching the man play his guitar and listening to his music. 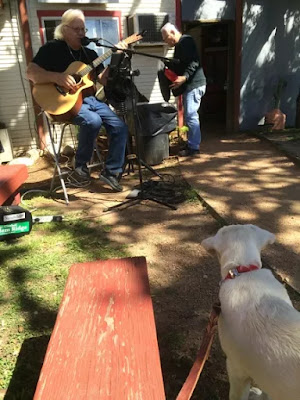 Henry caused the nice musician to smile and laugh, after he had finished singing his first tune and it made all of us laugh, too. Then the man took a break and visited with all of us and we mainly talked about our dogs and Henry's fondness for music.

"I have to warn you about Scout," Marguerite said, followed by a chuckle. "For some reason when Scout hears musicians sing—she always starts singing/howling with them. And I am glad that she didn't try to harmonize with you when you were singing."

That made the man laugh, and say, "That's fine with me. I'm used to it. In fact, over the years I've made several dogs howl when I play my music."

When it was time for us to leave, I got up to go pay our bill inside, and Marguerite said, "You don't have to do that. I've already taken care of our lunch...."

So before I finish writing this tonight, I want to say, "Thank you, Marguerite for treating us to a fun, delicious, catfish lunch and for bringing your sweet Scout out to play with Henry, even though they didn't really play together. I think that they must of had the first date jitters and as all of us know—blind dates can be a little bit scary."

Y'all have a great evening!
Posted by cousin nancy at 5:51 PM