Today has been great. Just in case y'all still haven't read Paul's humorous, great story about his dog Bessie I hope that you will, because my dear friend Mari posted this comment about it. And Mari, who I also consider to be a fabulous writer left this comment:

"Mari of the NoMads said...

What a great read this story is! I am sharing the link to your blog with like a gazillion people I know, especially those who own Labs (ok, two of them have Labs.) And I don't do social media or there would be several gazillion people to forward your link to!

Henry had so much fun today and he also learned a lot. Henry's big adventure started around 3:00 this afternoon, when the nice kids, from the children's home came out to walk our dogs for us. Two girls asked Tony if they could please take Henry on a walk down to the creek.

About an hour later, I decided to take a break from cleaning up The Cabin and I walked down to the creek to say hi to Karon and to see how Henry was doing.

The girls and Henry met me on the path and Henry looked really happy. "How's Henry doing?" I asked.

"Great! We've already taught Henry how to sit on command by using the dog treats that Tony gave to us. Watch this, Nancy. Henry. Henry look at me! Okay. Sit." Henry looked up at her and sat. Then she immediately gave him a treat, and said, "Good boy, Henry."

"Thank you," I said. "Y'all are great dog trainers." Then they told me that Henry also went into the creek and that he definitely loves to be in the water. Then I asked if it was okay for me to take their picture, before they took off with Henry. 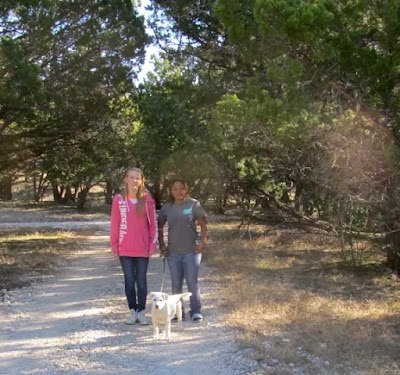 A few minutes later, I was visiting with Karon and Tony, near the creek, when the girls returned with Henry and he who was carrying a small log in his mouth. "We just taught Henry how to fetch! Watch this. Henry. Henry look at me." Henry sat down and looked at her. "Okay. Fetch!"

Karon, Tony and me watched in amazement as Henry took off to go fetch his little log. And this is him carrying his prized log. 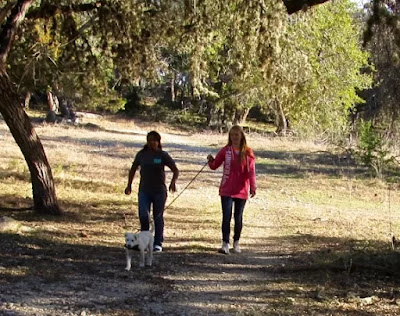 Then the girls took Henry to the creek and he immediately went into the water, up to his belly and then he started slapping the water and playing in the "it's too cold for me" creek. And then I took this picture and I love that pink thing. (Yes, I know it is probably caused from the glare of the sun, but I prefer to think it might be friendly Orbs or a pink Being.) 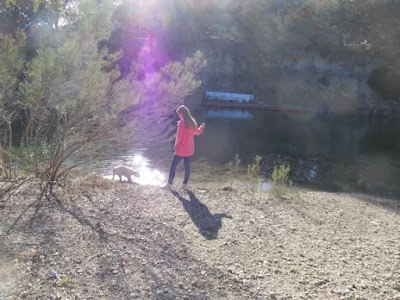 And that's about it for tonight, because I'm getting ready to watch Super Bowl 50's Half Time show.

P.S. I just realized the pink thing is also in the first picture, too!

Y'all have a great evening and don't forget to check out Paul's cool story about Bessie.
Posted by cousin nancy at 7:26 PM