What Would Ronnie Do?!

Today has been great. This morning after we did our chores outside, I came inside and called my big brother Ronnie to get some advice about tuning our ukulele's, because there is the Standard tuning, which is DGBE, just like the first four strings on a guitar and the Hawaiian tuning is GCEA.

After we had discussed how Ronnie and I had both learned how to play our uke's, as kids, using the Standard tuning he highly suggested that Tony and I use the Standard tuning, because Tone and I already know the guitar chords for it and I agreed with him, because we don't have to memorize new chords.

While Ron and I were talking about outdoor grilling, he told me that he got a Char Broil Gourmet Two Burner TRU-infared Propane Grill for Christmas and how much he was enjoying it, because every time that he cooks on it—his friends rave about how much juicier the meat was. "Nance, I'm not kidding you. It's the best grill out there for the money..." Ten minutes later it was adios-time for us.

Since it was too early to cook lunch for us I got on the Internet, went to Home Depot and looked at the grill Ronnie has and then I half-hollered down the hallway, "Tony, you need to come check this grill out. Ronnie got one for Christmas and they are only $269.00." Then Tony looked at the grill while I told him all of the good things that Ronnie had said about it. "Let's get one," I said. Tony said nothing and went back to his man-cave/office.

When I started to fix lunch I turned on the oven and set it to 350 degrees to preheat it. Then thirty-seconds later, I jumped out of my kitchen chair and turned the oven off, because I had forgotten that we had stored the rescue ranch dog's flour tortilla's,for their garlic-cheese quesidillas, in there.

When I opened the oven door to take out the sacks of tortillas I was thrilled that none of the plastic bags had begun to melt. Here's a picture I took of them—fresh out of the oven. 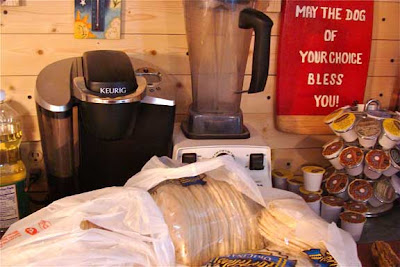 After we ate lunch I cleaned up the kitchen and when the oven had completely cooled down—I shoved the heavy sacks of tortillas back inside the oven for safe keeping, because I know that Roy, Abbie and Mama would steal them off of the counter and eat as many as they possibly could, before getting caught.

Late this afternoon a super nice couple came out with their son to "just take a look at our dogs," because they were looking to find a perfect companion dog for their sweet 10-11 year-old-son. Their son instantly fell in love with Molly and Chad, but he ended up liking Molly more, so after taking care of some paperwork—Molly has officially been adopted and we are going to keep her here with Rocky for about two weeks, so their son can stay focused on his steer, that he will be showing at an upcoming Junior Live Stock Show. And during the next couple of weeks, Molly's forever family plans to come by often, so they can visit her and take her for some long walks. And that is about it for tonight.

Y'all have a great evening!
Posted by cousin nancy at 5:32 PM