Today has been great and so much fun. Early this morning while Tony and I were finishing up our morning chores our super friends/volunteers: Jim, Kris & Jim, The Mineral Man and Eileen walked our dogs for us.

While our dogs were being walked down to the creek, a nice man and his family came out to look at our dogs, because the one that they had adopted from us ten years ago had passed away from old age. When I walked up to greet him, he was telling Tony that he liked George, but had been hoping that we had a smaller dog, because he and his wife had three young daughters. "How many dogs do you have now?" I asked.

"None. We only want one dog for our girls to play with."

"Then you've got to meet Jackie Kennedy Onassis!..." After I had told him about she needing to be placed in a one dog home, because she is an alpha dog and how sweet she was, we went over to her pen so he could meet her, but she wasn't there.

"Jim and Kris are walking her and Daisy right now," Tony explained. So, I jumped on Kermit and took off to go find Kris and Jim. When I saw them down by the creek I asked Jim, "Can I borrow Kris and Jackie, because we have someone interested in adopting Jackie?"

"Take off and good luck," Jim said, as Kris and Jackie got into Kermit with me. When we returned to the rescue ranch the man and his family smiled when they first saw her and then she stole their hearts. Then he told us that he wanted to adopt her and if she was too much for their little girls, they would bring her back and give George a try. A few minutes later, after he had signed Jackie's adoption form, it only took Jackie three attempts to jump up into the backseat of their big pickup. 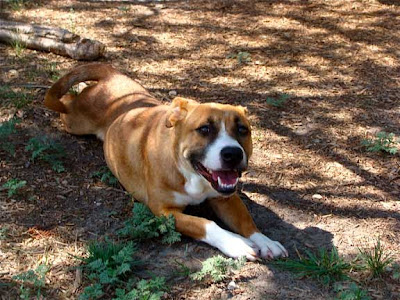 As soon as they drove away with Jackie O, Kris and I took George out of his small pen and put him inside Jackie's old pen and he was so thrilled. First he ran around his much larger pen and then he began happily marking his new territory. When Doug, Paul's friend that came out with him to deliver free dog food, walked up we smiled and laughed at George as we watched him run, jump and play with the toys that Jackie had left behind.

Twenty minutes later Tony and I walked in Koyote Ranch's Koyote Grill to eat lunch with our  friends/volunteers and to celebrate Kris' birthday. Tony and I had a blast with our six friends and our food was delicious. And of course, I talked too much, which I can't seem to quit doing.

After we had eaten lunch Tony helped me put candles on Kris' gigantic birthday cake. While Tony lit the candles for me I said, "Yesterday, when we went to pick up Kris' birthday cake at H-E-B I nearly dropped it instantly when the baker handed it to me, because it was so heavy and it wasn't even a Pound cake. Kris, you might want to come over to this table to blow out your candles, because Tony has a bad back and we don't need it going out again."

Before Kris blew out her twenty melting candles, that nearly caught Tone's sleeve on fire, everyone inside Koyote Grill sang The Happy Birthday song to her. Then I handed her the spatula to cut and serve her half chocolate/half white cake to us, because I am not good at cutting cakes or anything else.

Everyone thought Kris' humongous birthday cake was delicious and after all of us had eaten a piece of it we joked about how much was still left over. "I think you should divide it up into thirds and then freeze them separately, because each piece is large enough to serve several people at your next three birthday party's," I joked.

When Tony and I got home I phoned Kinky to tell him the great news about Jackie and I asked him to please keep his fingers crossed for her. Then I told him all about Kris' fun, surprise birthday party, with her birthday cake being the size of a small state and it made him laugh.

Just before dark-thirty Kinky invited me to come over for a short visit, because he knows that I will not drive in the dark, because I have poor night vision. While I was over at The Lodge Kink asked me to sit and listen to a song that was written and sung by, Ty Weatherford, for his upcoming CD, to be released in early spring and all I could say after listening to it was, "Oh my goodness! That is one beautiful song.
I absolutely love it. Can I listen to it again?" And that is about it for tonight. Happy Birthday Kris!

Y'all have a great evening!
Posted by cousin nancy at 7:47 PM