Today has been great. At 7:45 this morning I did The Harley Show with Harley Belew and it was a lot of fun as always. Harley's Pet of the Week was Miss Dee and I told him how happy we were about her and her best friend Mr. Rogers going to be adopted soon and they would live happily in Alabama with a really nice woman.

After Harley and I had adios-ed each other I listened and watched the KENS 5 morning show, while I started cooking Tony's breakfast and preparing our healthy smoothies. While I was putting kale into Jaws, (Our Vita-Mix blender) already filled with blueberries, strawberries, orange juice, ginger and raspberries, they started talking about today being Compliment Day and how important it was for everyone to give out compliments today.

So, when Tony returned home from drinking coffee with his friends at the Old Timer, in Medina, I was ready to give him a compliment, but it didn't happen, because when he walked inside The Cabin he said, "Nance, I just rescued two dogs running down Highway 16. Fortunately, they were wearing collars with tags and they are very nice dogs. When I saw them I pulled off of the road and said, "Load up" and they jumped inside Buttermilk. I need to go put them in The Okay Corral. I'll be right back."

Five minutes later Tony returned to The Cabin with one of the dogs collar and then he punched in the phone number on Cheyenne's dog tag and spoke to a nice woman about rescuing her dogs. Then she was the first to compliment Tony about his good work and then she thanked him over and over again for rescuing her two dogs. "I'm out of town right now and my friend Bobby is babysitting them for me, so I will call him and ask him to come pick them up immediately..." Here is a picture I took of Cheyenne and his buddy in The Okay Corral, waiting to be picked up. 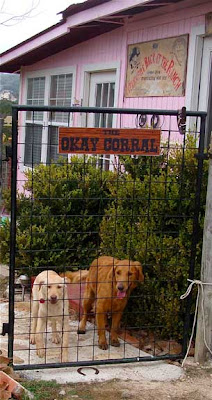 While Tone and I were doing our morning chores outside Bobby showed up and he could not thank Tony enough for rescuing her dogs.

When we were done with our chores outside, I came inside and started cooking us lunch and when Tony walked inside The Cabin I complimented him, "You are so great for rescuing those dogs today. And I love those photos you took yesterday...."

After lunch we went to Stan's music store, The Melody Corner, in Kerrville, to pick up a hard shell case that I had ordered for my ukulele. Then we went to Hometown Crafts. While we were looking around the store Tony found something that made us laugh out loud when we saw it, so we bought one for Tony, because he loves Toby Keith's song, Red Solo Cup. 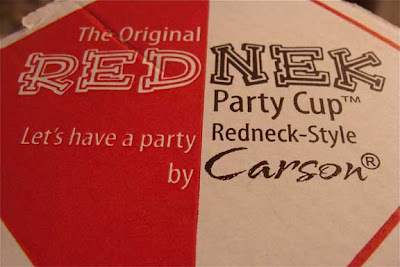 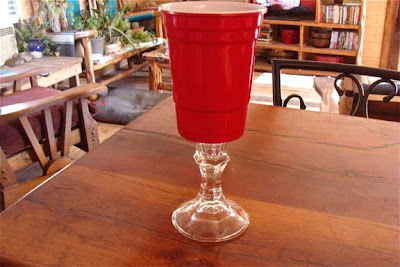 It's a porcelain redneck, red solo cup and after taking this picture of it, I think I might just need to get one too.

Late this afternoon I went over to The Lodge to see Kinky's sister Marcie. When Trigger and I pulled up, she was outside standing by her hammock. The Friedmans came running to greet me and then I went to see Marce. After howdies and hugs she told me that her hammock was all messed up, because the last time that she took it down, she didn't take the time to store it properly. So, because it was a mess and all strung out I decided to try to help her unravel the thing.

Thirty minutes later we had made some progress unraveling it, but the hammock's ropes were still not right. Then I heard Kermit in the distance. "I hope Tony comes over here, because he is great at these kind of things. He's unraveled so many things for me, like my pink fishing pole when the fishing line knots up and..."

When Tony arrived we both hollered, "Help!" Then I half hollered, "Tony, we need your help..." Two minutes later Tony had fixed Marcie's hammock for her, so she and I both complimented Tone on his skill of unraveling things. And that is about it for tonight.