"The Wild Blue Yonder!" or "He Was Completely Wrong!"

Yesterday was great. Around eight o'clock in the morning our good friend Ellen Cooper came out to help Tony with his chores, because Tone was going to take the rest of the day off to spend the day driving around the Hill Country with his sister Annie and our sister-in-law Stacie, because they are all shutterbugs and they wanted to go take pictures of the Bluebonnets.

Stacie arrived first, around eight-thirty, so I invited her inside for some coffee, since T. and Ellen weren't done with his chores and Annie hadn't arrived yet. During our fun conversation I told her about how much I loved this years CMA awards and how much I loved the new upcoming artist Eric Church. Since Stacie had missed the show that I had recorded, I showed her Eric Church's performance and Carrie Underwood and Steven Tyler's performance and then Ellen walked inside the trailer, carrying a small cardboard box with plants in it, and said, "Charlie and I have a gift for you from Big Bend and a carton of fresh eggs from our chickens." My eyes lit up when I looked at the beautiful plants! 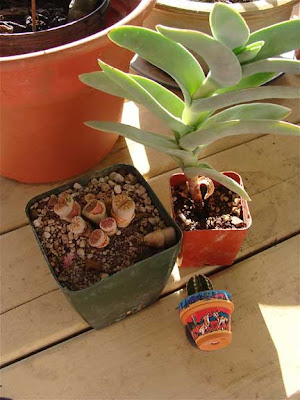 "This odd looking one is called a Lithrop and I can't remember what the succulent is called. And this little cactus in the pot, with the magnet attached, is for your refrigerator door and you only have to water it once a month." 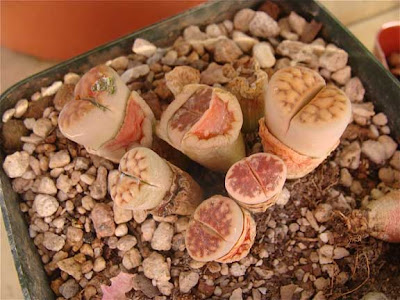 After I thanked her and asked her to please thank Charlie for the lovely plants, Stacie and I admired them and then the three of us watched Eric Church's performance, Carrie and Steven's performance, to catch Ellen up, and then we watched the duet with Zac Brown and James Taylor and it blew them out of the saddle, too!
Then our hen party began when we started talking about how cute we thought Eric was and what a heart throb Steven and Zac were and that's when Tony walked inside. "I wonder where Annie is?" Tony asked, as I started to replay Eric Church's performance on our television, so T. could watch it. "That guy's really good. I like him," Tony commented, as the three of us girls stared at the TV, trying not to drool. Then Annie arrived! And ten minutes later they took off for the wild blue yonder and Ellen went back home to Charlie.
An hour later after catching up with all of my paperwork, e-mails and phone calls I decided to take the day off too, because I couldn't wait to read more of, The Art of Racing In The Rain, by Garth Stein.
I took a break from reading, when I met Kinky for a late lunch in Kerrville and basically all we talked about was how much we were enjoying reading Garth's book. After our lunch I went to H-E-B to get a few more groceries and then Trigger took me home.
Tony and "the girls" arrived back at the ranch, halfway between four-thirty and five and they told me they had had a blast, even though there were no Bluebonnets to shoot. "We found one Bluebonnet," Tony said, "and we ate lunch at Wheeler's in Fredericksburg and the food was the best and you have got to tell Harley about it."

"Our good friends Randy & Lisa, who own The Save Inn Restaurant in Kerrville, recently purchased Wheeler's. I'm so glad that y'all ate there..." After Annie and Stacie took off for home I started reading, again and I didn't stop until I had finished the book, which I still can't quit thinking about today, because it is now one of my most favorite books in the whole wide world.

This morning after I walked six miles with Leslie I called Kinky, "I finished reading the book and I cannot say enough about it."

"Come on over, Nance. Let's talk about it," Kinky said. "I still have sixty pages to go, so please don't tell me how it ends." After a short, but fun visit with Kinky I came back home and went to work doing more paperwork, etc.

This afternoon while we ate lunch with Kinky we started talking about Stein's book again and then he tells me that he thinks he knows the outcome and how the book is going to end, but he doesn't want me to give him any clues or signs, as to whether he is right or wrong, because he wants the ending to be a surprise. After I agreed to be stone-faced about it—he told me his theory and I just stared blankly back at him, from across the table, with my face frozen like a statue, with no expression, and it was very hard for me to do—because he was completely wrong—just like I had been when I thought I had figured it out!

This evening Kinky called me and wanted to come over later tonight, after his Australian interviews, to have a picnic with our dogs. "Let's do it tomorrow, Kink," I said. "I need to write my blog tonight and you need to finish reading the book, so we can talk about it. I can't wait for you to finish it."

Y'all have a great evening and give your dogs a hug from me!

P.S. Tony has just started reading, The Art of Racing In The Rain!
Posted by cousin nancy at 7:37 PM

Hi Nancy, "Art of Racing In The Rain" is on my list of all time favorite dog books. The thoughts conveyed are the only way I have been able to deal with loss of my great friends. Love the blog--never know what to expect.
gerri

Hi, Gerri. Let's get together as soon as possible. I love this book and am so glad that Tony has started reading it.