Yesterday, Tony and I arrived at Wolfmueller's Books around one o'clock, because we were going to meet our dear friend Mari, of the NoMads, there, because she wanted to give me something that she had bought for me on one of her many road trips.

When we arrived at "The Coolest Bookstore in Texas" we were greeted by Mary Jo. After she told us that Sandy and Jon had left the building, we started visiting with Mary Jo and I am so glad that we did, because Mary Jo enlightened me about the aliens that showed up out here this past Saturday, while Tony was gone and I was trying to show Jim and Sean our dogs, before they decided to adopt Chloe.

"She's known as the %$#$@# and has been banned from Albertsons and the Super S and most of the stores in town, because she is so crazy acting," Mary Jo said. She's never come in here, but I've seen her dancing wildly up and down the streets and..." Then Mari comes walking into the bookstore—lugging a big, black, filled garbage bag behind her.

After greetings Mari opens up the bag and pulls out a big, furry, pink thing and then hands it to me and says, "Its a sheepskin and for your back. David uses one and it really helps. When we were buying his and I saw this pink one—I had to get it for you, so you won't blame me for laughing too much when we get together, and causing your back to ache." We all started laughing.

"Mari, I love it!" I said, as I showed it off to Mary Jo and Tone. "Thank you so much. I can't wait to use it..." Then Mari reaches into another sack and hands me a book, How To Raise a Jewish Dog: The Rabbis of the Boca Raton Theological Seminary as told to Ellis Weiner & Barbara Davilman.

"This book is for you and I hope that after you read it you will pass it on to Kinky, because I'm sure he will get a big kick out of reading it. It's a clever, hilarious book and was so much fun to read and the pictures in it are really cute, too..." 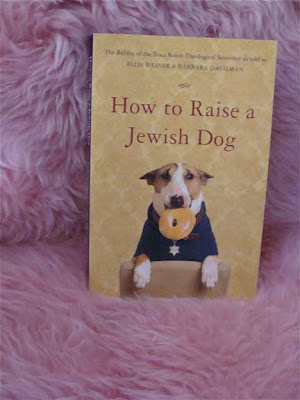 After I thanked Mari for it, as I was thumbing through it and said, "Mari, can Tony and I treat you to lunch?" Mari smiled. "Mary Jo just told us about a restaurant right around the corner on Water Street that has great tasting sandwiches, salads and soups. How does that sound?"

Five minutes later we were sitting in the Water Street Cafe reading their menu and then we placed our orders. I ordered a cup of Broccoli & Cheese soup and a Chicken Salad Plate, Mari ordered a hot Pizza Panini sandwich and T. ordered the Chicken Salad Plate with a cup of fruit on the side.

As we ate our delicious meals we laughed so much that I was wishing that I had brought the pink sheepskin along with me, because yes, my back started aching, but because I was having so much fun—I kept it a secret and just ate and laughed.

"My second favorite movie is, "Lady Hawke with that beautiful Friesian black stallion in the cathedral scene," Mari said. "Didn't you just love it, too! I looked at her and shook my head sideways.

"I'm sorry, but I've never heard of it." Then Mari starts telling us about it starring Michelle Pfeiffer and Matthew Broderick and the storyline and how much she knew that I would love it and then she told me that she would loan me her copy of it. Then the friendly waitress came to our table and asked us if we wanted desserts.

Even though I seldom rarely eat desserts, but because I was enjoying our fun lunch I said, "Let's eat desserts y'all. I'll have Death By Chocolate, please." Then Mari copies my order and then T. ordered a chocolate chip cookie.

"OMG!" I said, after taking my first bite of the dark cake. "This Death By Chocolate cake is the best that I have ever eaten! Can you believe it, Mari?" Mari nodded her head yes in agreement. Then I looked over at Tone and he looked so disappointed that he hadn't ordered the cake, too, as he nibbled away on his cookie. So, I took one more delicious bite of my cake and then I offered the rest to him, not because I'm a nice person, but because I was so full. His eyes immediately lit up and then he dug into the cake and ate it all. But he never thanked me for it, until I had reminded him of it—on our way home. "You're welcome Tone."

As soon as we got home, after putting Belle Starr-Simons outside to go potty, I put my beautiful, pink sheepskin in my chair and then sat down on it and my back pain rapidly went away. Thank you, Mari!

And the reason that I did not write a blog last night was because I watched, "Lady Hawke" instead—thanks to Netflix. And I loved the movie—especially the horse.

This morning I went over to the Lodge to visit with Kinky since he has been gone since last Wednesday and we had a fun visit. Before leaving his Lodge I told him about making my Cousin Nancy's Nopalitos Salad for lunch today and that I really wanted him to try it.

"Is it really your recipe?" Kinky asked, not sounding real excited.

"No. I stole it from Sandy and it is absolutely delicious."

"Okay, then bring me some and I'll try it. It is Sandy's recipe, right?" As Trigger took me back over to the rescue ranch I wondered why Kinky had been so concerned about whose recipe it was.

At eleven-forty-five the verdict came in on my cactus salad. Kinky loved Cousin Nancy's Nopalitos Salad! Thank you, very much.

P.S. Today after telling Eileen the full story about about my first encounter of the weird kind with %$#$@#, she sent me an e-mail and told me that she knew who %$#$@# was, because she too had had a close encounter with her, when %$#$@# suddenly jumped out into the street acting like a wild, crazy woman, causing Eileen to have to slam on her brakes to prevent her from running over her. And all that I can say about it, is its Full Moon Time.

FYI: I just received this comment on my blog from Sean and Jim and it has just made my day! Thank y'all!

"Chloe has turned out to be the perfect addition to our family. She is well-behaved and mindful, but she's also playful and silly. We took her to a leash-free dog park today and she played well with every other dog there. She's such a lover-dog, wanting to nuzzle under your arm or roll around on the floor and lick everything. I told you I knew she was the one as soon as she appeared on your website and I was not mistaken. It was total kismet. Thank you for making our visit such a treat, martians notwithstanding, and for knowing, as I did, it would be love at first sight."

Y'all have a great evening! And please pray that we get some much needed rain.
Posted by cousin nancy at 6:27 PM