What a day? This morning I overslept and missed The Royal Wedding and even though I thought it was a sign—I wasn't upset, because our DVR had recorded it.

By the time Tony returned from drinking coffee at the Old Timer, in Medina, I was caught up with my morning chores and cooking his breakfast. "Morning, T."

"Porky's dead," he said, flatly. "He was okay when I left for Medina and he must have died soon after. He was old, for a pig, Nance. I'm going to call Robert to see if he can come over with his backhoe and dig a big hole, because my back is out." As Tony talked about Porky Pig to our nice neighbor, Robert, I felt sad about Porky's passing, but was glad that he had passed peaceably. Porky Pig was a good pig.

After I had cleaned our breakfast dishes I went outside to thank Robert for helping us and found him on the giant piece of equipment digging a very wide, deep hole, as Frank and Tone stood by and watched, and Robert and Sherry's daughters played with Gilligan, our cute, little Dachshund mix.

Once Porky had been buried I took Brittany and Ashlie up to the trailer, so they could meet and play with Belle Starr-Simons. Needless to say, "Belle stole their hearts and she enjoyed playing with them."

As I was cleaning up our lunch dishes the phone rang—it was Jon Wolfmueller. "Hello, Nancy. We just found out that there is a fire up on Medina Mountain. Mary Jo just told us about it and that's all we know..." After I thanked Jon for calling to warn us about the fire I went outside and told T.

Before he left to go check out the fire on the mountain he called our neighbors / friends, Carol & James and Robert & Sherry to alert them about the fire. After Tony took off, I got on the computer to see if I could find out any news about the fire, but I found nothing, so I called the Kerrville Fire Department and was told that it was under control and that no one needed to evacuate—thank goodness. Then I called our neighbors back to update them.

Twenty minutes later, while I was outside, once again applauding, B.S.-S. for "going potty" Tone drove up in Trigger with Eileen right behind him in her red car. "The fire is small and under control," Tony said, before we greeted Eileen and then quickly filled her in on the fire-scare. Then we went into Outer Space. "This is the IQ test for dogs," Eileen said, as she handed me the box. "My sister Dean sent this to me, so I could test Callie Dean's IQ. And I think it is really cool." 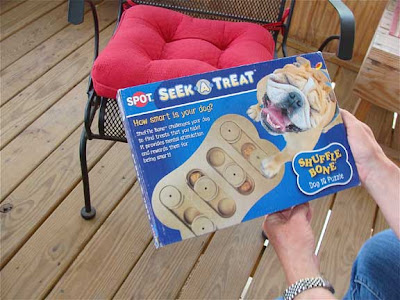 "You put small treats in the holes and then slide the covers over them and see if Ms. Belle can figure out how to get the treats out by sliding the covers." I immediately went into the trailer to get my camera and some dog treats for Belle Starr-Simons' IQ experiment, and I must admit that I was a little bit nervous about how well she would do. After Eileen helped me hide the treats under the covers we set it down on the floor and waited for Belle to discover it and prove to the world that she is a genius. 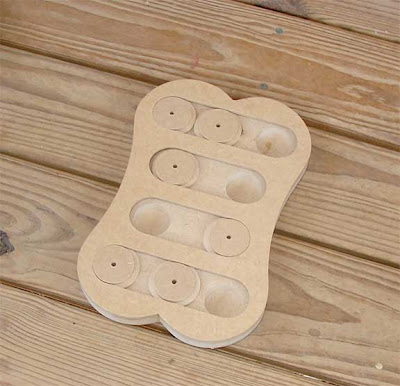 After waiting for over a minute we showed Belle the treats and then we slid the covers over them and held our breaths. Nothing happened! And when Eileen and I looked at T., we could tell that he was crushed that his dog wasn't "the brightest planet in Outer Space." Then the "IQ Miracle" happened! Belle went to the doggie IQ box and started sliding the covers to retrieve her treats. 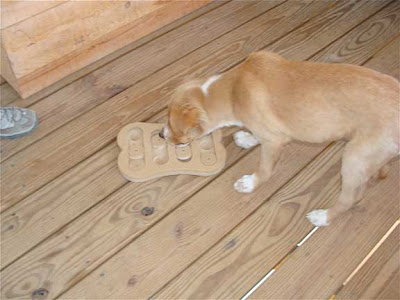 Tony was thrilled and he sort of puffed up, like a proud father, as Eileen and I cheered her on. "She's a genius," Eileen declared. "Look at her go!" After Belle had proved to us that she was a "G.P." (Genius Pup) she tried to help T. reload the IQ box for her encore performance as Hank and Toto disgustedly, stood by and watched." 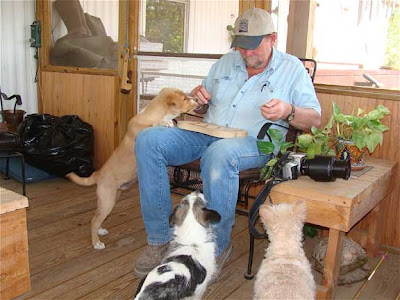 B.S.-S.'s belly was so full, after her final encore IQ performance, she looked like she had eaten a small planet and that's when Eileen told us that she really needed to get home. T. and I didn't want her to leave, so we tried to talk her out of it, but it didn't work, because Eileen left ten minutes later.
As I type this Belle-Belle is sleeping next to my chair and I need to wake her up now, so she can go outside to "go potty." Thank you, Eileen, for making my day and for making Tone's day too, by proving that his dog Belle is a "P.P." (Pup Prodigy).
Y'all have a great evening and please pray for rain for us!
Posted by cousin nancy at 7:21 PM

Godspeed Porky Pig! You had a great life in Texas and I wish you well on the next leg of your journey xo