I Am In Charge!

Tonight as I begin to type this, Tony's dog, Belle Starr-Simons, is sitting beside my chair trying to chew on the bottom cuff of my Levi 501s. I just corrected her by softly saying, "No Belle," so she is now barking at me—to let me know that she doesn't appreciate being reprimanded by me, because she is Tony's dog and what I have to say doesn't count in her world. Tone is her hero and to her Tony Rules.

I have to admit that Belle-Belle is a precious pup, even though T. is spoiling her rotten, which is actually okay with me, because I love her too. Even though Hank, Toto and Little Girl, our old assisted living dogs wish that she would just leave them alone and not want to play with them and some how magically disappear for good. But, unfortunately for them—that is not going to happen.

Yes, tonight I am babysitting Ms. B. so Mr. T. can take wild life pictures, on the ranch, with Frank. So since I am in charge I just gave Belle an ice cube to chew on and put her outside to "go potty" and then tear up anything that she can find in our front yard. So, I must type fast.

Today has been great, again. This morning after I walked six miles with Leslie, I cleaned up and then went outside to greet "The Best Volunteers in Texas." First, I found June happily wrestling with Rufus and Roxanne in their pen, as she put leashes on the excited dogs, who could not wait to go for a walk with her. As Rufus and Roxanne joyously criss-crossed and circled around June, tangling up their leashes, we laughed about it and I had a fun, but too short of a visit with her, because the Ruf & Rox could not wait to go walking with her.

Next I found June's eighty-nine-year-old, uncle Barney, who doesn't look a day older than me, sitting inside Ruth Buzzi's and Chuck's pen patiently grooming them and they looked fabulous and seemed to be really enjoying Barney's attention. After another fun, but short visit with him, Lisa and Eileen came walking in to return La Toya & Maggie to their pen, so I took off to go greet them and to thank them also for coming out to walk our dogs.

After howdies and hugs I showed Eileen and Lisa—Enzo Swift and they thought he was a beautiful dog and then we started talking non-stop about how much we had loved reading The Art of Racing In The Rain. By the end of our book review we had all agreed that we despised "The Twins." Then they took off to walk more dogs.

This afternoon after lunch Trigger took T. and me to Kerrville to run a few errands. After going to the Post Office we went to Wolfmueller's Books so I could pick up my two books of The Art of Racing In The Rain, that I had asked them to order for me.

When we arrived at Sandy's and Jon's bookstore Mary Jo greeted us from behind the front counter and then Jon walked up to greet us. "Hi, Tony and Nancy. Sandy isn't here right now. What are y'all up to?" After we told him that we were running errands, he said, "I've just started reading The Art of Racing In The Rain and I really like it. Especially the part about when Enzo..."

After we talked about my favorite book Tony says, "Jon, do y'all have a copy of Mapsco's The Roads of Texas?"

"There's a copy right behind you and it is their latest edition and filled with over 12,000 updates. It's the best," Jon said, as Tony turned around and plucked it from the shelf. Then we started talking about its great detailed maps. 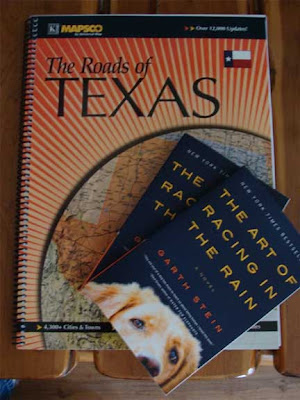 As Tone and I were paying for our books I said, "Jon, I want to figure out how far 1,825 miles is from Medina, that I walked last year with Leslie. Like from Medina to the north, the south, the west and the east." Jon thought it would be interesting to know and he suggested that I Google it, so I did after we came home and before I started babysitting Belle. Who is right now sleeping on the floor, beside my chair with her Mr. Fluffy stuffed toy.

Tony has just returned and Belle is thrilled to see him and so am I, because I'm now done babysitting his dog. I'm fixin' to watch a movie.

Y'all have a great evening! And thank you, Eileen, Lisa, June and Barney!

Cousin Nancy,
This is Mary-Ann. My forever family couldn't find an email for you so we decided I could write to you this way. I want you to know I am doing great. Haley loves me so much and I love her. I whine whenever she leaves the room we are in. I slept with her for a few nights, but now I sleep with Lily (a BIG Labradoodle). The other dogs have been nice to me. My forever family discovered I can climb fences, but they fixed it so I can't get out now. I went back to the doctor and got my stiches out and they put me in some yucky stuff, but the spot above my eye is getting better. I go back in two weeks. I still miss Gilligan. I hope he is doing okay. Thank you for taking me in until Haley could find me. I am getting the routine down here and life is pretty good. (I am so spoiled)
Mary-Ann

Hi, Mary-Ann! I am thrilled to hear that life is good! You are a very lucky dog and never forget it. Hugs to you and your new fantastic forever family.