Yesterday was a great day, because our great volunteers, Eileen Gotke came out to walk our dogs and Sharon Griswold, the dog whisper and owner of "Rover Misbehaving?" came out! And I am proud to report that Annie Oakley, with the help of Eileen working with Sharon—Annie is a much improved dog.
Thank you, Sharon and Eileen! We love y'all!

Today has been great, too, but tonight's post has to be short because of our very special and important house guest.

This morning I went over to the Lodge and had a fun visit with Kinky and The Friedmans. And rumor has it, from a very good source (me) that "my girlfriend," Sophie, is fixin' to get a new "hairdo" next week. And remember you heard it here first.

Around one-thirty today the dogs started barking outside, so Tony and I went outside to see who it was. Within seconds we were shaking hands with David, the nice man, who had adopted our Nellybelle, a while back, and his dear friend Chelsea. "We're here to adopt a dog," David said. So we took off walking, to show them our dogs, as David bragged about what a great dog Nellybelle was and how smart she was, which made us so happy for her. "She's the smartest, sweetest dog that I have ever had and..."

An hour later we had an adoption! Chelsea adopted Belle Starr's playmate, Harry Reasoner, and Harry could not have been happier about finding his new forever home, but poor Ms. Belle Starr whimpered and cried like a baby, when Harry left their dog pen. Here is a picture that I took of happy Harry Reasoner with Chelsea. 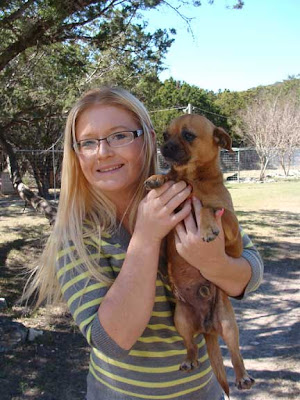 Right after they left with Harry, Tony and I had a quick discussion about who we should put with Belle. Minutes later we introduced Belle to Pilgrim and they liked each other, but in my opinion,  Pilgrim played a little too rough with her, because he was so much bigger. Here is a picture of Pilgrim and Belle playing with Tone. 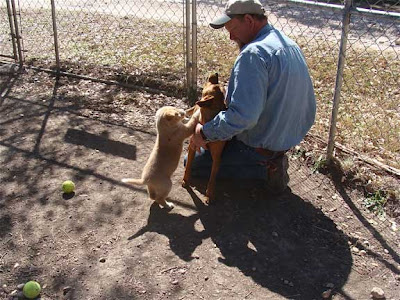 An hour later, after watching them closely, Tony returned Pilgrim to his pen and we took Belle up to our trailer, so she could spend the night with us, because we think that she is too young to be outside by herself. And, here is a picture of Ms. Starr in our front yard after meeting our old "assisted living" dogs. 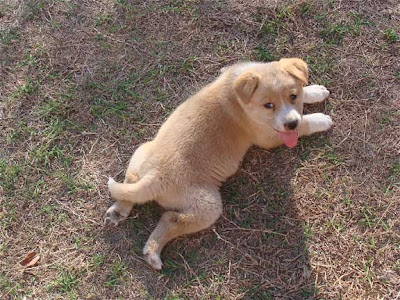 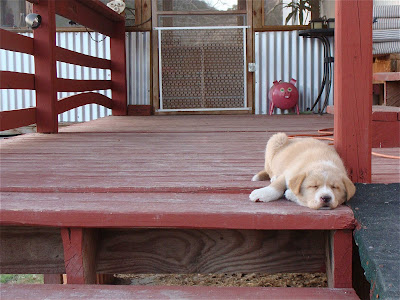 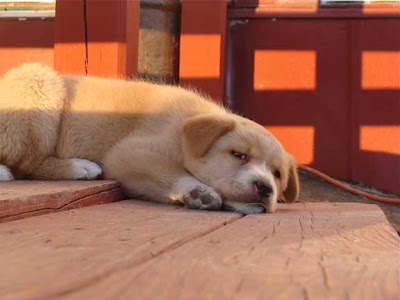 Early this evening Frank Mason, Kinky's friend and The Friedman's official babysitter, came over to visit with us and his big heart melted as he played with Belle inside the trailer. T. took this picture of Frank and Belle. 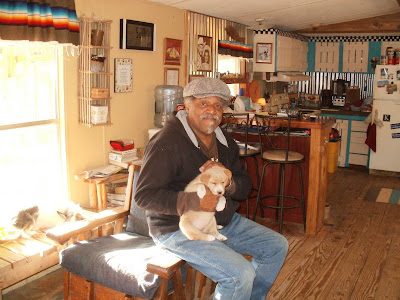 And here is picture of Belle Starr, that I took, of her taking a nap under a chair. 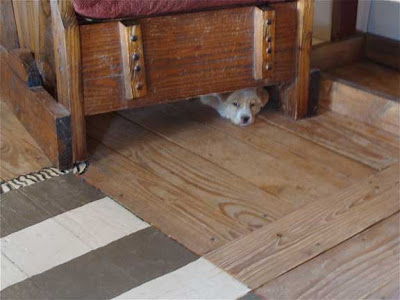 Before Frank left, I went out to my writing cabin and grabbed one of my favorite stuffed dog toys for her to keep her company tonight in her crate, while Tone carried a large dog crate into the trailer, so she could sleep in it tonight, because our house is not "puppy-proofed." 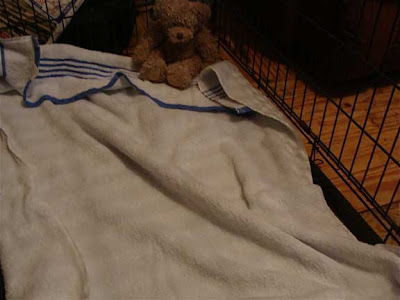 The reason tonight's post is short is because Tony volunteered to "babysit" Belle while I wrote this tonight and it is now my turn to "babysit" her. Here is a picture that I just took of her—sound asleep, as I type these final words. Isn't she adorable! If you know anyone who is looking for a smart pup please tell them to call us. 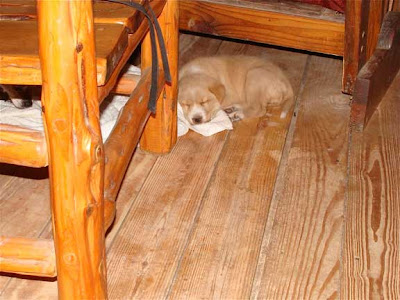 Y'all have a great evening!
Posted by cousin nancy at 8:48 PM

I must say a big thanks for my new sweetheart! He is just a joy I'm so glad I decided to take a trip and meet you both. We have decided to change his name to the fabulous mr. Louie. I have posted a photo of the sweet baby girl on my facebook page in hopes someone will step up and give her a wonderful home. Thank you for all you do for mans best friend:) I look forward to working with you both in the future. Thanks again!!!!