Imus In The Morning!

Today has been great. Tony woke me up real early this morning, so I would be wide awake, in time to do The Harley Show, at seven forty-five, on The Rose 99.9 FM radio station.

Harley's show was a lot of fun and his Pet Of The Week was Lily, our sweet Catahoula mix and I told him all about her, "Harley, she is sweet and a really smart dog. And she gets along great with other dogs and kids. In other words, she is one great dog..." 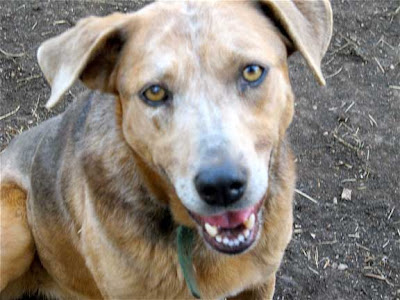 After Tony and I ate lunch today, he took our Maudie to Kerrville, to get her checked out at Hoegemeyer Animal Clinic, because she has started having fainting spells. I stayed home, because earlier this week, some people had made an appointment to come out to look at our dogs and possibly adopt one, so their dog would have a companion.
Around one-thirty Mama started barking outside, to let me know we had company, so I went outside to greet the people pulling up, in a Subaru. As soon as I met Bill and Phyllis and their big dog Maggie—I was impressed with them and liked them.
After they told me that they wanted a female dog I gave them a tour and introduced them to all of our females. When they picked the one they liked most, we took the dogs for a walk down to the creek and the dogs got along beautifully!
When we returned to the rescue ranch, Tony was back, but Maude wasn't, because Dr. Janssen wanted to keep her over night, so he could run some tests on her. After I introduced Bill and Phyllis to Tony we took the dogs into my cabin's front yard and unleashed them, to see how they would get along and they got along great.
Forty minutes later, after they had signed off on the adoption papers, they loaded the dogs into the back of their car and happily drove away and Tony and I were thrilled that another one of our great dogs had found a fantastic forever home. This is who they adopted.

Yes, it was Lily! Harley's Pet Of The Week today! And she is going to live on an island in Canada during the summer months, and do a lot of swimming up there with her new best friend Maggie, and then she'll spend the rest of her time on a lovely ranch, in the beautiful Texas Hill Country! Needless to say, it made our day.
This evening around five-fifteen Ben Stiller was returned to us, because he wasn't working out, but I am fine about it, because the minute that Tony reunited him with his girlfriend Gracie, who also came back to us, two days ago—they put instant smiles on our faces, because they were so happy to be back together, again.
FYI: Kinky is going to be doing Imus In The Morning, at 5:30 Central Time, tomorrow morning. And tomorrow my dear friend Shirley, from Houston, is coming out for a visit, so we can catch up with each others news. And, I know for a fact that Eileen, one of our great dog walking volunteers is also coming out tomorrow, too! So Friday's forecast is looking good for another great day.
Y'all have a great evening!
Posted by cousin nancy at 8:27 PM