Last night was really rough and it wasn't Belle Starr's fault at all. In fact, she was fantastic all last night. She never cried in her crate or had an accident and she slept like a baby.

The trouble started last night, around eight o'clock, when I made some popcorn for us to eat. Toto, who has a Napoleon complex, started growling at Mama and Abbie, so I put "the girls" outside, so we could eat our popcorn in peace and that made Toto happy.

Thirty minutes later, after cleaning up the kitchen, I went to the front door to let Mama and Abbie come back inside, but they weren't there and then I noticed that the front gate was wide open—Mama had opened the gate, again.

So, Tony and I drove all over the ranch, for over an hour, looking for them, but to no avail. Before going to bed we stood on our front porch hollering for them and right before we came inside I said, "T. I see eyes over there by the cabin. Look." And sure enough, it was Abbie and she came inside our trailer, like Tone had told her to do.

Of course, I didn't sleep very well last night, because I was so worried about Mama. At one-thirty, two -thirty and three-thirty, in the morning, I got out of bed and went to the front door to look and call for Mama, hoping that she had returned home.

At four-thirty my luck changed, when I saw her standing on the front porch. "Mama! Come on inside." Then I smelled a strong scent of a skunk—Mama had been skunked and she stunk to high heaven! Because I was so glad to see her, I told her to come on to bed and she slept like a baby on our bed until T. woke up at five-thirty.

"Good grief, Mama! You've been skunked," Tony grumbled, in the dark. "You need to go outside right now. Come on girl. Come on Abbie."

I climbed out of bed right after dawn, before Tone had taken off for the Old Timer. After I told him about Mama finally coming home at four-thirty we talked about our stinking bedroom and the big room smelling like skunk and then we talked about Belle sleeping throughout the night without a whimper. Then T. took off to go drink some coffee with his friends in Medina.

After feeding all of our dogs, I got on my laptop and searched the Internet to find ways to de-skunk Mama and our trailer. Twenty minutes later, I picked up the phone and punched in the Old Timer's phone number. "Hello, this is Nancy. Can I speak to Tony please?" Seconds later after greetings I said, "Tony, I found a recipe to de-skunk Mama! Please buy two bottles of Hydrogen Peroxide. Thanks. Bye."

Two minutes later after writing down the recipe I called the Old Timer, again. "Hello, this is Nancy again. Would you please ask Tony to also get two boxes of baking soda?"

After we ate breakfast Tony looked out the front window and said, "Nance, you've got to come see this." I looked out the window and across the creek from us were six, gigantic, mama, wild hogs, moving across the pasture, with about twenty-five to thirty, of their little, wild piglets. "Tony, do you realize that Mama could have been killed last night if she had run into that herd of wild hogs? Those protective mama's would have killed Mama for sure!"

"Thank goodness she only met a skunk last night and..." After Tony went outside to do his chores I started trying to de-skunk our trailer by washing all of our linens on our bed, while burning several sticks of incense in every room. After the sticks had burned completely out I went over to the Lodge with Belle, because Kinky wanted to meet her.

"Nance, she's beautiful and absolutely precious," Kinky said, as he stroked her. "Hi, Belle Starr..." By the time we reached the door of the Lodge, Belle had also met The Friedmans, who were all very nice to her. Thirty minutes later, after a fun visit, and after Belle had left a gift for Kinky on his expensive Persian rug, Trigger took us back over to the rescue ranch.

As we drove in, I saw three people walking around and none of them were Tony. Then I saw T. and stopped Trigger, to ask him who was out here, since we are closed on Sundays. "They want to adopt Pilgrim," Tony said. "They are Chelsea's cousins. She told them all about Pilgrim and she had them read your column in "Texas Animal Imprints" about Pilgrim and Pumpkin. They seem like really nice people, too. You're going to like them. And they told me that Harry is happy and he is doing great."

Before Trigger, Belle and I reached the trailer, I stopped and visited with the cousins and I was very impressed with them, to say the least, and I was also very excited that they were adopting Pilgrim. After Joshua signed-off on the adoption papers, I took this picture of Joshua with Pilgrim before they took him to his new forever home. 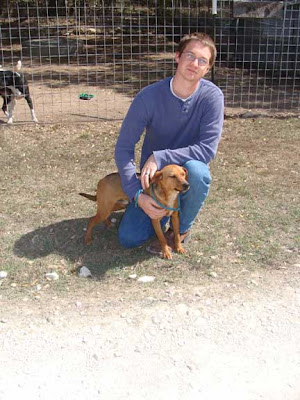 Before heading to Kerrville to meet Matt and his parents, Gail and Paul, and Lisa for lunch, I took this pictures of Belle Starr sleeping under my chair at the kitchen table. 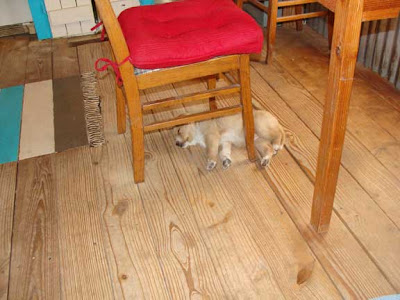 Lunch with Matt, Lisa, Gail & Paul was a total blast for Tony and me and it was filled with non-stop laughter, as we caught up with each other's latest, good news. In fact, I noticed that people and the waitresses were staring at us, because we were laughing and having so much fun. I wish that y'all could have been there, because I love these people.
Then the funniest thing happened. Lisa, who I was sitting next to says, "Oh no. That had avocado in it and I am allergic to avocados. They make my lips swell up." And then she started nervously rubbing her lips to see if they were swelling. "Oh, I hate this. I can already feel them swelling. I am so embarrassed, you guys. Are they big?" I looked over at Lisa for a "lip check."
"OMG, Lisa!" I said, trying to sound serious. "They're the size of truck tires. They are so big that I know the Rolling Stones would want you to tour with them." Everyone started laughing.
Then Paul quickly adds, "They are so big, Lisa, that I bet in an hour they will temporarily blind you." Then there was another out burst of laughter at our table and then we all reassured Lisa that her lips looked just fine and not to worry.
After our super fun lunch with our great friends, T. and I went to H-E-B and speed-shopped, so we could get back home and give Mama a bath, in the backyard, to help de-skunk her. And needless to say, Mama was not a "happy camper" about it. 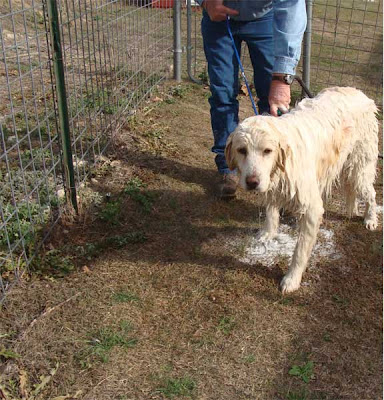 After washing her twice with some de-skunking shampoo we left her to dry and came inside the trailer to  play with Belle and to give her the new toys that we had bought for her and she loved them. 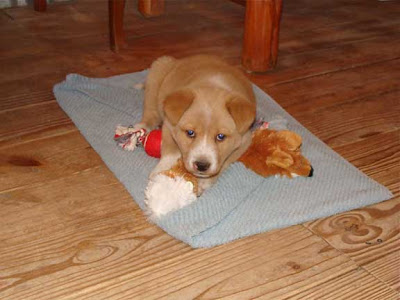 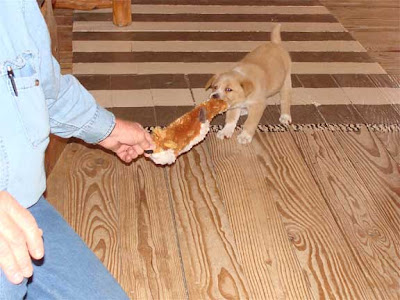 After we had worn out Belle, she took a nap in the kitchen. Then I lit some more sticks of incense, while Tony sprayed "doggie perfume" on all of our dogs, while I remade our bed. 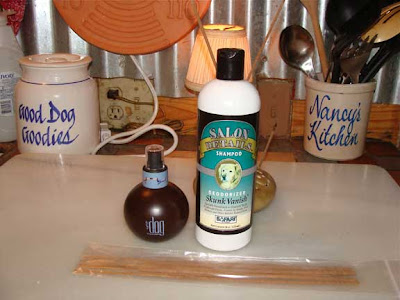 This evening when we brought Mama and Abbie inside for the night, she still smells some, but not nearly as bad as she did last night. Instead of "Genuine Skunk-Smell," it was more like "Eau de Toilet." Tomorrow I plan to give Mama another de-skunking bath and trim her hair a little, so I can remove the many new stickers and burrs, that she collected on her wild "girls not out" last night.
Y'all have a great evening! And May the Dog of Your Choice Bless You and Never Get Skunked!
Posted by cousin nancy at 9:00 PM

Hey, Nancy!
Great pics of Belle. I was wondering if I could come by and meet her on Wednesday...?
Also: I know you & Tony know how to work with wood. I've got a bunch of cedar limbs that I want to make some gates with, but have no idea what to do. First, I need finish removing the bark: the cats have been a great help on this task, as I lined them up to dry in the sun (the posts, not the cats),
& they've been using them to scratch on. What tool should I use?
Thanks!
Yer Medina neighbor, Ronnie