Yesterday was great even though Belle, Tony's dog, had several potty-training accidents. Seven times, while T. was outside doing his morning chores while I was babysitting his dog inside—Belle would wet her towel on the floor, that she sleeps on. Each time during this two-hour long time period, I'd say, "No Belle," while carrying her outside and putting her down on the grass and repeatedly said,"You go potty out here."Then I would come back inside and replace the soiled towel with a fresh, new towel for her to sleep on.

When T. came inside, I was loading the seven towels into Queen Bee to wash them. "How did Belle do?" Tony asked, as he held his little girl in his arms. I laughed and then started the washing machine.

"Belle was great, Tone. In fact, she has just won the "No Belle Pees Prize" this morning, for wetting seven bath towels. I'm washing them now." Tony started laughing and Belle happily wagged her white-tipped tail.

After lunch I went over to the Lodge to visit with Kinky. While we were outside, sitting in the rocking chairs on the porch, while watching the Hummingbirds, Kinky told me that he had decided to sell his pool table and give the proceeds to the rescue ranch.

So, if you are interested in buying Kinky's pool table, go to kinkyfriedman.com or Kinky Friedman on Facebook or give me a call at the rescue ranch. And please make note that the buyer is responsible for disassembling it and moving it.

Around two-thirty yesterday afternoon, Tony came inside the trailer and said, "Wilma Flintstone just got adopted to a really nice famiy!" As I prepared Wilma's adoption papers, T. told me that the woman's husband had heard about Wilma, when I talked about her on "The Harley Show" last Thursday.

After meeting the nice family and signing off on the adoption form we went to Wilma's pen. Here are a couple of pictures that I took of Tony bringing Wilma out of her pen and Wilma posing with her new family. 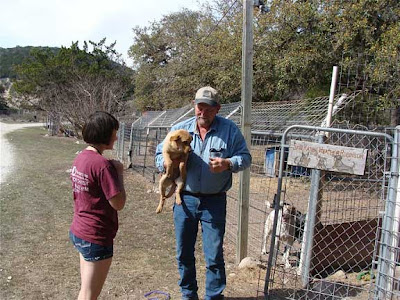 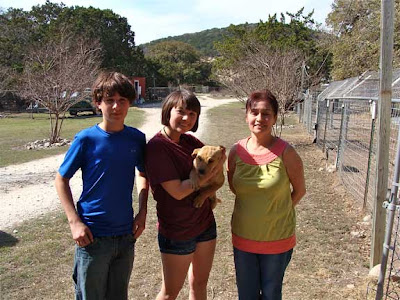 After Wilma jetted away Tone and I went inside her old pen and played with Fred Flintstone and Betty Rubble for a little while. Then we came back to the trailer and I called Kinky to tell him the good news about Wilma. To say the least, he was thrilled.
Around four o'clock we went over to see Carol and James and to check out their new riding arena that James built with Carol's help and it was totally awesome! They have been working on it for several months and it is nearly completed.
While we were over there, Carol's new cutting horse, Dude, came inside the arena to check out the new sandy ground cover, so I turned on my camera and shot this short video, Dude's New Arena! After our fun visit with them we came home and I spent last night working on Dude's video and setting all of our clocks forward, instead of posting a blog.
This morning I woke up at eight-fifteen, which would have been seven-fifteen yesterday morning and needless to say—I was not a happy camper. But, this year I have decided not to complain about it like I have in the past years, so with that being said—I am going to go take a nap and then go outside and work on my Space Ship.
Y'all have a great day!
Posted by cousin nancy at 12:33 AM