Yesterday was a great day. Around ten o'clock, our good friends Desiree and David called, because someone had dumped off three, three month old puppies at their bed & breakfast, the Trails End Guesthouse and they needed our help.

After talking with Desiree, I went outside and found Tony, in Buffalo and Tom Landry's pen. "Tone, we just rescued three pups from David and Desiree.... and I asked them to drop them off at Hoegemeyers for us."

Tony kept shoveling and said, "Okay. Have you called Hoegemeyers to tell them they are coming in?"

"Yes, they already know." I stayed outside and visited with T. as he finished cleaning the last two pens and then we came inside so I could fix lunch for us.

After lunch I spent my afternoon returning phone calls and e-mails and taking care of some paperwork.

At twenty-five minutes past six o'clock, I decided to try to compose some music for my upcoming video, using my Garage Band software and I had a blast. I could not believe how easy it was to lay down tracks and mix the music.

Six minutes later Carol & James came over for a visit and to meet Belle Starr. As Carol held Belle in her arms and cooed to her, I played my composition for them and they said they liked it and couldn't believe that I had done it in only five minutes and I couldn't either.

We had so much fun with Carol & James, because they love to laugh and are such upbeat people to be around. When we went inside the Space Ship to show them the progress I had made, Carol was still cradling Belle in her arms, as Belle slept peacefully. After complimenting my Space Ship, they started telling us some of the funniest stories about their latest adventure to Arizona. And we were all laughing so hard, I could not believe little Belle slept through it all. Near dark, Carol handed Belle over to Tony and we "adiosed" each other and then they drove away.

This morning, unexpectedly, Belle found her forever home and we are so happy for her! At ten minutes till nine, I was back in Tony's office talking to him about Maude needing another heart worm treatment today and us needing to pick up the pups at Hoegemeyers. "Maybe, one of the pups could be Belle's pen mate, Tone?" Tony shook his head.

"No, Nance. I want to adopt Belle," he said, as he sat in his chair, with her sleeping soundly beside him. "I need a dog and she's a great one. Ever since Blue died I've missed not having my own dog. Is that okay with you?"

"OMG, Tony! I love it. I love Belle, too and I am so glad that you want her to be your dog. Just think you can train her and take her to the Old Timer with you in the mornings and..."

"I know." Then Belle woke up and T. took her immediately outside for a "potty check." As I watched from inside, she quickly watered the grass and then Tony threw balls for her to fetch. Fifteen minutes later they came inside. "I've already taught her how to sit, Nance! Watch. Sit, Belle." Belle looked up at T., wagged her tail and then she sat down. "Good sit, Belle. Good, sit."

After lunch, Buttermilk took Maude and us to Hoegemeyers and Maudie slept the whole way, while Tony and I tried to come up with names for the three pups. Just before we hit the Kerrville city limits Tony says, "How about Fred, Wilma and Betty?"

When we walked inside Hoegemeyer Animal Clinic, Susan looked up from behind the counter and I said, "Fred, Wilma and Betty!" Susan smiled and chuckled and told us they were good names, before she took Maude back to the kennels.

A minute later Susan and a vet-tech came out carrying Fred, Wilma and Betty in their arms and helped Tony load them into the crate. Then we headed back to the ranch.

While T. put them into their pen, I went to get my camera, so  I could take pictures of them. Meet the Flintstones and Barney's wife! 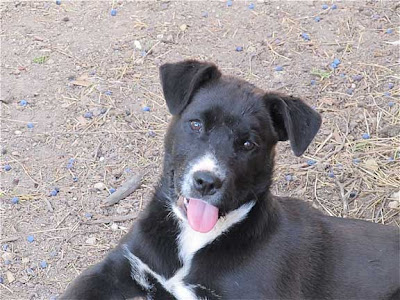 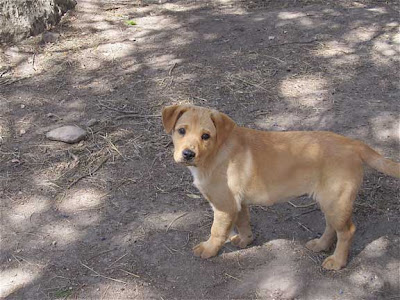 Betty Rubble (I love her smile) These three dogs are the sweetest, well behaved puppies and like Tony said, "They are almost as smart as my Belle is and Eileen's Callie Dean."

Tomorrow Mama, because she still stinks to high heaven, is getting her summer cut, a little bit early at Hoegemeyers, when we go to pick up Maude.

Y'all have a great evening!
Posted by cousin nancy at 7:27 PM

Congratulations to Tony and Belle! I'll now go take Belle's picture and info off my FB! I'm so glad I'll get to see little Belle go up!

great great news for Belle and y'all. !!!