A Bird In Hand! or Big Bird! or Weather Report!

Today has been great, even though I got up thirty minutes before the crack-of-dawn, so I could take care of all of my chores, before our good friend Rick Mender, our trusted air conditioning man and professional photographer, came out to repair our central air conditioning system. But before I tell you about today, let me tell you about last night.

Yesterday, around six-thirty the phone rang—it was Kinky, "Nance, do y'all have any Liquid Plumber or Drano?"

My answer was short, "No." After a short visit about his kitchen sink being stopped up, we adios-ed each other. And then I called him right back. "Kinky, I have a proven method to unstop your sink. Can I come over?" As soon as he told me to come on over, I grabbed our plunger and was over at the Lodge in less than two minutes.

After I told Kinky how I unclog sinks, we put our personal-plungers into the two sink drains—started plunging at the same time, as he counted, "Plunge. Plunge. Plunge..." When we finally stopped plunging, we removed our plungers and sadly stared into his kitchen sink, as a small amount of water slowly drained away.

Fifteen minutes later, after several more synchronized plunging attempts—we gave up and laughed about my so called, proven method that obviously had not worked. Before heading back home I suggested that Tony pick up some Liquid Plumber in the morning, when he goes to the Old Timer. "He usually gets home around eight-thirty, and then we will come over and fix it." Kinky liked my idea.

At eight-thirty this morning, while I was finishing cooking T.'s breakfast, Kinky called, "Nance, where is Tony? Did he forget to buy the Liquid Plumber?"

"He should be here any minute, Kink and I am sure that he won't forget the Liquid Plumber. As soon as he gets here we'll come over there." Eight minutes later Tony walked inside the trailer carrying a brown paper sack.

"They didn't have any Liquid Plumber or Drano, Nance. They highly recommended that we use this acid stuff, but warned me not to let it get on my skin, because it can burn your skin and I don't want you getting near it. As soon as I eat breakfast I will go over to the Lodge and you can stay here, because Rick should be arriving any minute." Then he ate his breakfast and I drank mine and then Rick arrived. After howdies, hugs and handshakes—T. jumped into Kermit and they took off for the Lodge.

Rick and I visited, outside in the backyard, as he replaced a broken capacitor on our air conditioning unit. Then June, our good friend and super volunteer arrived. Ten minutes later Tone and Kermit returned to the rescue ranch and Tony went to do his morning chores.

Around eleven o'clock Rick took off for Medina with our air conditioner's coil, so he could pressure wash it at the car wash, so I went outside to visit with June and to thank her for coming out. As always we had a fun visit and it was filled with laughter and then I went to talk to Tone, who was cleaning Mr. Rogers and Miss Dee's pen.

When he was done we jumped into Kermit and came up to the trailer, so we could return a few phone calls. After we washed our hands in the kitchen sink, at the same time—Tony went back outside to finish cleaning the last three dog pens, so I went into Outer Space and watered my flowers and then I picked up the dog poop in our front yard.

And, little did I know, that when I came back inside the trailer—I would be scared nearly-half-to-death—when I started washing my hands in our kitchen sink. As I was washing my hands. the soap bar slipped out of my hands and fell into the dishwater, so when I leaned forward to fish it out—a giant bird started flapping its wings wildly at me—and it was less than six inches from my face! Needless to say I was terrified, so I ran out of our trailer and screamed, "Tony!" But he did not respond, so I skipped down to Blackie's and Alfie's pen where he was cleaning their pen and found June, who was next door, in Honey's and Baxter's pen giving them treats.

"Tony!" I half-hollered. "There is a giant bird inside our trailer!" Then I looked at June and said, "A giant bird just scared me to death. It must have come in through the opened window on our porch and it was sitting on our windowsill and when I was washing my hands it started flapping its wings wildly and..." Then Tony and I jumped in Kermit and he took us up to the trailer.

When we came inside I immediately turned off our ceiling fan and then I said, "T. before you remove it I want to take a picture of it. It is hiding next to my Buddhadog. Look." Tone looked and then I shot it. 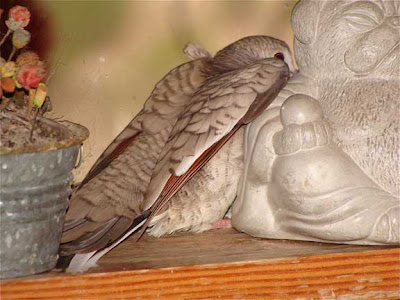 Then Tony walked over to it and gently picked it up. "Nance, it's not giant. It's just a Inca Dove."
As I stared at it in T.'s gloves—I said, "A bird in hand is worth something, but I forget, so I shot it again. 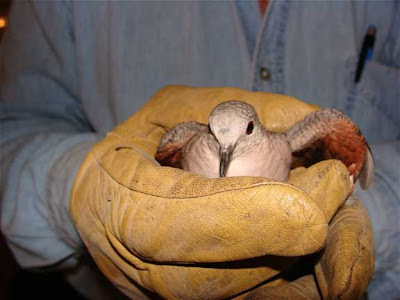 "That's the biggest Inca Dove that I've ever seen, Tony" I said, as he started to carry it outside and then he or she Inca got away from him and flew directly into our glass front door and fell to the floor! Tony ran to the door and carefully picked up the stunned bird and then we went outside to the porch where he sat the giant Inca Dove down on the railing and then it happily flew away—unhurt!
After the big bird had, so to speak, flown-the-coop-de-trailer, Tony started teasing me, as Kermit took us to go find June. After I told her all about Tony being a hero and a bird's best friend—we laughed and started joking about what the Inca Dove might tell its bird friends. "It was horrible! I found myself inside this old, single-wide trailer with loud music playing, "Bird Land" by Weather Report, while this furry, extremely dangerous, gigantic, four-legged creature slept peaceably on the porch and..." 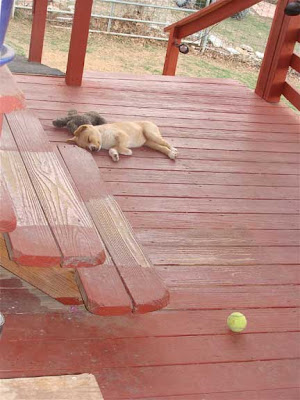 When Rick returned with our pressure washed, super-cleaned coil, he installed it as he and Tony talked about photography, cameras and lenses and I found it to be very interesting, even though their conversation went way over my head. When Rick told us about his photography web site: rickmender.com I went to my computer and checked it out and I hope that you will too, because if you need a great photographer—Rick is it. "Rick, your site is awesome and I love your pictures. I am going to blog about it tonight and..." And then I told Rick about our "early bird visit" and showed him the remaining feathers left next to my Buddhadog and he seemed to be really impressed, so I gave him a little feather. 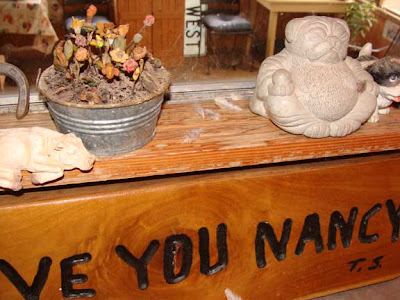 Tonight I am proud to say that, because of Rick, our old air conditioner, "Blowing In The Wind," is once again working beautifully, and I want to thank him and June for their caring, kindness and generosity towards us and our rescue ranch, and I also want to thank Tony for de-doving or de-Inca-nizing our trailer, and for saving the life of a beautiful, giant Inca Dove. Y'all have made my day great!
But there is still more to tell about my great day, but unfortunately, I have to go to bed now, because I got up so early this morning, and also because this blog post is starting to look more like a book than a blog. Tomorrow I will tell y'all all about our fun and fascinating, late afternoon visit with Joni Daniels, the editor of "Texas Animal Imprints" magazine and her friend and now ours, Tena Rae Helms and Hope, her darling brown colored Cocker Spaniel.
Y'all have a great evening!
Posted by cousin nancy at 8:37 PM

A bar sink may be for cipher more than rinsing little glasses, totally the fashion up to being utilised to clean dishes and pots. It can also exist required to do anything in between those things.