Yesterday was a blast, even though it was a bit crazy! At one o’clock, John and Aaron arrived with my newest toy—a 1984 Nomad travel trailer, that a friend of ours, in Medina, had given to me! I have always wanted a guest (house) trailer, and now I have one!

I love that it is a Nomad, too! I told Ben, John, Aaron and Tony, “I know what the word nomad means, but my, soon to be beautiful, travel trailer, the word Nomad will stand for—no mad people are welcome to stay in it—only happy people are welcomed—No Mad.

It is in pretty good shape, and I plan on fixing it up, in my spare time—this Fall! I plan to paint it, redo the walls and floor, etc. I love decorating, and my new / old travel trailer, which I have named The Space Ship—will be a blast to fix up! I can’t wait to get started!

After The Space Ship arrived, I decided to give John Kemmerly an official going away party—even though we are sick about him leaving us. On July 1st, John told us that he was moving on—to Port Aransas. I could just kick myself now, for taking him down there, on Halloween last year!

Tony and I took him, as a bribe to stay with us longer, but it back fired. He fell in love with the town, and made fast friends, with our great friends, Rick, Pete and Kelly!

John’s going away party was planned to start at 5:30, at Jazz, in Kerrville, and I had made reservations. We invited our friends, Jon and Sandy Wolfmueller, Maribeth, Drew and Renee, Ben and Cindy, who all think the world of John.

Around, two o’clock, Ben B. showed up to officially adopt Princess! A few days ago, he had come over with his friends, Ben and Stevie, to check out our dogs, and by the end of his visit, he had picked Princess to be his dog! She is a wonderfully, sweet dog, and she couldn’t wait to jump inside Ben’s truck to start her new life. Yeah, another great adoption! 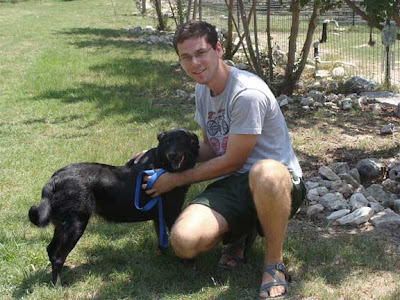 At 4:50, Ben Welch arrived out here, and the three of us took off for Kerrville, allowing us plenty of time to get there. After driving about seven miles, there was a road block—a big eighteen wheeler was stuck on top of the pass, and it had also run out of diesel! So, we had to turn Buttermilk around, and took another route, which added an additional twenty miles to our trip!

At 5:30, still twenty something miles away, Tony suggested that I call Drew to let everyone know that we were running late. So, I did. “I love throwing a party and not being there,” I said to Tony and Ben, as Tony drove faster than he has ever driven—which was actually the speed limit—65 mph!

We arrived at Jazz, at ten minutes till six, the party had already started without us! Everyone was there, having a great time, except Cindy, who was unable to make the party, because she was working on a deadline, for her upcoming documentary. As soon as we sat down, the appetizers were served and the laughter was non-stop!

At one point, Drew told us a funny, personal story, and he had everyone rolling on the floor with laughter! Our meals were delicious, but it was extremely hard to eat them, because of the constant laughing. Our waiter, Steve, was great, too.

The going away party for John was so much fun! Everyone seemed to have had a great time. The only sad part about it was—John is going away. We love him so much—he will be greatly missed—he is family. There is so much more, that I could say about what a great man John is, but I can’t because it will make me cry. And today, I am not going to say goodbye to John, because Tony, Ben, Aaron, Carol, June, Ellen, Charlie and Ellen, Maribeth, Kinky, Jon and Sandy, Cindy, Goat, Brian, Drew and Renee and I are all hoping that John will eventually come back home.

Here is a picture of The Space Ship, before I start renovating it, and turn it into—an out of this world—piece of art. And, yes—pink paint will be included on the pallet! 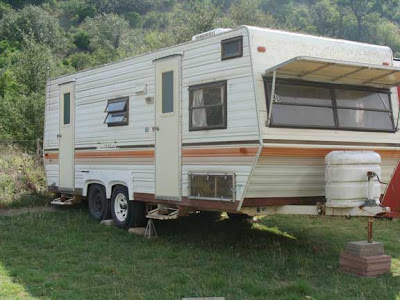