Yesterday afternoon, my dear friend, Sandy Wolfmueller, called to ask if she and her brother, could come out and go into Outer Space with us, and she also wanted to see my Space Ship! I said, “Come on! The countdown has begun!”

I couldn’t wait to show off Outer Space and the Space Ship—I love them, and am so proud of them! Ten minutes before Sandy and her brother showed up—Kinky called!

“Hello, Nance,” Kinky said, and then there was a long pause. “I’m sorry to call, but I have some sad news to tell you.”

“Oh no,” I said. I was scared to hear it and hoping that Perky hadn’t died.

“Our good friend, Danny Young—died yesterday from a heart attack in Austin.”

“No, Kinky,” I said, with tears filling my eyes. “No not Danny. God, I loved that man, Kinky. He was as good as it gets. Always happy, always smiling and always positive—Danny had no negative side to him. I can’t believe Danny is gone. Poor Lu. Listen, Sandy is fixing to be here. I’ve got to go now.” As soon as I hung up the phone, I went to the bathroom, grabbed a washcloth, ran cold water on it, and put it up to my eyes to stop the tears. I took a deep breath and tried to compose myself—I told myself that I would cry later. Little did I know how much.

Sandy and her brother showed up—wearing grins. It was show time for me—smile and don’t think about Danny—try to act happy. I went outside to find Sandy and her brother inside the Space Ship talking to Tony and Aaron. “Nancy, I love this!” Sandy said. “I cannot believe what you have done to this—it was a wreck from the pictures that I saw. This is beautiful!” Her kind words cheered me up. Then Sandy introduced me to her brother.

After spending about ten minutes in the Space Ship with them, I invited them to follow me into Outer Space. They could not wait to go! When we entered Outer Space, Sandy once again was full of compliments. That cheered me up, again. She is such a special lady. Jon is lucky to have her. Kinky, Tony and I adore her.

We sat in Outer Space for about thirty minutes, enjoying the view and visiting. I let Sandy and her brother sit in the best seats, and we rocked away, as Tony showed Sandy his portable Bose iDock. When Allison Kraus started singing, Sandy said, “I love Allison Kraus—crank it up, Tony!” Four of my favorite words.

And, Tony did. Sandy was impressed with the Bose sound system and I am pretty sure that she is going to buy one for her new iPhone, which she is absolutely crazy about.

When it was time for Sandy and her brother, to go over the river and through the woods to see the Kinkster, we said our goodbyes, hugged and then they drove away. When they were out of sight, I told Tony the bad news about Danny Roy Young. Tony shook his head and then he hugged me and the tears flowed again. He knew how much I had loved Danny, and he had heard the many funny stories I had told him about Danny. He had met Danny, eaten at his and Lu’s Texicalli Grill, and had also seen him a couple of other times, and Tony had really liked him, too. Heck, everyone that met or knew Danny loved him—he was like a family member to everyone who met him. He was officially known as the “Mayor of South Austin,” and his motto was—Be Nice! He was and will always be remembered as an Austin treasure!

Before my husband, Jim died back in 1995, Danny used to come to our embroidery shop to place orders for jackets or hats for his great restaurant at least once a month. Whenever he would show up, Jim and I would automatically turn off our embroidery equipment, no matter what deadlines we faced, just so we could visit with Danny! He was funny and the kind of guy, that when he walked into a room—it would light up!

When Lonesome Dove first aired on TV, Danny would come over everyday after an episode to discuss the book and the movie with us! He was so much fun!

One day, Danny showed up at our shop in Westlake, to show Jim and me his latest purchase. It was a stainless steel stomach Steinway! He had had it custom made for him—with a star on it, near the top! A stomach Steinway is a washboard basically, that hangs from your neck and shoulders, and you rub car keys or coins across it to make rhythm. When we saw it, I knew I had to have one, too!

When Jim went into the restroom, I asked Danny— “How much?” Danny told me that he had gotten this guy to make his for $125.00. He told me that if I wanted one he could make it happen! I told Danny that I wanted one just like his—star and all. I quickly wrote him a check for $125.00 and asked him not to discuss the price with Jim.

A few weeks later, Danny came to our shop to deliver my stomach Steinway—star and all! I hung it over my shoulders and grabbed my keys and tried to play it! I wasn’t good, so Danny took it and hung it from his shoulder and began playing the best rhythms. I hated when he quit playing it. After Danny left our shop, I lied and told Jim that it had only cost me $25.00. Even though I knew that Jim wouldn’t care—I lied. Big mistake! Karma caught up with me quickly!

A few weeks later, a customer of ours was inquiring about my stomach Steinway over in the corner of our shop, and Jim said, “We can get you one made for you for only $25.00! They’re really cheap!”

Last night, I received an e-mail from Debora, Little Jewford’s better half, about Danny Roy Young. When I went to Danny’s site, I cried and cried as I read the posted stories that Danny’s friends had posted about him. And, that is why I didn’t post a blog last night. Please say a prayer for his wife, Lu. Here is Danny’s site:
http://www.legacy.com/Statesman/GB/GuestbookView.aspx?PersonId=116105368&PageNo=1

Danny, I will never forget you. Please tell Jim hello for me. I love you and Lu, and always will. Rest in peace and thank you for being my friend. You will live in my heart forever!l Real Love to you and Lu, Cousin Nancy 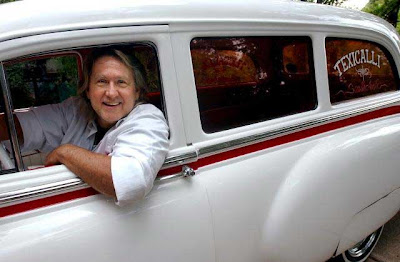 As is often the case for me, a reading of your blog sparks interest and further investigation.

And so it was with your memories of a man I'd never heard about, much less met.

If anyone else is interested, just put "Danny Young South Austin Texas" in your search engine and then pick a link to enjoy reading about this man, who was one of the 'rare' ones that inspire nothing but accolades and tributes. Oh, do I wish I had been given the opportunity to have met him.

Thank you for sharing a fraction of your experiences with Danny, Nancy. I do extend my sincere sympathy to you, Kinky and Tony on your loss of such an incredible friend and a good man.

Mari, thank you so much, i am still crying and can't stop. Danny was the best—he was the cream of the crop! He and Lu were so loved by everyone who knew them! I cannot believe that "Sitting Here IN Limbo" just started playing by The Grateful Dog. Thank you for your comment. I will go to your site that you posted. Danny Roy Young was an Austin icon, along with his wife, Lu.

I saw a "...just be nice.", sticker today, so I was googling it to see if I could find one. Danny was one of the first people I met when I moved to South Austin, and I was floored by how amazing of a guy he was.

Many an afternoon we spent at the Texicalli, and it didn't matter who else was there, we were always treated like VIPs. I would give anything to have Billy bring me out some fried jalapenos and a Dublin Dr. Pepper while Danny regales us with some wild tale.

Excellent blog, thank you for sharing it.