The Deck Is Stacked!

Yesterday, I woke up at 5:30, fed the dogs and the cat and then did paperwork for more than two hours. Then I made Super Smoothies for Tony, Ben, Aaron and me. After drinking breakfast, the guys went to work outside.

I went over to the Lodge and Kinky and I had a short meeting and then I came back to the rescue ranch. When the men were finished feeding the dogs and cleaning their pens—Tony took off for Kerrville, to get three tires fixed. Yes, three tires.

Since Tony was gone, I asked Ben and Aaron to please help me set up the sawhorses, get a table for the chop saw, bring the chop saw, air compressor, extension cords, etc. And, they did.

When I was ready to go to work, I saw them watching me, so I invited them to help me—if they wanted to. Suddenly, I was without a job! Aaron jumped into the Space Ship to measure and use the nail gun, and Ben then became the official ‘wood chopper’ and they went to work fast! I wanted to help, so I became their official ‘gopher girl’—go get this, go get that. It was fun.

In no time flat, one wall after another, went from ugly to beautiful! I wanted the Space Ship to look like a cabin inside, so I bought 1x4’ s and asked them to stack them, so as to sorta look like logs. Ben and Aaron, both being Aquarians (Cardinal signs, too) thought I was crazy, because each of them, had their own ideas, as how it should be done. Here are a few before pictures I took of them—doing it my way. 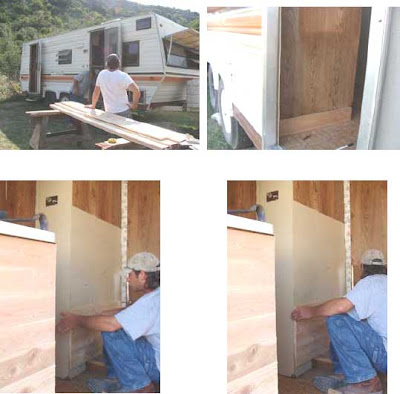 I just love it when the men take over. I love your spaceship!

Cindy, you just confirmed it once and for all: Men are from Mars. LOL!!!!!!

Nancy, I love your new spaceship. And I'm even more happy that the name "Uranus" was already taken.