This morning, I went over to Kinky’s to pick up the letter that Judy Green had written to me, which I really enjoyed reading. Kinky and I visited for a few minutes, and then I came home because he had an interview to do. Before leaving, he told me that he was doing Imus, on Thursday morning, at 7:30 Texas time.

Later in the day, we met up with Kinky at Wolfmueller’s Books. When we arrived Donna S. was there along with Cathy B. and Jim S.! Tony and I already knew Donna, a good friend of Jon and Sandy’s.

We met Donna, last August, when Jon and Sandy brought her out to Echo Hill ranch for an outdoor picnic with Kinky, Marcie, Copper and us. It was a lot of fun and laughs.

During that particular picnic, I told them a funny story about a dumb thing I did back in 1993. I was living in Austin at the time, and owned a very successful embroidery business. One day I received a very important, or so I thought, letter, from the Who’s Who people, telling me that I had been chosen to be in their upcoming South and Southwest 1993-1994 edition! My ego kicked in.

All that I had to do was to fill out their form about myself. So, after work, I went home and filled out the form. (Excuse me, so I can get the book, so I can remember what I told them. It’s on page 616.)

I bragged about: I had been a secretary for one year, for the Fort Worth Fat Stock Show in Fort Worth, a secretary for the TCU Football team, a freelance embroiderer for the movies: Heartbreak Hotel, Hot Spot, Two Aces, country music acts: The Geezinslaw Brothers, Asleep at the Wheel, the Bellamy Brothers, Desert Rose, Willie Nelson, and the world famous golfer—Ben Crenshaw. I also mentioned that I was a member of the Austin Volkswagen Club, etc. The next morning I mailed the form back to them.

Now the stupid kicks in. I decided to buy one copy, even though they encouraged me to buy multiple copies for my friends and family to enjoy. Then I wrote a check for over a hundred dollars and then mailed my order back to them. I was excited and could not wait for the book to arrive! I was officially fixin’ to be somebody—I’m in the Who’s Who book!

The day my book arrived, I stopped what I was doing and quickly opened up my package! I then quickly found my name at the bottom of the page with all of my information that I had sent to them. Then I stood back, examined the book with all of the many names and realized I had wasted a lot of money—thanks to my ego. I felt stupid. I thought to myself, thank goodness, I didn’t buy copies for my friends and family, I could just hear them teasing me and saying things like, “I really loved reading that book. It was so very interesting.” And, I know for sure, that they would have never let me live it down, too.

Then when I opened up the envelope, enclosed with my Who Cares book, I found a certificate—officially announcing me as a subject of biographical record. Wow! I now, had a certificate to prove how dumb I was. Here are the pictures that prove that I’m not the sharpest tool in the shed. And yes, feel free to laugh your head off, because I still do! 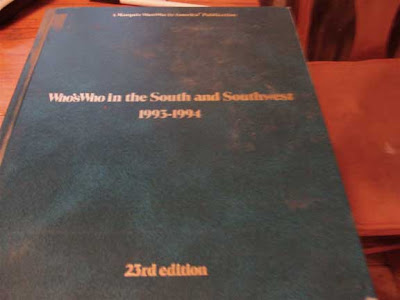 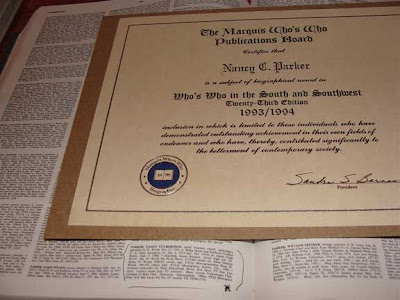 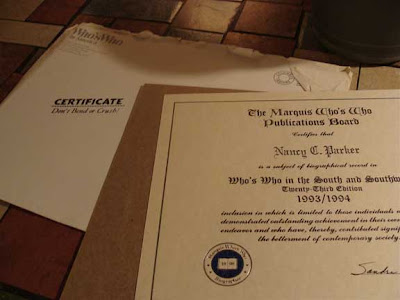 Now, back to today’s story. Donna runs up to me and jokes, “I know you! You’re in that Who’s Who Book!” Then she starts laughing, and told me that she couldn’t resist. After that Donna introduced Tony and me to Jim and Cathy. “Cousin Nancy and Tony run the Utopia Animal Rescue Ranch with Kinky!”

Cathy, who was standing right beside me, sorta froze up, putting her hands to her mouth with excitement! She was acting star-struck, and I’m thinking, maybe she overheard Donna and thinks I am somebody. I then made an announcement. “I think somebody is having a meltdown here. And, it ain’t me.” Everyone laughed, including Cathy.

Cathy was very excited about getting to meet Tony and me and we were honored. She shook our hands, and gave us many compliments about the work that we do, and she told me that she had loved reading my book, too! Then when Sandy announced that they had Tony’s postcards for sale. They grabbed several of them, and bought them up. They are super nice people. I joked to Sandy and Jon, “Gosh, I wish I had something to sell, inside here, besides my book.”

When I announced that Kinky was meeting us there, they really got excited! I told them that I had my camera with me, and would be glad to take pictures of them with Kinky (for my blog). 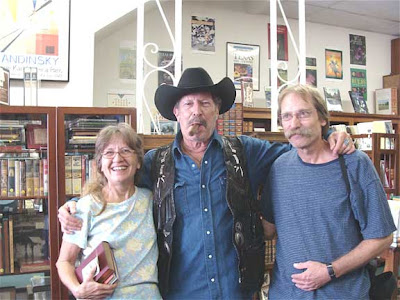 Two minutes later, Kinky strolls into the bookstore, and he was immediately surrounded by three fans! He visited with them for quite a while, and he gladly let them get their pictures taken with him. It was all a lot of fun!
Posted by cousin nancy at 8:00 PM

Thrilling to meet yall! A real hoot to be included in that conversation. You are a precious person! Your family, your friends, your neck of the woods, divine. Sweet Jim, is actually Bob S., Donna's younger brother. What a great chance gathering of very big sweethearts! What a bookstore! later,cb