Today has been great. Yesterday our dear friend Donna Gable Hatch wrote a great article, for The Kerrville Daily Times, about the upcoming Legends Music Series that Kinky is hosting, at The Hunt Store. Yesterday I had planned to post her great article, but because of Sara Lee's awesome rescue/pending adoption, I decided to post the newspaper's article today, so my post wouldn't be so long to read.

Because I use different software than Donna, I had to cut and paste the article together. Here is how it looked, in The Kerrville Daily Times, before I pieced it together for my blog. 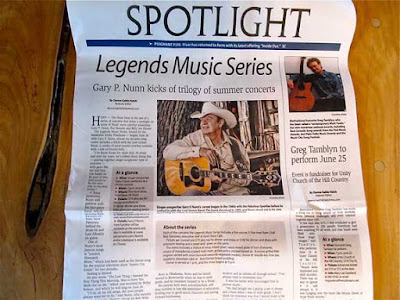 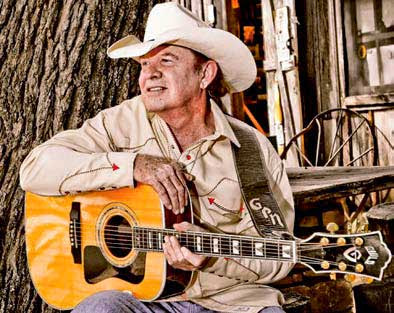 Singer-songwriter Gary P. Nunn’s career began in the 1960s with the Fabulous Sparkles before he
settled in with the Lost Gonzo Band. The band dissolved in 1980, and Nunn struck out in his own,
cementing his status as a musician of note in the years that followed.


HUNT — The Hunt Store is the site of a series of concerts that shine a spotlight on some of Texas’ most colorful musicians: Gary P. Nunn, Ray Benson and Billy Joe Shaver.

The Legends Music Series, hosted by the inimitable Kinky Friedman — begins June 26 with Gary P. Nunn, whose six decades-long career includes a hitch with the Lost Gonzo Band, a combo of socio-cosmic cowboy cowjazz with a dab of Psycho-billy.

“I’ve know Kinky for more than 30 years, and over the years, he’s talked about doing this— putting together singer-songwriter type of concerts — with guys like me and him. I’m happy to be part of this, and proud to be the first one in the first series.”

A Texas institution, Nunn will perform with his four-piece band, which includes Rick Ramirez on bass, Russ Patterson behind the drum kit and Lars Albrecht on guitar.

One of Nunn’s most famous songs is “London Homesick Blues,” which had been used as the theme song for the popular television show “Austin City Limits” for two decades.

He also wrote “The Last Thing I Needed the First Thing This Morning, Was to Have You Walk Out on Me,” which was recorded by Willie Nelson, and which he will sing on June 26.

“I’ll do all my old songs, the ones people always want me to do,” said Nunn, who recently branched out into Western swing ala Bob Wills. “I’ve got 16 albums out and a lot of material, all of which I like. As time goes by, you kinda focus on a group of songs that seem to work consistently with audiences.”

Born in Oklahoma, Nunn and his family moved to Brownsville when he was in sixth grade, and he considers himself to be a Texan.

His parents both were schoolteachers, and they instilled in him the importance of education, holding true to good moral character and paying forward kindnesses.

“I guess we’re all a product of our upbringing, and I had good folks who valued education and music, had good values and were all about helping people,” said Nunn, who was an honors student and an athlete all through school. “I’ve always tried to remember that.”

It was his father who encouraged him to pursue music.

“My dad bought me a guitar, a set of drums and a bass when I was in sixth grade. I don’t think his intention was that I would make a life in music, but just so I’d be able to play for the kinfolks and friends when we got together.”

He and some of his friends from school formed a garage band in eighth grade and were mentored by a group of older, established musicians.

“They taught us a little guitar song called ‘Rebel,’ and we entered a talent show.”

As soon as he stepped on stage, Nunn knew that’s where he belonged.

“We dressed up in little white sports coats and bow ties. The girls all went crazy, and I was pretty much hooked,” Nunn said. “I thought every night was going to be like that.”

In 1967, he moved to Austin and attended the University of Texas, where he was a pharmacy major. While there, he formed The Lavender Hill Express with the late Rusty Weir. Shortly after, Willie Nelson, Jerry Jeff Walker and Michael Murphey landed in Austin, and Nunn began playing with all three.

In 1973, the Texas troubadour helped launch the Outlaw Country movement as a member of the Lost Gonzo Band. The band toured and recorded with many of Texas’ most notable musicians, including Walker, Murphey and Ray Wylie Hubbard.

“From time-to-time, we get together and perform. It’s kind of cool to go back and play those old songs,” he said of the Lost Gonzo Band, which dissolved in 1980. “There’s some pretty good stuff. We all ended up making our own careers independently, which speaks to the amount of talent in the band. The band got Jerry Jeff going, and that’s saying something.”

In the course of his career, Nunn has earned several gold and platinum records for writing, publishing and performing.

And his awards are many.

He was inducted in the Texas Hall of Fame. He was named as a Lone Star Great by the state department of Commerce and Tourism, got a star on the West Texas Walk of Fame — which also honors Buddy Holly, Roy Orbison, Waylon Jennings and Bob Wills, among others — and was chosen as the official Texas Music Ambassador in 2007 by Gov. Rick Perry.

“All of it is pretty great, but I’m so proud of being included in the West Texas Walk of Fame that I can’t stand it. I grew up in West Texas listening to Buddy Holly and Roy Orbison, and to end up on the same monument as those guys is just awesome,” Nunn said. “I really don’t deserve it, but I’ll take it.”

And it all started with his parents, he said.

“My parents were good folks. They encouraged me and set me on a good path from the beginning, and it helped that they were schoolteachers,” he said.

“I’ve had really, really good teachers and coaches growing up, and we’re losing them one-by-one now; they’re all passing. I was an honor student, and I played ball in school — I played ’em all — and I was a pretty good little athlete for a guy my size.

“Some of my music teachers had a tremendous affect on my life. I had a sixth grade band director, Mac Jones, who I’ve been reunited with. He lives out in the Houston area, and he came to see me at one of my shows. My choir director, A.V. Wall, encouraged me and treated me a little special — I guess he recognized I had a little talent — and they both encouraged me and pointed me in the direction I’ve gone,” Nunn said. “It’s amazing how someone can show just a little bit of attention on you and change your whole life."

About the series
Each of the concerts the Legends Music Series includes a five-course, 5-Star meal from Chef Blas Gonzalez, executive chef at Hunt Store Cafe.

Y'all have a great evening!
Posted by cousin nancy at 6:53 PM