Malcolm Not In The Middle!

Today has been great and last night's post was way too long, but I wanted to catch y'all up. This morning was a busy one and this afternoon was so much fun.

I got up real early this morning and did paperwork, cleaned the trailer, washed a load of clothes, before Big G called me, at 7:20, to do my Utopia Animal Rescue Ranch segment. And Big G's, Jay Pennington's, Kinky's, Tony's and my friend, Malcolm Holt, visiting us from England, was in the studio and he did the show with Big G.

Gordon Ames' Pet Of The Week was Hazel. She's a lovely, four-year-old Shepherd mix patiently waiting for her forever family to show up and adopt her. So please come out here soon, because she is starting to think that I've been lying to her when I tell her everyday, "Hang in there, girlfriend. You're going to get adopted sooner than later. I promise." 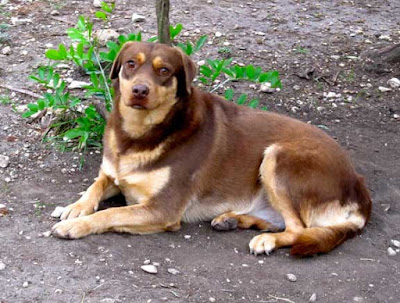 After the fun radio segment with the men, I cooked two complete dinners and froze them, while doing paperwork, returning e-mails, etc. And the reason that I cooked two complete meals to serve four people, is because I am fixin' to go on a road trip aka mini-vacation with Chet O'Keefe. And he and I leaving early Saturday morning, to attend An Imagica/Rites Of Passage Film Premier, in Taos, New Mexico, Sunday night. 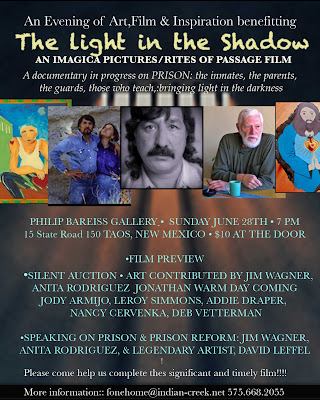 I was planning to go, so I could help my dear friend, Cindy Pickard, with the event and Tony wanted me to go to it too, but he was a little concerned about me driving out there all by myself.

Last week, when Chet returned from his trip, I was telling him about going to Cindy's film premier, in New Mexico and then he tells me that he is going to the film premier, too, because Cindy and Andy had used one of his songs, in their awesome documentary, and she had already asked him, when he went to visit her last week, to please come back for it, so she could introduce him and he could play some of his awesome music. So, we immediately decided to drive out there together and that made Tony and me real happy.

This afternoon around 2:00, our good friends Malcolm Holt and Jay Pennington came out to visit Kinky, Tony and me. Malcolm, Jay, Tony and I had a fun visit, in The Cabin and then all of us went over to see Kinky.

Our fun visit started out, on Kinky's front porch. Then Kinky invited us to come inside, because he wanted us to listen to his new, soon-to-be released CD, in early October. Even though Tony and I have heard it several times, we still enjoyed listening to it, because it is our favorite Kinky CD.

Before we adios-ed Kinky, Kinky autographed Jay's three copies of Sam Kindrick's Action Magazine that was about the magazine's Fabulous, 40th Anniversary Party, at Texas Pride BBQ, because the celebration had raised $10,000 to benefit our rescue ranch. And Jay gave us one of the signed copies, so we can get it framed, too. 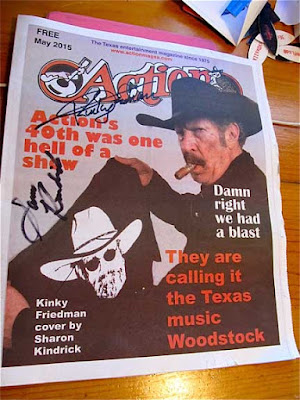 Then we went outside to take a few pictures. And I was so glad that I was wearing my Sasquatch 2014 Research Team t-shirt and had brought along my Area 51 license plate to show to Kinky, because Kinky loved my Area 51 sign and he held it when Tony shot us. From left to right: Malcolm Holt, Kinky, me and Jay Pennington. 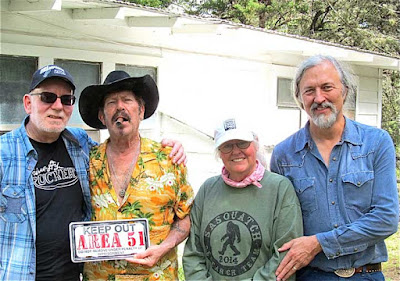 And after Tony had put away his camera, I joked, "Darn it! We should have put Malcolm in the middle." And that's about it for tonight, because I need to start packing a few things.

Y'all have a great evening!
Posted by cousin nancy at 6:48 PM

Nancy!
Just got the note from you in the mailbox.
Great blog!
How do I subscribe?
So happy you liked the present I sent.
Yay! Julia