Today has been great. This afternoon while doing some paperwork, returning phone calls and answering e-mails, a very nice young woman called me about a puppy. We talked for several minutes because I really wanted to help her out, even though we are still over capacity out here, with no space available—especially for a young, small pup.

So I ended up asking Kelly to please send me a picture of the female puppy, in hopes that I could help some how. Minutes later, I checked my e-mail and Kelly wrote:

"Nancy,
This is the puppy from the pair my kids found last Saturday. We found the one sister a home, but really need help finding this little cutie a good home. My husband and I have shown her pics to everyone we know at work and all our friends, but no luck. We gave her a 9-in-1 shot from Tractor Supply and some wormer on Saturday. We already have 2 dogs and are renting a place and I am going to have a baby any day now. We just simply cannot keep her, as much a we love her. I would never put her on an online garage sale, as some people have suggested to me. Any suggestions you have would be greatly appreciated. My work number is @@@@@ and my cell is @@@@@. She is super sweet. When my kids first brought them home, they were very skittish, flea invested and filthy. Now, that this little one feels comfortable with us, she is so loving and sweet. She will make the right person a very good friend. Thank you so much for your time. Kelly"

Then I checked out the three, adorable photos that she had attached to her note. 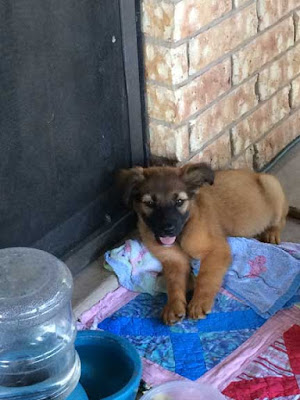 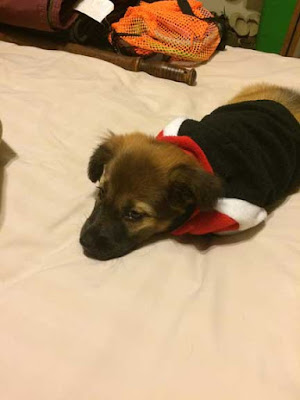 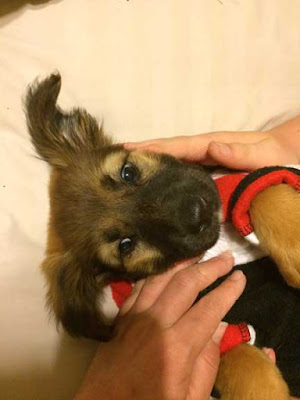 When I looked at the first picture, this adorable puppy had already stolen my heart. So I asked Tony to please come read Kelly's e-mail and check out the pup's pictures. And while he was reading Kelly's note, I said, "Tony, we need to rescue that little puppy. If nothing else, I will adopt her myself, but in the meantime if someone wants to adopt her—I'll let her go...."

A few minutes later I called Kelly back. "Kelly, this is Nancy. We can help. I am going to adopt her, but if someone comes along pretty quick, I will definitely let her go to a great home..."

At 3:00, Kelly called me back to thank us, again and to tell me that she was so happy for the puppy that it made her cry. And that she was leaving work "right now," so she could go home, get the puppy and take it to Hoegemeyer Animal Clinic.

After our conversation I called Kathy, at Hoegemeyers, to tell her that we had an incoming and that I was fixin' to head their way, so I could pick up the pup. And before I took off, in Trigger Tony told me that he would set up our portable puppy pen, in our big room, to make it easier for me when I got back home with the precious cargo. And the reason that Tony couldn't go with me was because the sweet kids, at the Medina Children's Home, would be arriving, around 4:00, to walk our dogs for us.

Five minutes after I arrived, at Hoegemeyer Animal Clinic, someone behind me walked into the clinic and in a familiar voice, she said, "Uh oh, she's here. Maybe I should come back later." Then she started laughing, as I turned around to see our dear friend, Marguerite, standing there.

Then my eyes got big. "Hi, Marguerite! Omg, this is so unbelievable that you've shown up! It's fate!"

After we had quit laughing again, sweet Marguerite says, "I'm afraid to ask, but why is it fate?" The lobby was full of people and pets watching us as I told our good friend the story about this darling, German Shepherd mix puppy. "You already know and I'll have to admit that I'm a big fan of German Shepherds and Odie (the precious, one eyed pup that she adopted from us, in Hoegemeyer's lobby) does need someone younger who will play with him. I can't believe I'm saying this, but I'm interested and I want to take a look at her."

"She is oh so cute, Marguerite! I've just named her Sara Lee, too."

Then Kathy, Dr. Janssen's beautiful, sweet wife, that has a great sense of humor, started teasing Marguerite about falling in love with puppies and not being able to resist the temptation. And by this time, Kathy had everyone in the lobby laughing with us and they were making funny comments, too.

A few minutes later, when one of the nice, young, pretty vet-techs walked into the lobby, cradling Sara Lee, in her arms. Marguerite's heart melted, just like mine had earlier. Seconds later, Marguerite was holding this adorable puppy, in her arms, hugging and kissing her. "Nancy, I want to take her home and give her a try with my dogs, but."

"If it doesn't work out," I interrupted. "It's no big deal, because it just wasn't meant to be. Seriously, there is no pressure and thank you for giving her a chance..." 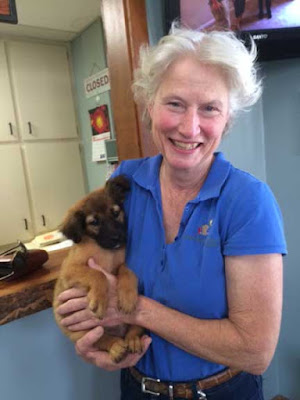 "Nancy," Kathy said. "Kelly left a check for us to give to you and here's a bag of Sara Lee's blanket and stuff."

I took the check and said, "The bag is for Marguerite to take home and..."

"What are you going to name her?" I asked.

"I'm not sure," Marguerite said. "Kathy, did the people who dropped her off have a name for her?"

"Yes, they had named her Scout, after the character, Scout, in To Kill A Mockingbird."

"That's a good name," Marguerite said. "But I need to think about it some more."

When I got back home, I walked inside and saw this. 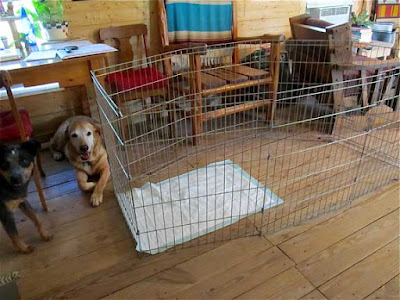 Twenty minutes later, Tony walked inside The Cabin. "Nance, Karon and the kids want to come inside to see the puppy. Where is she?"

I smiled, and said, "She's at Marguerite's house...." Then the kids and Karon walked inside The Cabin and I told them Sara Lee's story. They were very happy for her, but were disappointed about not getting to meet her. And to cheer them up a bit, I sang off key, of course, "Everybody doesn't like something, but nobody doesn't like Sara Lee." And that's about it for tonight. Life is good. (Knock-on-wood)

Y'all have a great evening!
Posted by cousin nancy at 6:43 PM

Hi, Jacquelin! We have our fingers crossed that Sara Lee has found her fabulous, forever home with our dear friend Marguerite. Time will tell. Thanks for the comment and best wishes.

I hope she has the best ever and Forever home!!!

Hi Anon! If Sara Lee fits in with Marguerite's other four-leggers—she'll have the best life ever! Thanks for the comment and keep you fingers crossed for this super sweet puppy.