A Roll! or Flat Tire!

Today has been great. This morning June, Eileen, The Mineral Man, Suzanne and Jim, our great friends/volunteers came out to walk our dogs for us and Jim brought along Ruthie, his super sweet sister-in-law, that is down here visiting them.

Before we all went up to the Koyote Grill, at the Medina Highpoint Resort, to eat lunch together, I invited everyone to come up to The Cabin, because I could not wait to show them my new Mara, Made In Mexico, mugs that I love and am so proud of. 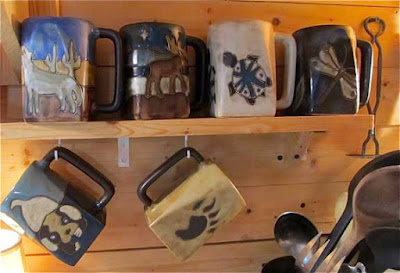 Everyone loved my marvelous, Mara mugs. Ruthie liked the howling coyote, in the desert, mug that she was drinking coffee out of and Eileen was fond of the bear paw mug. Tony's favorite is the dragonfly mug and my favorite mug, for now, is the moose, in the mountains, even though I actually love all six of them.

When all of us took off to go eat lunch together, at the Medina Highpoint Resort's Koyote Grill, Tony and I, who were the last to leave, saw Carol & Bill, our dear friends and newly wed, wave to us as they drove past us, as we were about to turn onto Hwy. 16. And they ended up eating lunch with all of us, too!

Omg, our lunch with our fabulous, fun to be with friends, was so much fun and the food was delicious, too. At one point during our hilarious conversations I told them the story, that I had recently heard, about the famous Gage Hotel's White Buffalo Bar that has a white buffalo head mounted on its wall.

Then I completely changed the subject, because I love buffaloes and white buffaloes are considered sacred by Native Americans. "Last night, for some reason, I was surfing the channels and decided to watch the Science channel. I've never watched the Science channel, because I nearly flunked science, in high school. Anyway, I ended up watching two episodes of NASA's Unexplained Files."

"The first show was titled Did We Nuke Jupiter and it was an investigation about the possibility of NASA intentionally crashing a newly, retired, nuclear spacecraft, from the Apollo program, on Jupiter..." After their eyes quit rolling, several hilarious remarks made, some teasing and a lot of laughter, I realized that I was on a roll, so I decided to tell them about the other NASA's Unexplained Files episode that I had also watched.

"The second episode I watched was about NASA having put one of their sophisticated "land rovers," on Mars, to roam around and take pictures of the planet, so they could learn more about Mars. Anyway, this unmanned, land rover ended up taking several pictures of something it found on the ground, that looked just like a half-eaten jellyroll and none of NASA's brilliant scientists could explain it." Then everyone, at our table, burst out laughing including me.

When the laughter finally subsided, I continued on, "Seriously, I saw the pictures taken of it and it looked just like a half-eaten jellyroll with red jelly on the inside." Then I stopped talking, because everyone was laughing so hard and making hilarious comments about it. "Personally, I am thinking that the jellyroll was left there by a Martian, with a good sense of humor, to be a joke, after an Earth visit."

Then Carol winks at me and jokes, "Yeah, and who knows just how long that half-eaten thing has been on Mars, because the nasty stuff they put in jellyrolls today can take years and years to digest or maybe never disintegrate." And her hilarious remark made all of us roar with laughter.

And that is about it for tonight, because we're fixin' to go outside to do some more mowing. And after that I plan to watch the Science Channel's MythBusters episode, at 8:00, titled Fix A Flat, a 2011 documentary about changing a flat tire without a spare, because I love the Science Channel and need to know this stuff!

Y'all have a great evening!
Posted by cousin nancy at 5:40 PM

I love NASA's unexplained files. It's a hoot. When I met y'all, I lived on Galveston Bay near NASA and had neighbors who worked there.